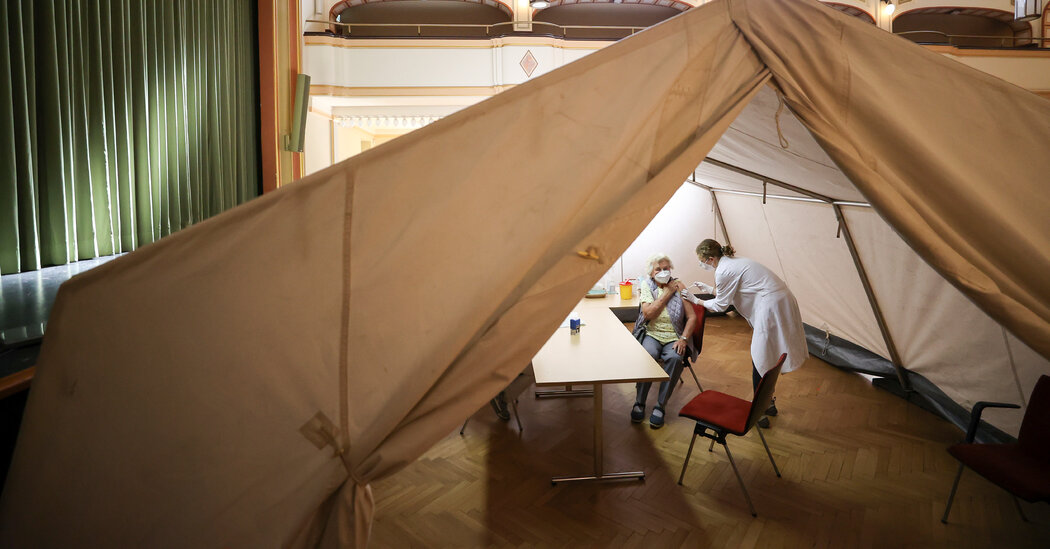 HAMBURG, Germany — When a young woman showed up at Hamburg’s giant Covid vaccination site last week, the city officials who check whether people are eligible were skeptical.

She was in her mid 20s; shots are being given mainly to those 60 and older. But she said she qualified for an exemption because she was caring for her infirm mother and produced a form to make her case. Without a signature from her mother, the form was invalid and the officials turned her away. But she returned quickly, a little too quickly, with the document signed.

This time she claimed to have a sister who was vaccinated for the same reason, but a spot check of inoculation records showed that to be false as well.

“She could not get out of here fast enough,” said Martin Helfrich, a spokesman for the city who witnessed the scene.

Ugur Sahin, the 55-year-old chief executive of BioNTech, the German company that designed the Pfizer vaccine, has said he will also wait his turn.

Germany’s vaccine program is gaining steam, and federal lawmakers have granted new freedoms for the fully vaccinated (as of Wednesday, just under 12 percent of the population), including the right to meet with other inoculated people, shop and travel without testing or quarantining. The move was a clear incentive for Germans who are hoping for a more normal summer (in 2019 Germans took 52 million vacations longer than four days abroad; in 2020 it was only 28 million). But officials say it might also have been a prompt for some to try and get around the priority rules.

AstraZenecaGo, because of its similarity to the popular augmented reality geolocation game Pokemon Go.

Xenia Balzereit, 29, a Berlin journalist, wrote about her lack of shame in taking the initiative to get herself vaccinated with AstraZeneca, the government’s handling of which led to widespread confusion.

“Honestly, my guilty conscience was worse when I cut in line at Berghain in prepandemic times,” she wrote, referring to Berlin’s most famous club.

Family doctors, who started vaccinating in April, have also had much more leeway over whom they choose to vaccinate and why. On Monday both Berlin and the western State of Baden-Württemberg officially dropped vaccine prioritization lists for shots administered by doctors.

But at Hamburg’s vaccine center — the biggest in Germany — priority lists are still in place and enforced.

Kai Pawlik, 43, a coordinator at the vaccine center, says cheats are often easily found out.

Mr. Pawlik, who often has to deal with the less clear-cut cases, says he understands that some people are so desperate to get the shot that they might misrepresent or pretend to misunderstand the rules.

“And on the other hand, of course, there are people who quite brazenly try to take advantage of a system and get ahead,” he said. “And then my sympathy is quite limited.”

Björn Eggers, a 43-year old police officer, who like many other frontline workers is already eligible, came for his second shot on Friday. He was not impressed with the idea of line jumpers.

“If everyone tried to do it,” he said, “we’d have absolute chaos.”

AUSTIN, Texas--(BUSINESS WIRE)--As the first multifamily management company to be recognized in the Public Relations and Marketing Excellence Awards, … END_OF_DOCUMENT_TOKEN_TO_BE_REPLACED

There have been whispers of cooling housing and rental prices in the San Francisco Bay Area, but that hasn't yet translated into practical, noticeable … END_OF_DOCUMENT_TOKEN_TO_BE_REPLACED

Cars pass in Independence Square at twilight in Kyiv, Ukraine, Monday, Oct. 31, 2022. Rolling ... [+] blackouts are increasing across Ukraine as the … END_OF_DOCUMENT_TOKEN_TO_BE_REPLACED