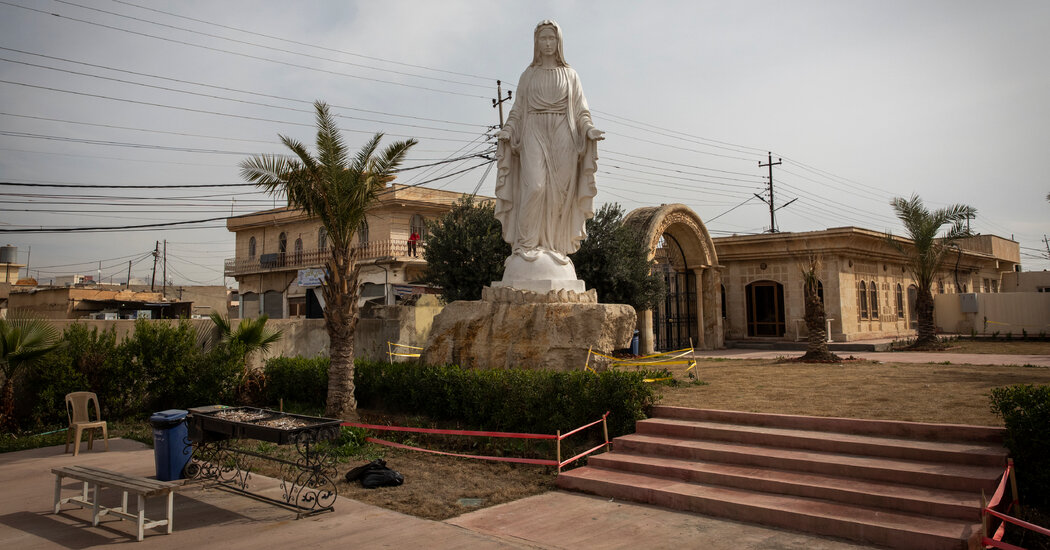 BARTELLA, Iraq — Near the entrance to a small town in northern Iraq, a huge, artificial Christmas tree stands year-round as a symbol of the area’s centuries-old Christian character.

But just down the road, a different kind of symbol illustrates the shift underway in the town of Bartella: a poster with Iran’s Islamic revolutionary leader, Ayatollah Ruhollah Khomeini, gazing down on images of Shiite Muslim fighters who died battling the Islamic State. Nearby, a large iron cross is surrounded by more photos of dead Iraqi fighters, their images often superimposed over pictures of Shiite shrines.

As Pope Francis visits Iraq this week in the first ever papal trip to the country, there are growing fears among Christians that the string of ancient Christian towns across northern Iraq are losing their traditional Christian character, and that their faith is in danger of disappearing from the Muslim-majority country.

The steady exodus of Christians that began after the U.S. invasion in 2003 has only accelerated since ISIS was driven out of Iraq in 2017. The pope’s visit is a show of solidarity with the country’s remaining Christians, whose numbers have shrunk to less than one-third of the 1.5 million who lived here in Saddam Hussein’s time.

Bartella is one of about a dozen historically Christian towns on the Nineveh Plains, where the apostle Saint Thomas is said to have converted the polytheistic population just decades after the death of Jesus. Many Christians there still speak a form of Aramaic, the language of Jesus.

But in Bartella, there’s a demographic twist.

The majority there belong to another Iraqi minority, the Shabak, a small ethnic and linguistic group that is waging its own fight for recognition. Although most Shabak are Shiite Muslims, they have also long suffered from efforts to suppress their culture, including during the time of Saddam Hussein.

That leaves church officials in Bartella, in their effort to retain the town’s diminishing Christian identity, effectively discriminating against another marginalized group.

Worried that Christians could be squeezed out of the traditionally Christian town, the Iraqi government granted church officials the authority to approve building projects and land sales.

The church has used that power to halt development projects that could bring in more Shabaks and other non-Christians.

On the edge of town, a construction project that was to include homes, a shopping center and sports center, lies abandoned. Such a project would normally be welcomed in a region with high unemployment and a housing shortage.

“The project was stopped by the church,” said the Rev. Banham Lalo, a Catholic priest. “People from other areas will buy these houses, from Mosul and from Baghdad. It paves the way for demographic change.”

The project’s developer, Duraid Mikhael, a Christian from nearby Erbil, said he had sunk more than $200,000 into the project before he was ordered to stop in November. He said the development would have employed hundreds of workers over three years, most of them from around Bartella.

“I want to develop the Bartella area but they won’t let me work,” he said.

The divisions between the two ethnic groups can become heated and direct, unusual in a country where most officials are careful to minimize differences and to refer to Iraqis of other faiths as “our brothers.”

“The main problem is Shabak officials,” insisted Father Saadi, the Orthodox priest. “They are changing the identity of Bartella.”

The disagreement often boils down to a contest of which minority is the most disadvantaged.

“Christians ask for their rights and they call themselves oppressed but they are not,” said Saad Qado, director of the Voice of Shabak, a local radio station. “We are oppressed. They have everything.”

“I can take you to Shabak villages that don’t have clean water to drink or a hospital even,” he said. “Some of the villages don’t have schools, but no one cares about us.”

While religious conflict has a long history in Iraq, the current tensions in Bartella are rooted in the town’s capture by the Islamic State in 2014. Both Christians and Shiite Muslims there suffered under the rule of the Sunni terrorist group. Many fled.

The Shabak formed a militia that ultimately helped retake the town in 2016. By then much of it was in ruins.

Church officials say the majority of Christians have not returned.

“Many people came back after the liberation from ISIS and when they saw that their houses were burned and looted and destroyed, they decided to emigrate,” Father Lalo said.

In St. George Syriac Catholic Church, a glass case lined with white satin holds a face of the Virgin Mary with her nose broken, burned chalices and a plaster Jesus on the cross broken off at the torso, all reminders of the damage inflicted by the Islamic State.

“If anyone came to Bartella right after the liberation, he would think this city would never come back because of the level of destruction,” said Ali Iskander, a Shabak and chief of the Bartella district, the de factor mayor.

It was then that the Iraqi government, fearing that historic Christian towns could lose their identity, granted church officials in Bartella and another town, Qaraqosh, the power to regulate development. The pope is planning to visit a church in Qaraqosh on Sunday.

Shabak leaders called the special privilege for Christians unfair, saying they suffered at least as much in the fight against the Islamic State. Moreover, Mr. Qado said, it was the Shabak militia that protected Christians and other villagers from ISIS, and now they are being told they cannot buy houses here.

Mr. Iskander said that he has had trouble finding land to build a house for his family of three wives and 16 children.

“I am a mayor and I have three wives,” he said. “Don’t I deserve to live in Bartella?”

He is happy to live side-by-side with Christians. The continued existence of Christians in Bartella, he said, is “like a flower in the desert.”

But where are his rights? he asks.

“I go to Mosul, they tell you ‘you should go to your areas,’” he said. “I come here and there is no land. Where do I build a house? In the sky?”

Large families like his also represent a demographic threat to the town’s Christians.

“Christians get married and they have maybe a son and a daughter,” he said. “But the Shabak have 15 or 20 children. We have people who marry two or three wives and after a few years they become a tribe.”

Mr. Qado claimed that church officials had even barred women from giving birth at a hospital on the outskirts of town to prevent Shabak children from being issued Bartella identification documents. Church officials say the problem is that the hospital is not recognized by Iraq’s Health Ministry.

Across the street from St. George church, the sisters Amina and Mohinta Sha’ana were supervising Shabak construction workers. The sisters, who are Christian, are retired schoolteachers, and Amina Sha’ana is building a new house in a former olive grove burned by ISIS.

“This land is more precious than gold,” Amina Sha’ana said. “It is the land of my father and grandfather.”

The Shabak, she said, “are good people. But relations are complicated.”

Karam Rafael, 25, one of the few Christians who moved back to Bartella, is among a small minority of young people who do not want to leave. He and his friends scraped up the money to open a small coffee bar.

“My brother and sister are in the U.S., but when I think about emigrating my stomach hurts,” he said. “I can’t leave my traditions, churches and friends behind.”

The poshest place in California's Coachella Valley is The Madison Club. This exclusive gated community in La Quinta is where A-listers and tycoons … END_OF_DOCUMENT_TOKEN_TO_BE_REPLACED

KOROPY, Ukraine — Four men tugged at long strips of fabric to lift a coffin out of the gaping hole in the backyard of a small house. They flung the … END_OF_DOCUMENT_TOKEN_TO_BE_REPLACED