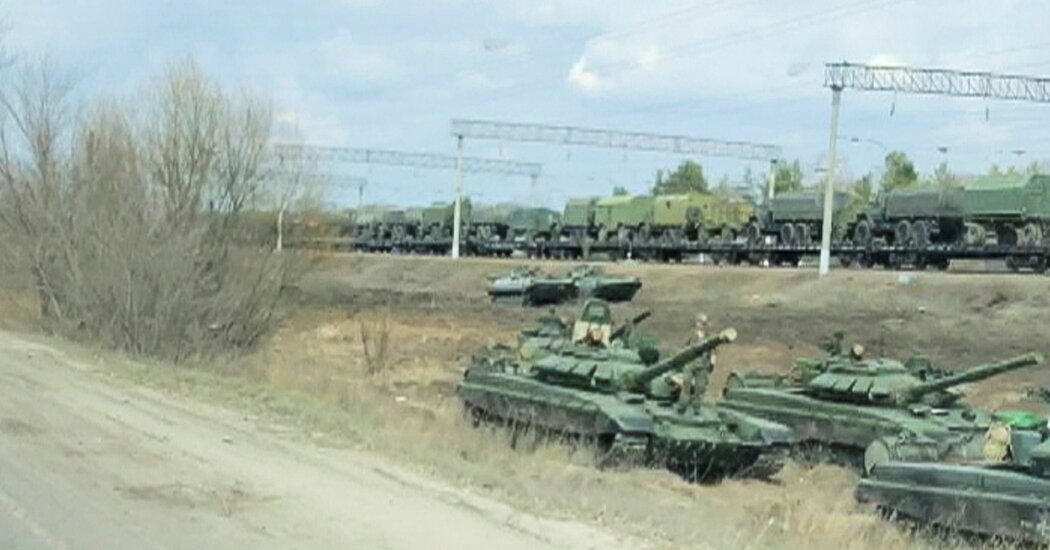 MASLOVKA, Russia — Deep in a pine forest in southern Russia, military trucks, their silhouettes blurred by camouflage netting, appear through the trees. Soldiers in four-wheel-drive vehicles creep along rutted dirt roads. And outside a newly pitched tent camp, sentries, Kalashnikovs slung over their shoulders, pace back and forth.

Over the past month or so, Russia has deployed what analysts are calling the largest military buildup along the border with Ukraine since the outset of Kyiv’s war with Russian-backed separatists seven years ago.

It is far from a clandestine operation: During a trip to southern Russia by a New York Times journalist, evidence of the buildup was everywhere to be seen.

The mobilization is setting off alarms in the North Atlantic Treaty Organization, European capitals and Washington, and is increasingly seen as an early foreign policy test for the Biden administration, which just hit Moscow with a new round of sanctions. Russia responded almost immediately, announcing on Friday that it would expel 10 U.S. diplomats.

“Solar Winds” hacking of government agencies and corporations, various disinformation efforts and the annexation of Crimea.

told European lawmakers on Wednesday that Russia is now garrisoning about 110,000 soldiers near the Ukrainian border. In Washington, the director of the C.I.A. told Congress that it remains unclear whether the buildup is a show of force or preparation for something more ominous.

Even if the goal of the buildup remains unclear, military analysts say it was most certainly meant to be seen. A show of force is hardly a good show if nobody watches.

“They are deploying in a very visible way,” said Michael Kofman, a senior researcher at CNA, a think tank based in Arlington, Va., who has been monitoring the military activity. “They are doing it overtly, so we can see it. It is intentional.”

foreign reporters have been showing up daily to watch the buzz of activity.

Gigantic military trucks are parked within sight of the roads, which have, strangely, remained open to public traffic.

news release to announce the redeployment of the naval landing craft closer to Ukraine, in case anybody was curious. The vessels sailed along rivers and canals connecting the Caspian Sea to the Black Sea. The ministry posted pictures.

forces for a possible incursion.

But Mr. Burns said U.S. officials were still trying to determine if the Kremlin was preparing for military action or merely sending a signal.

AUSTIN, Texas--(BUSINESS WIRE)--As the first multifamily management company to be recognized in the Public Relations and Marketing Excellence Awards, … END_OF_DOCUMENT_TOKEN_TO_BE_REPLACED

There have been whispers of cooling housing and rental prices in the San Francisco Bay Area, but that hasn't yet translated into practical, noticeable … END_OF_DOCUMENT_TOKEN_TO_BE_REPLACED

Cars pass in Independence Square at twilight in Kyiv, Ukraine, Monday, Oct. 31, 2022. Rolling ... [+] blackouts are increasing across Ukraine as the … END_OF_DOCUMENT_TOKEN_TO_BE_REPLACED