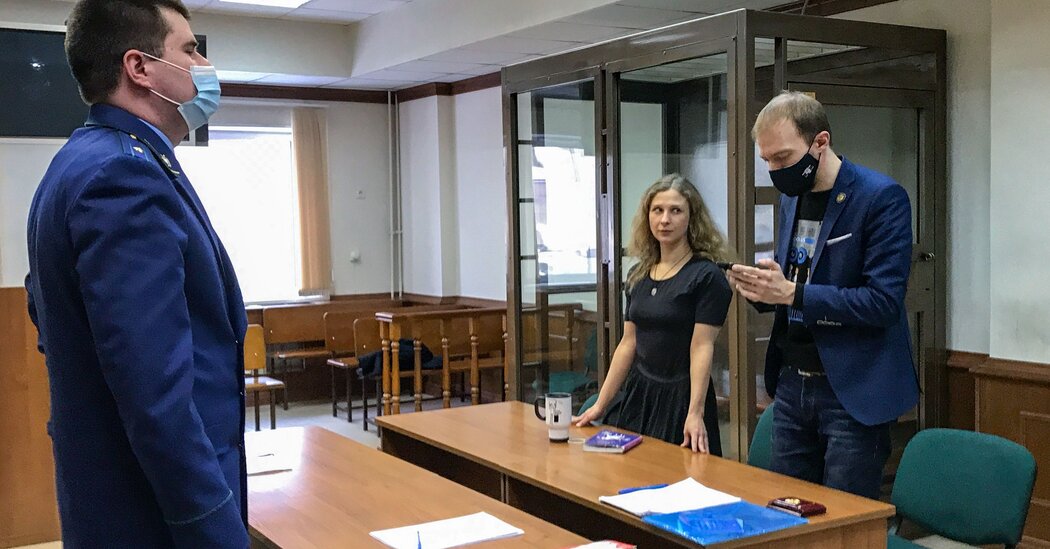 MOSCOW — A Russian court has confined some of the country’s most prominent opposition figures to house arrest on accusations that they violated coronavirus safety rules, in what appears to be a government effort to use the restrictions to muzzle its opponents.

The legal action, known as a “sanitary case,” targets 10 opposition politicians and dissidents, including the senior leadership of Aleksei A. Navalny’s organization and members of the protest group Pussy Riot. All are accused of inciting others to violate rules introduced last spring to slow the spread of the coronavirus. Their lawyers have denied that they did.

Prosecutors say their social media posts promoting a protest in Moscow in January resulted in attendance by 19 people who were legally required to self-isolate because of positive Covid-19 tests, thus putting at risk others who attended.

Defense lawyers say the authorities are cynically twisting coronavirus rules to isolate people who pose no infection risk but are seen by the government as posing a political one.

coronavirus restrictions have infringed on their freedoms as a byproduct of safety measures. But the Russian opposition members argue that the government is using the restrictions against them with the specific aim of curbing their liberty.

Online posts from the opposition figures promoting the protest did not specifically encourage people who were sick to attend, as the government charged, defense lawyers say. Lockdowns in Moscow had in any case been mostly lifted months earlier.

Also, the defense lawyers say, the rules are selectively enforced to restrict opposition activity while allowing pro-government events to go ahead with few restrictions, though the virus would spread as readily at either type of gathering.

Organizers of a series of pro-government rallies in January, at which employees gathered at their workplaces or in stadiums to cheer for President Vladimir V. Putin, faced no repercussions.

lifted restrictions on mass gatherings to celebrate the anniversary of the takeover, an event that is politically beneficial to the Kremlin.

Aa few days earlier, the police rounded up about 200 opposition members of City Councils who had gathered for a conference in Moscow on Saturday, citing violations of mask rules.

The “sanitary case” is the highest-profile action so far. Among those charged are Mr. Navalny’s brother, a spokeswoman for his movement, and a political ally who intends to run for Parliament this year.

Most are forbidden to leave their homes even for walks, recalling the strictest lockdowns of the early phase of the virus response in Russia and some other countries, although restrictions have been mostly lifted for most Russian people.

On Thursday, a Moscow court extended house arrest for four of the defendants until June, and lawyers expect similar rulings for the rest of the group at a hearing on Friday.

Paradoxically, the opposition in Russia had tried to gain traction politically with criticism of Mr. Putin for not imposing stricter measures to control the virus and provide protective gear to medial workers.

That left them vulnerable to just such a crackdown, some observers noted.

“It’s that uncomfortable feeling when you yourself demanded lockdowns,” Aleksandr Kynev, a political commentator, wrote on Facebook. “Sanitary repression will sober you up.”

Whether you optimistically hope that mortgage rates will decline or are resigned that rates will stay elevated above the historic lows of 2021, you … END_OF_DOCUMENT_TOKEN_TO_BE_REPLACED