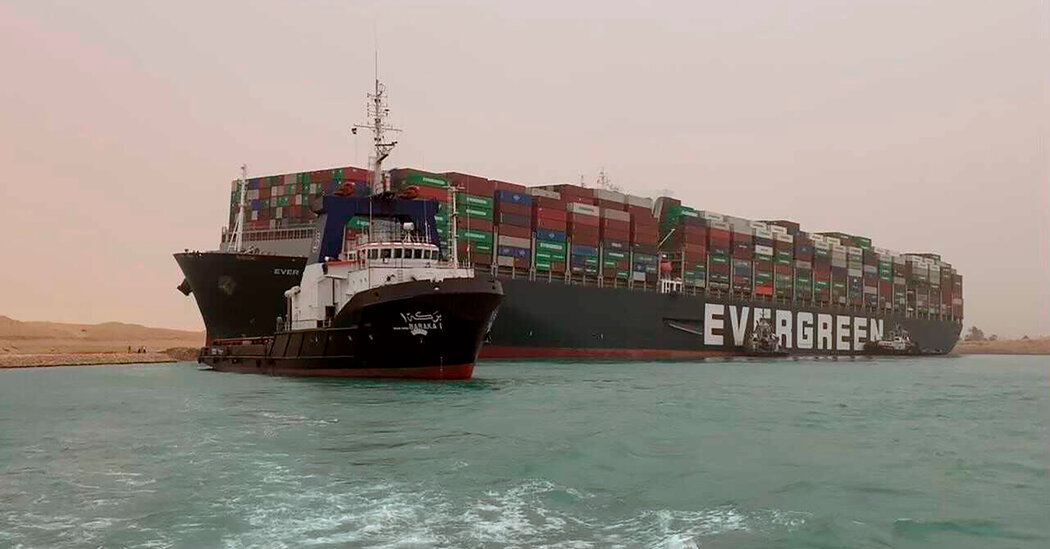 LONDON — The world got another warning this week about the perils of its heavy reliance on global supply chains. As a single ship ran aground in the Suez Canal, shutting down traffic in both directions, international commerce confronted a monumental traffic jam with potentially grave consequences.

The troubled craft is not just any vessel. The Ever Given is one of the world’s largest container ships, with space for 20,000 metal boxes carrying goods across the sea. And the Suez Canal is not just any waterway. It is a vital channel linking the factories of Asia to the affluent customers of Europe, as well as a major conduit for oil.

The fact that one mishap could sow fresh chaos from Los Angeles to Rotterdam to Shanghai underscored the extent to which modern commerce has come to revolve around truly global supply chains.

In recent decades, management experts and consulting firms have championed so-called just-in-time manufacturing to limit costs and boost profits. Rather than waste money stockpiling extra goods in warehouses, companies can depend on the magic of the internet and the global shipping industry to summon what they need as they need it.

energy prices rose on Wednesday, though they pulled back on Thursday. Some are carrying electronics, and clothing, and exercise equipment.

None of them are getting where they are supposed to until the waylaid ship is freed. Each day the stalemate continues holds up goods worth $9.6 billion, according to a Bloomberg analysis.

shipping industry, which has been overwhelmed by the pandemic and its reordering of world trade.

As Americans have contended with lockdowns, they have ordered vast quantities of factory goods from Asia: exercise bikes to compensate for the closure of gyms; printers and computer monitors to turn bedrooms into offices; baking equipment and toys to entertain children cooped up at home.

The surge of orders has exhausted the supply of containers at ports in China. The cost of shipping a container from Asia to North America has more than doubled since November. And at ports from Los Angeles to Seattle, the unloading of those containers has been slowed as dockworkers and truck drivers have been struck by Covid-19 or forced to stay home to attend to children who are out of school.

Delays in unloading spell delays in loading the next shipment. Agricultural exporters in the American Midwest have struggled to secure containers to send soybeans and grains to food processors and animal feed suppliers in Southeast Asia.

This situation has held for four months, while showing few signs of easing. Retailers in North America have been frantically restocking depleted inventories, putting a strain on shipping companies in what is normally the slack season on trans-Pacific routes.

The blockage of the Suez Canal effectively sidelines more containers. The question is how long this lasts.

Two weeks could strand as much as one-fourth of the supply of containers that would normally be in European ports, estimated Christian Roeloffs, chief executive officer of xChange, a shipping consultant in Hamburg, Germany.

Three-fourths of all container ships traveling from Asia to Europe arrived late in February, according to Sea-Intelligence, a research company in Copenhagen. Even a few days of disruption in the Suez could exacerbate that situation.

If the Suez remains clogged for more than a few days, the stakes would rise drastically. Ships now stuck in the canal will find it difficult to turn around and pursue other routes given the narrowness of the channel.

Those now en route to the Suez may opt to head south and navigate around Africa, adding weeks to their journeys and burning additional fuel — a cost ultimately borne by consumers.

Whenever ships again move through the canal, they are likely to arrive at busy ports all at once, forcing many to wait before they can unload — an additional delay.

“This could make a really bad crisis even worse,” said Alan Murphy, the founder of Sea-Intelligence.

The poshest place in California's Coachella Valley is The Madison Club. This exclusive gated community in La Quinta is where A-listers and tycoons … END_OF_DOCUMENT_TOKEN_TO_BE_REPLACED

KOROPY, Ukraine — Four men tugged at long strips of fabric to lift a coffin out of the gaping hole in the backyard of a small house. They flung the … END_OF_DOCUMENT_TOKEN_TO_BE_REPLACED