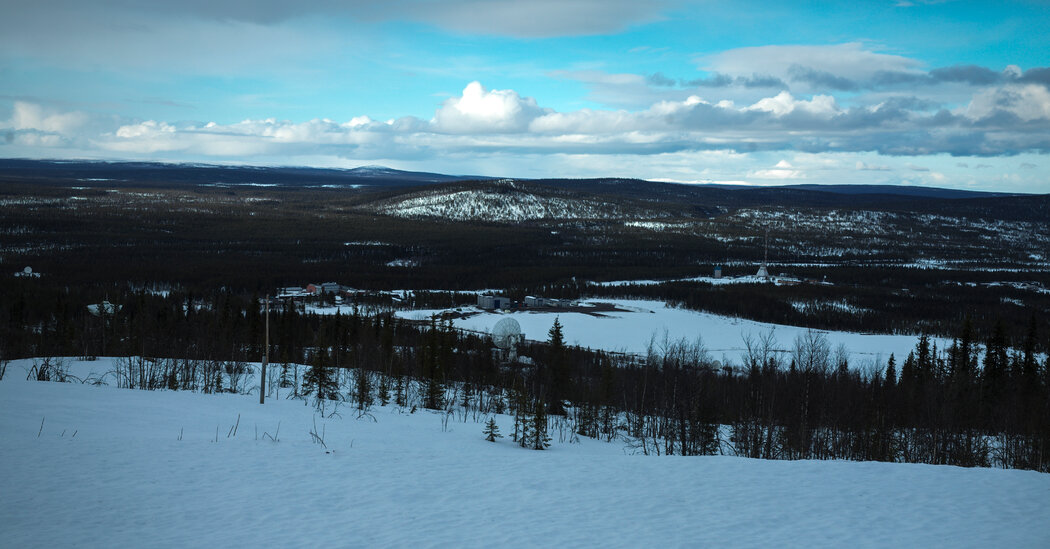 KIRUNA, Sweden — The path to the reindeer herder’s spring home took him across four frozen lakes and countless snowy hilltops. Arriving to a light dusting of snow, the herder, Aslak Allas, switched off his snowmobile, and the overwhelming silence of Sweden’s Arctic settled in.

His reindeer, thousands of them, were nowhere to be seen. “They are very scared of noise,” Mr. Allas, explained, pointing to his vehicle.

He then motioned toward the distant hills dotted with birch trees, their buds swelling with the warming spring sun. “Now, the noise coming from there, that will be something else,” Mr. Allas sighed.

SpaceX. He and several competitors are planning to send up to 50,000 such satellites into space in coming years, compared with fewer than 3,000 out there now.

While the United States, China, Russia and several other countries already have spaceports, Sweden’s would be the first orbital launch site for satellites in Europe — capable of launching spacecraft into orbit around Earth or on interplanetary trajectories. Currently, the intergovernmental European Space Agency launches its traditional single-use Ariane rockets from French Guiana.

Several private European companies are designing spaceports in Europe to host a new generation of smaller rockets. Portugal is looking into building one on the Azores Islands, two remote sites have been allocated in Britain and Norway is upgrading its Andoya Space Center.

Esrange Space Center will be a testing ground for Europe’s first reusable vertical rocket in 2022, and it can conduct engine tests as well.

Swedish Space Corporation, which manages the site, is offering launch services to private ventures wishing to send satellites into space.

“We are a bit of a unicorn in the space business,” said Philip Pahlsson, vice president for strategy and innovation of the Swedish Space Corporation, referring to the government ownership of the site. “But we do plan on being the awesomest company in the government’s portfolio.”

being moved, as the city is slowly sinking into the excavated caverns below.

A 50-foot rocket stands at one of the main intersections, a testament to Sweden’s space ambitions. Space is woven into the fabric of the city.

The Swedish Institute of Space Physics is based in Kiruna, as is the Space High School for gifted teenagers. The space engineering program at Lulea University of Technology, also in Kiruna, attracts Ph.D. students from across Europe. An enormous satellite receiver dish, sticking out from the woods in a vast white valley, serves as a geographical landmark.

Esrange has many of the attributes of other space ports — high fences and warning signs, and some used rockets on display. But it also has a church, a visitor center and the Aurora hotel, named for the northern lights that color the winter skies. Snow is everywhere, of course, and reindeer roam the terrain (no one knows how they get past the fences), but astronauts and moon landers are nowhere to be found.

Themis, after an ancient Greek Titaness who was the personification of divine order.

the fastest pod in Elon Musk’s competition for ultra-high-speed transport in hyperloop, or travel in a vacuum tube. That caught the attention of Bulent Altan, a former vice president at Space X, who decided to back Mr. Fleischmann and his friends.

Sami are the last Indigenous people of Europe and live in Finland, Sweden, Norway and Russia.

In 2019, after an appeal by his district, Mr. Allas managed to block some of the expansion plans for the base, and now his sights are set on the coming noise pollution.

“They might say we need to launch or else we lose our customers, but reindeer herding has been around here long as you can imagine,” Mr. Allas said, adding that a legal battle seemed inevitable. “For us, the Space Corporation is the oldest intruder of our lands, but we have much older rights.”

AUSTIN, Texas--(BUSINESS WIRE)--As the first multifamily management company to be recognized in the Public Relations and Marketing Excellence Awards, … END_OF_DOCUMENT_TOKEN_TO_BE_REPLACED

There have been whispers of cooling housing and rental prices in the San Francisco Bay Area, but that hasn't yet translated into practical, noticeable … END_OF_DOCUMENT_TOKEN_TO_BE_REPLACED

Cars pass in Independence Square at twilight in Kyiv, Ukraine, Monday, Oct. 31, 2022. Rolling ... [+] blackouts are increasing across Ukraine as the … END_OF_DOCUMENT_TOKEN_TO_BE_REPLACED