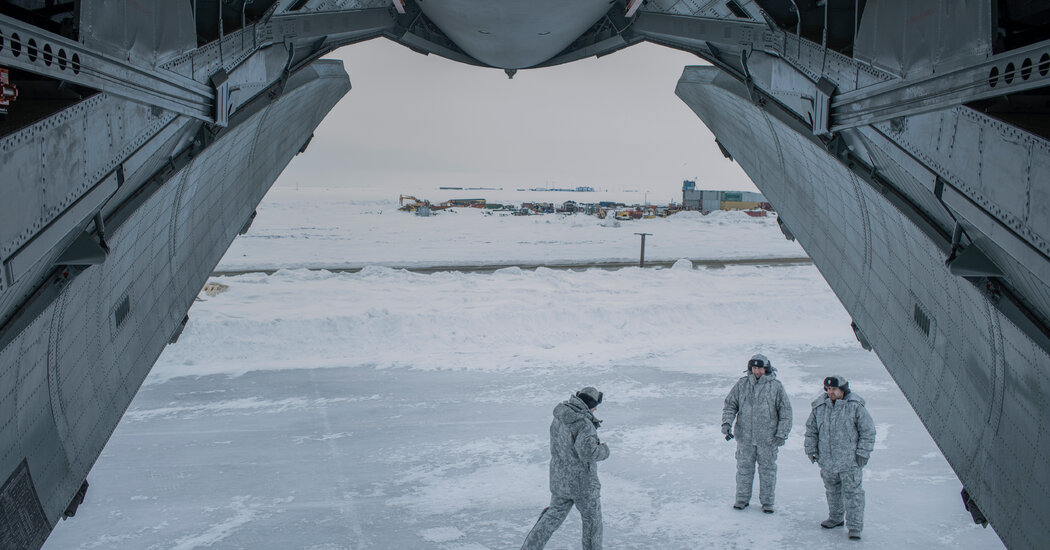 FRANZ JOSEF LAND, Russia — Chunky green trucks carry Bastion anti-ship missiles that can be prepared for launch in just five minutes. A barracks building, sealed off from the elements like a space station, accommodates 150 or so soldiers. And a new runway can handle fighter jets, two of which recently buzzed the North Pole.

Franz Josef Land, a jumble of glacier-covered islands in the Arctic Ocean named after a Austro-Hungarian emperor, was until a few years ago mostly uninhabited, home to polar bears, walruses, sea birds and little else. But thanks to a warming climate, all that is changing, and quickly.

Nowhere on Earth has climate change been so pronounced as in the polar regions. The warming has led to drastic reductions in sea ice, opening up the Arctic to ships during the summer months and exposing Russia to new security threats.

Arctic Council, a diplomatic club of nations, including the United States, that share interests in the region.

National Snow and Ice Data Center said last year. The ocean has lost nearly a million square miles of ice and is expected to be mostly ice-free in the summertime, including at the North Pole, by around the middle of the century.

Lt. Col. Balabeg A. Eminov is the commander of the anti-ship battery and other facilities on Franz Josef Land, called the Trefoil Base. “The main question in the Arctic is the limited accessibility for ships, because of ice,” he said. “Now the area of open water is increasing, and with it the area for ship activity.”

published last year. The latest U.S. military strategy for the Arctic, published in 2019, refers euphemistically to vanishing ice as the “changing physical environment.”

father of the Russian Navy, and oil paintings of sailing ships in battle.

Moored at its base in Murmansk Fjord, the Peter the Great was also visited by flocks of sea gulls, which flapped around its gray-painted radar masts and over the 20 launch tubes for anti-ship missiles. Sailors with side arms stood watch by the gangplank, seemingly oblivious to the cold rain lashing their faces.

Elsewhere in Murmansk Fjord, and not shown to reporters, is another dimension of the Russian military buildup: a secretive program to train seals and beluga whales for as-yet unknown missions. Satellite images have revealed their sea pens at a special operations site. Two years ago, a trained beluga wearing a mysterious harness, possibly an escapee, turned up in Norway and was nicknamed Whaldimir.

posted the footage online. The United States this month sailed the U.S.S. New Mexico, a Virginia-class submarine, into Tromso, Norway, for a rare call at a civilian port.

In the same vein, the tour for foreign journalists to some of Russia’s most remote and secretive military facilities in the Arctic Ocean seemed intended to highlight the country’s capabilities.

“Inviting journalists to come look at these modernized, reinvigorated Cold War sites is all about signaling,” said Marisol Maddox, an Arctic analyst at the Polar Institute of the Woodrow Wilson Center, a research organization in Washington.

Russia, she said, wants to keep up its “strongman persona” in an era of climate change.

AUSTIN, Texas--(BUSINESS WIRE)--As the first multifamily management company to be recognized in the Public Relations and Marketing Excellence Awards, … END_OF_DOCUMENT_TOKEN_TO_BE_REPLACED

There have been whispers of cooling housing and rental prices in the San Francisco Bay Area, but that hasn't yet translated into practical, noticeable … END_OF_DOCUMENT_TOKEN_TO_BE_REPLACED

Cars pass in Independence Square at twilight in Kyiv, Ukraine, Monday, Oct. 31, 2022. Rolling ... [+] blackouts are increasing across Ukraine as the … END_OF_DOCUMENT_TOKEN_TO_BE_REPLACED