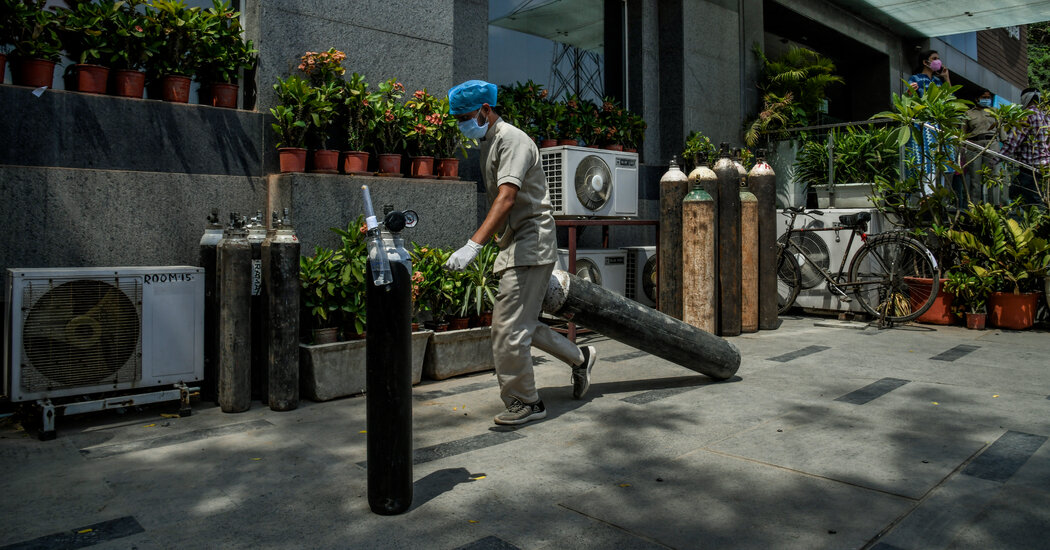 NEW DELHI — Within the world’s worst coronavirus outbreak, few treasures are more coveted than an empty oxygen canister. India’s hospitals desperately need the metal cylinders to store and transport the lifesaving gas as patients across the country gasp for breath.

So a local charity reacted with outrage when one supplier more than doubled the price, to nearly $200 each. The charity called the police, who discovered what could be one of the most brazen, dangerous scams in a country awash with coronavirus-related fraud and black-market profiteering.

The police say the supplier — a business called Varsha Engineering, essentially a scrapyard — had been repainting fire extinguishers and selling them as oxygen canisters. The consequences could be deadly: The less-sturdy fire extinguishers might explode if filled with high-pressure oxygen.

“This guy should be charged with homicide,” said Mukesh Khanna, a volunteer at the charity. “He was playing with lives.” (The owner, now in jail, couldn’t be reached for comment.)

this month that “the moral fabric of the society is dismembered.”

Over the past month, the New Delhi police have arrested more than 210 people on allegations of cheating, hoarding, criminal conspiracy or fraud in connection with Covid-related scams. Similarly, the police in Uttar Pradesh have arrested 160 people.

“I have seen all kinds of predators and all forms of depravity,” said Vikram Singh, a former police chief in Uttar Pradesh, “but this level of predation and depravity I have not seen in the 36 years of my career or in my life.”

have swooped in to connect those in need with lifesaving resources.

The ad hoc system has limits. Vital supplies like oxygen are still stuck in bottlenecks, and people keep dying after hospitals run out. Vaccine and pharmaceutical makers can’t keep up. Politicians in some places are threatening people who publicly plead for supplies.

Infections and deaths are widely believed to be many times more numerous than the official figures indicate, and in hospitals across India, all the beds have been filled and people are dying for lack of oxygen or medicine.

Accusations by one doctor in Madhya Pradesh have gone viral. The doctor, Sanjeev Kumrawat, said he tried to stop a local activist for India’s governing party from selling access to beds in a government hospital where he works. “We all know that to get a bed is a big struggle all around,” Dr. Kumrawat said in an interview. “Government resources are to be distributed equitably and can’t become the property of one person.”

thousands of vials of fake remdesivir during a bust. A tipster led them to a factory where they recovered 3,371 vials that were filled with glucose, water and salt.

Many other doses had already been sold and maybe even put into patients’ bodies, the Gujarat police said, posing a public health risk of unknown scale.

Those who turn to the black market often know they are taking a gamble.

Anirudh Singh Rathore, a 59-year-old cloth trader in New Delhi, was desperately seeking remdesivir for his ill wife, Sadhna. He acquired two vials at the government-mandated price of about $70 each. He needed four more.

Through social media, he found a seller willing to part with four more vials for about five times that price. First, two arrived. When the second two were delivered, he noticed the packaging was different from the first batch. They had been made by different companies, the seller explained.

The Rathores had their doubts, but Sadhna’s oxygen levels were dropping and they were desperate. Mr. Rathore said they gave the doses to the doctors, who injected them without being able to determine whether they were real or fake. On May 3, Ms. Rathore died.

Mr. Rathore filed a police report and one of the sellers was arrested, he said, but he has been racked with guilt.

“I have the regret that probably my wife would have been saved if those injections were original,” he said, adding that the police had sent the vials to be tested.

“People are using the crisis period for their own benefit,” Mr. Rathore said. “This is a moral crisis.”

AUSTIN, Texas--(BUSINESS WIRE)--As the first multifamily management company to be recognized in the Public Relations and Marketing Excellence Awards, … END_OF_DOCUMENT_TOKEN_TO_BE_REPLACED

There have been whispers of cooling housing and rental prices in the San Francisco Bay Area, but that hasn't yet translated into practical, noticeable … END_OF_DOCUMENT_TOKEN_TO_BE_REPLACED

Cars pass in Independence Square at twilight in Kyiv, Ukraine, Monday, Oct. 31, 2022. Rolling ... [+] blackouts are increasing across Ukraine as the … END_OF_DOCUMENT_TOKEN_TO_BE_REPLACED