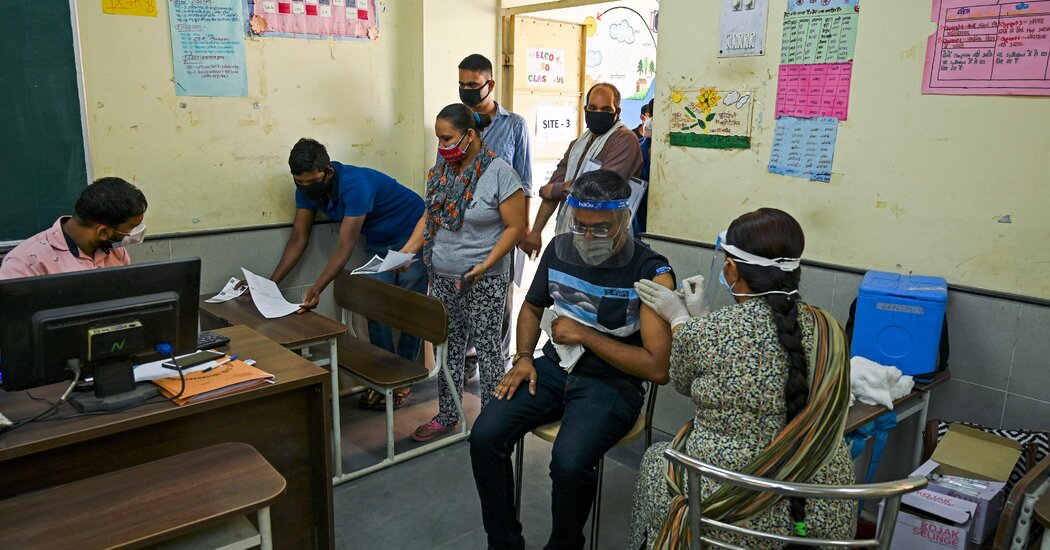 As India recorded a single-day high in new coronavirus cases on Thursday, its vaccination campaign has been marred by shortages and states are competing against one another to get doses, limiting the government’s hope that the country can soon emerge from a devastating outbreak.

The Indian health ministry recorded about 410,000 cases in 24 hours, a new global high, and 3,980 deaths, the highest daily death toll in any country outside the United States. Experts believe the number of actual infections and deaths is much higher.

A second wave of infections exploded last month, and some Indian states reintroduced partial lockdowns, but daily vaccination numbers have fallen. The government said it had administered nearly two million vaccine doses on Thursday, far lower than the 3.5 million doses a day it reached in March. Over the past week, 1.6 million people on average were vaccinated daily in the country of 1.4 billion.

India’s pace of vaccinations has become a source of global concern as its outbreak devastates the nation and spreads into neighboring countries, and as a variant first identified there begins to be found around the world. The outbreak has prompted India to keep vaccine doses produced by its large drug manufacturing industry at home instead of exporting them, slowing down vaccination campaigns elsewhere.

delay the expansion of vaccine access to younger age groups because of shortages.

India also lacks enough doses to meet the growing demand. Two domestic drug companies — the Serum Institute of India, which is manufacturing the vaccine developed by AstraZeneca, and Bharat Biotech, which is making its own vaccine — are producing fewer than 100 million doses per month.

About 3 percent of India’s population has been fully vaccinated, and 9.2 percent of people have received at least one dose. Experts say that at the current rate the country is unlikely to meet Prime Minister Narendra Modi’s target of inoculating 300 million people by August.

India has recorded 20.6 million coronavirus cases and more than 226,000 deaths, according to a New York Times database.

India’s government has said it will fast-track approvals of foreign-made vaccines, and on Wednesday the Biden administration said it would support waiving intellectual property protections for Covid-19 vaccines to increase supplies for lower-income countries.

On Thursday, Sri Lanka became the latest country to bar travelers from India, joining the United States, Britain, Australia and others.

It’s a property that offers a unique open floor plan—plus a hot tub with a view.“It was a Methodist church located in a historic little area of St. … END_OF_DOCUMENT_TOKEN_TO_BE_REPLACED