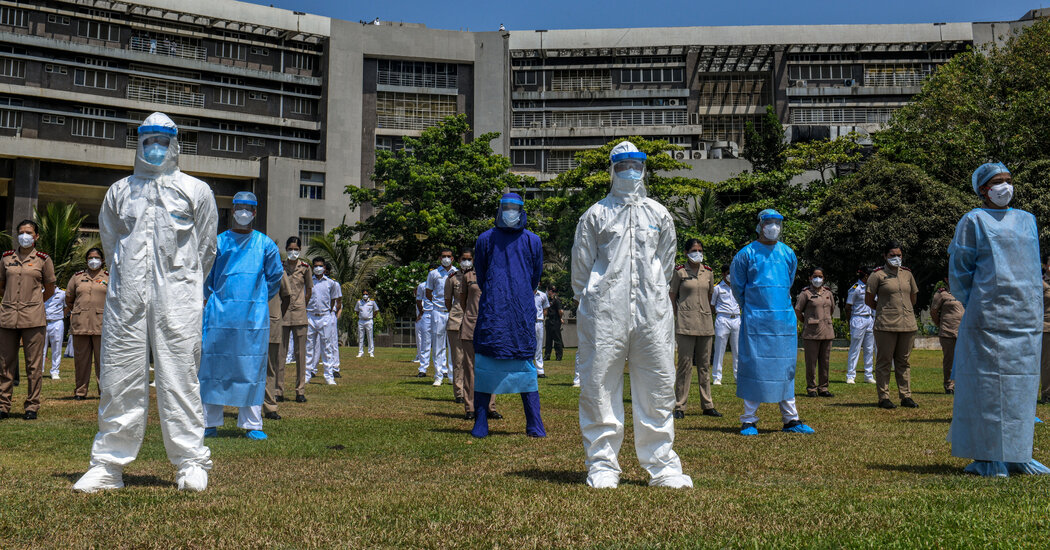 NEW DELHI — The shifts are long, the wards full, the demand so urgent that medical students and interns have been coaxed into filling in. Hundreds of workers have died. Family members at home have fallen ill.

India’s doctors and other medical responders find themselves short-handed and underfunded as they battle the world’s worst coronavirus outbreak. Beyond the physical danger they also face, they have been forced by the devastating size of the outbreak and the government’s mismanagement of the crisis into cruel routines of helplessness, making decisions day after day that could determine whether a patient lives or dies.

to the World Bank, India’s health care spending, public and out of pocket, totals about 3.5 percent of its gross domestic product, less than half of the global average.

They also face intimidation and violence, with videos circulating of angry family members thrashing medical staff in hospital halls covered in blood, or local strongmen bullying and scolding them.

when the hospital ran out of oxygen for 80 minutes early in May. Dr. Himthani had treated Covid patients for 14 months before he and his wife were infected.

As the oxygen ran out, Dr. Shiv Charan Lal Gupta, the director of the hospital and a friend of Dr. Himthani for three decades, ran up and down the hallways sending messages to government officials, media outlets and anybody who might help.

In their masks and gowns, the hospital staff gathered with teary eyes and folded arms at the main gate to pay their final respects as Dr. Himthani’s body was wheeled out. Then they went back to work.

The distribution is unequally concentrated in urban centers. About 40 percent of health care providers work in rural areas, where more than 70 percent of India’s population lives. Bihar, one of India’s poorest states, has only 0.24 beds per 1,000 people, less than one-tenth of the world average.

“When I close my eyes, I feel someone needs my help,” said Lachhami Kumari, a nurse at a government hospital in the Rohtas district of Bihar, one of India’s poorest states. Her 80-bed facility has been overwhelmed by critical Covid patients. “When I manage to fall asleep, I see people all around, begging for help. That has kept me going.”

At another government hospital in Patna, Bihar’s capital city, Dr. Lokesh Tiwari said almost half of the doctors and paramedic staff have lost family members.

on Twitter. “He asked her vitals, thanked me and hung up.”

The Seattle Seahawks are very much still in the running for Baker Mayfield. (Photo by Stacy ... [+] Revere/Getty Images) Getty Images The Seattle … END_OF_DOCUMENT_TOKEN_TO_BE_REPLACED

(CNN) — Kim Kyung-seop recalls going to cheap bars after class with his friends, where they binged on as much makgeolli as possible. "You know the … END_OF_DOCUMENT_TOKEN_TO_BE_REPLACED