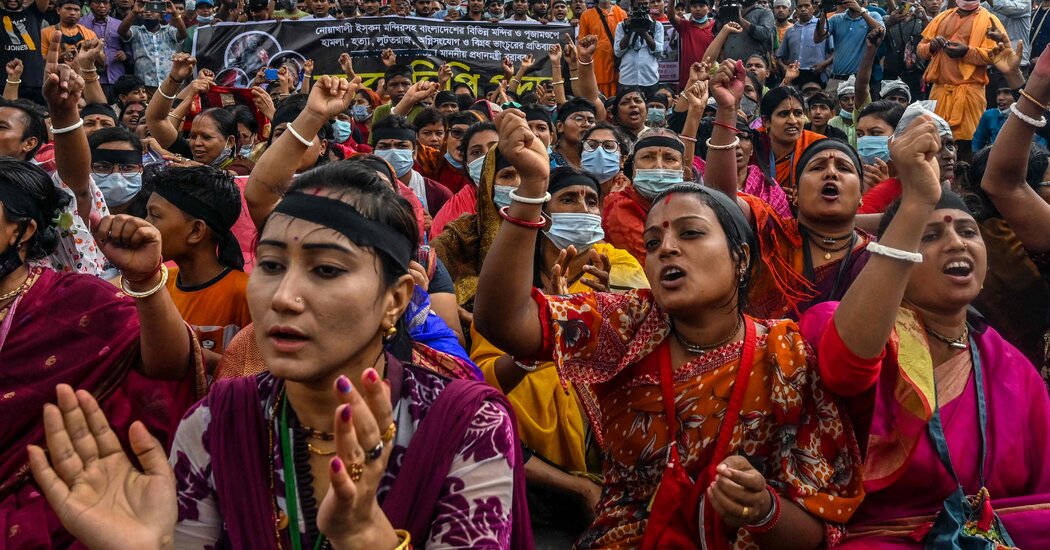 The victims were minority Hindus living in Bangladesh, a majority-Muslim nation grappling with increasing extremism, and the violence drew an outcry from politicians in neighboring India. As the region’s traditional center of gravity, India has a history of promoting tolerance. Prime Minister Narendra Modi has also positioned himself as the champion of Hindus against a history of victimhood.

But the erosion of human rights in India has weakened its moral high ground in a region where ethnic and sectarian tensions are worsening. Sheikh Hasina — Bangladesh’s prime minister and a close ally, who had just sent Mr. Modi 71 red roses on his birthday — had pointed words for India, even as she promised to hunt the culprits.

“We expect that nothing happens there,” Ms. Hasina said, “which could influence any situation in Bangladesh affecting our Hindu community here.”

into a Hindu state. In marginalizing and maligning its minority Muslims at home, Mr. Modi’s government has weakened India’s traditional leadership role of encouraging harmony in a region of many fault lines.

The shift could also open opportunities for China, which has used the promise of investment and access to its hard-charging economy to cultivate stronger relations with its rival’s neighbors.

“The openly partisan approach to communal issues has created a very peculiar situation for us as far as that moral high ground in neighborhood policy is concerned,” said Yashwant Sinha, who was India’s foreign minister when Mr. Modi’s Bharatiya Janata Party was last in power in the early 2000s. “We can’t say ‘you stop it, this should not happen,’ because we ourselves are guilty of it.”

prosperity to the neighborhood.”

seen as discriminating against Muslims.

But such violence and the abuse of minorities is nothing new in South Asia, a region of deep ethnic and religious fault lines that is home to a quarter of the world’s population.

The traumatic partition of India and Pakistan in 1947, and the later war-driven split of Bangladesh from Pakistan in 1971, left sizable ethnic and religious minorities in each country. The domestic policies of one nation inevitably affect the population of another.

Hindutva politics, and they are trying to exploit it,” said Mohammad Tanzimuddin Khan, a professor of international relations at Dhaka University, referring to the B.J.P.’s Hindu nationalist ideology. “And at the same time, the Hindutva politics of India is empowering the B.J.P.-type politics in Bangladesh.”

The violence last month in Bangladesh was set off by rumors that a Quran, the Muslim holy book, had been disrespected in a Hindu temple. Seven people have been killed, the police said.

That violence has further deepened sectarian tension in India. In recent weeks, a right-wing Hindu group has been organizing large protests in the Indian state of Tripura, just over the border from Bangladesh, against the anti-Hindu violence there. Police have had to deploy heavy security to protect mosques, after members of the group vandalized at least one mosque and burned shops. A group of lawyers and activists who went to Tripura to document the damage found themselves charged with violating a draconian antiterror law.

While some B.J.P. officials criticized the violence, Mr. Modi himself has been largely silent. In contrast to Pakistan, where tensions with India sometimes break out into open conflict, Mr. Modi has cultivated good relations with Bangladesh, and harsh words could sour diplomatic ties between New Delhi and Dhaka.

some of the deadliest communal violence in India in 2002 in Gujarat, where Mr. Modi was the state’s chief minister. He said such violence did not affect India’s standing because the country’s prime minister at the time, Atal Bihari Vajpayee, made clear that the episodes were both unacceptable and isolated.

These days, Mr. Sinha said: “The interlocutor can turn back and say ‘Why don’t you practice at home what you preach to us?’”

A sign stands outside an upscale home for sale in the Lake Pointe Subdivision of Austin, Texas.Ed Lallo | Bloomberg | Getty ImagesConsumer confidence … END_OF_DOCUMENT_TOKEN_TO_BE_REPLACED

A famous thatch-roof house designed by Earl Young captivated the web and racked up tens of thousands of clicks. Resembling a mushroom, the unusual … END_OF_DOCUMENT_TOKEN_TO_BE_REPLACED