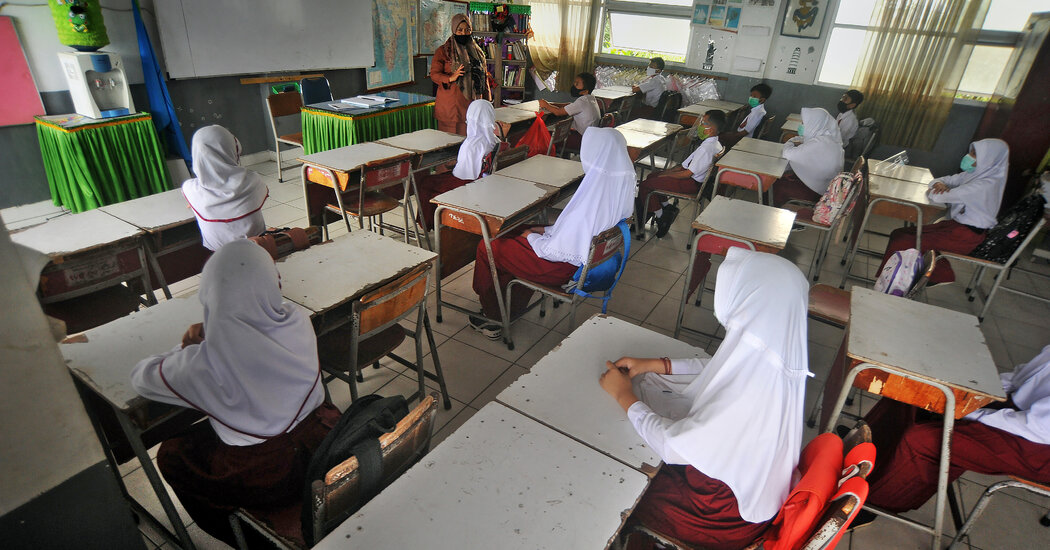 The father, a Christian, was upset that his 16-year-old daughter had been ordered to wear an Islamic head scarf at her public school in Indonesia. He met with the school’s vice principal and protested the rule. And he didn’t stop there: He streamed their conversation on Facebook Live.

“This is a requirement,” the vice principal, Zakri Zaini, sternly told the father, Elianu Hia, during their recorded conversation. “It has been stated in the school regulations.”

The video of the two men’s January conversation, which has been viewed more than 830,000 times, sparked a discussion across the majority-Muslim nation about religious discrimination, and it brought a swift declaration from the national government in support of religious freedom.

a conservative form of Islam, giving rise to greater intolerance of minority groups.

The government’s decree, which declares that public schools cannot “require, order, oblige, encourage or prohibit the use of uniforms with attributes of specific religions,” was lauded by civil rights groups. More significantly, it was held up by the minister of religious affairs as a reaffirmation of Indonesia’s status as a tolerant nation.

The minister, Yaqut Cholil Qoumas, called the head scarf case “the tip of the iceberg” and said the decree was intended, in part, to remind the public that Indonesia is a diverse nation built on pluralism.

“Indonesia is neither a religious state nor a secular state,” said Mr. Yaqut, a leading Muslim cleric and former member of Parliament. “It unites and harmonizes national values ​​and religious values.”

The decree applies to all of Indonesia’s 166,000 public schools except those in Aceh Province, which is semiautonomous and operates under a modified form of Islamic, or Shariah, law. Indonesia’s many religious schools are also exempt from the decree.

The origin of Padang’s head scarf rule came to light when the former mayor, Fauzi Bahar, said he had implemented the policy in 2005. Many people protested at first, he said in an interview, but eventually they complied.

Mr. Hia, 56, an air-conditioning installer, has lived in Padang since 1986, and he and his family are part of a small Christian community.

“I live in harmony in my neighborhood,” he said. “I have good relations with my neighbors. They even support me on this issue and they are Muslim.”

The school had not informed the family of the head scarf rule when she enrolled, Mr. Hia said, and she refused to wear one. She received five warnings before the school summoned Mr. Hia to meet with the vice principal.

Before the meeting, he searched for a provincial or education ministry rule requiring religious attire. He found none.

The situation was so “bizarre,” he said, that he decided to record the meeting and stream it live.

“This is the first time I encountered an incident like this,” he said. “I put it on live so there would be no accusation that I was making things up.”

During the meeting, Mr. Hia argued that it was a violation of his daughter’s rights, and of Indonesian law, for a public school to require her to wear the symbol of another religion.

For her to wear a head scarf, he said, was akin to lying about her religious identity.

But Mr. Zakri argued that the requirement was in the rule book. “It becomes awkward for the teachers when there are children who do not follow the rules,” he said.

After the meeting, father and daughter signed a statement that she was not willing to wear a head scarf as dictated by school regulations, and that they would await a decision from “a more authoritative official.”

Two days later, after the video went viral, the school’s principal, Rusmadi, who like many Indonesians uses only one name, offered a public apology for the way the dress code had been applied. He acknowledged that 23 non-Muslim students had been inappropriately required to wear jilbabs.

“I apologize for any mistakes of the staff,” he said. “It is obligatory to obey the rules. It is not obligatory for non-Muslims to wear Muslim clothes.”

He added, “I guarantee that Jenni can still go to school as usual.”

In the grand sweep of world history, the U.S. is a young country. Even so, there are plenty of homes built prior to the American Revolution that still … END_OF_DOCUMENT_TOKEN_TO_BE_REPLACED

DONETSK REGION, Ukraine — Between the cracks of mortar fire and the metallic bangs of Russian self-detonating mines, Yurii, a Ukrainian Army medic, … END_OF_DOCUMENT_TOKEN_TO_BE_REPLACED