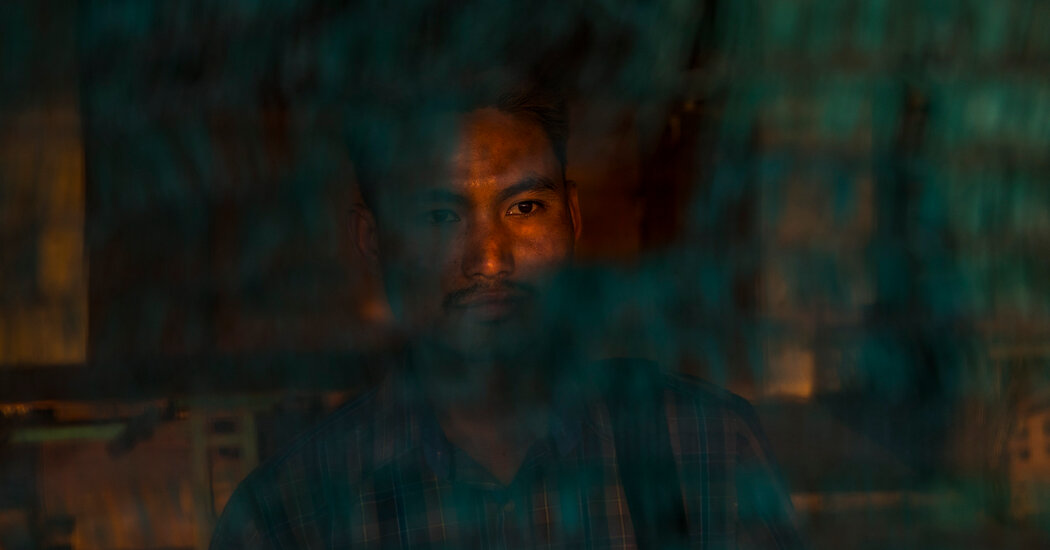 Capt. Tun Myat Aung leaned over the hot pavement in Yangon, Myanmar’s largest city, and picked up bullet casings. Nausea crept into his throat. The shells, he knew, meant that rifles had been used, real bullets fired at real people.

That night, in early March, he logged on to Facebook to discover that several civilians had been killed in Yangon by soldiers of the Tatmadaw, as Myanmar’s military is known. They were men in uniform, just like him.

Days later, the captain, of the 77th Light Infantry Division, notorious for its massacres of civilians across Myanmar, slipped off base and deserted. He is now in hiding.

“I love the military so much,” he said. “But the message I want to give my fellow soldiers is: If you are choosing between the country and the Tatmadaw, please choose the country.”

ousting Myanmar’s civilian leadership last month, setting off nationwide protests, it has only sharpened its savage reputation, killing more than 420 people and assaulting, detaining or torturing thousands of others, according to a monitoring group.

On Saturday, the deadliest day since the Feb. 1 coup, security forces killed more than 100 people, according to the United Nations. Among them were seven children, including two 13-year-old boys and a 5-year-old boy.

In-depth interviews with four officers, two of whom have deserted since the coup, paint a complex picture of an institution that has thoroughly dominated Myanmar for six decades. From the moment they enter boot camp, Tatmadaw troops are taught that they are guardians of a country — and a religion — that will crumble without them.

They occupy a privileged state within a state, in which soldiers live, work and socialize apart from the rest of society, imbibing an ideology that puts them far above the civilian population. The officers described being constantly monitored by their superiors, in barracks and on Facebook. A steady diet of propaganda feeds them notions of enemies at every corner, even on city streets.

The cumulative effect is a bunkered worldview, in which orders to kill unarmed civilians are to be followed without question. While the soldiers say there is some dissatisfaction with the coup, they regard a wholesale breaking of ranks as unlikely. That makes more bloodshed likely in the coming days and months.

Today, the Tatmadaw’s foes are again domestic, not foreign: the millions of people who have poured onto the streets for anti-coup rallies or taken part in strikes.

On Saturday, which was Armed Forces Day, Senior Gen. Min Aung Hlaing, the commander in chief and instigator of the coup, gave a speech vowing to “protect people from all danger.” As tanks and goose-stepping soldiers paraded down the broad avenues of Naypyidaw, the bunker-filled capital built by an earlier junta, security forces shot protesters and bystanders alike, with more than 40 towns seeing violence.

intensity of opposition to the putsch. Officers trained in psychological warfare regularly plant conspiracy theories about democracy in Facebook groups favored by soldiers, according to social media experts and one of the officers who spoke with The Times.

In this paranoid world, the thumping that Ms. Aung San Suu Kyi’s National League for Democracy delivered to the military’s proxy party in last November’s elections was easily portrayed as electoral fraud.

A Muslim cabal, funded by oil-rich sheikhdoms, is accused of trying to destroy the Buddhist faith of Myanmar’s majority. Influential monks, who count army generals among those praying at their feet, preach that the Tatmadaw and Buddhist monkhood must unite to combat Islam.

In the Tatmadaw’s telling, a rapacious West could conquer Myanmar at any moment. Fear of invasion is thought to be one reason that military rulers moved the capital early in this century from Yangon, near the coast, to the landlocked plains of Naypyidaw.

subvert the country with piles of cash for activists and politicians. A military spokesman implied during a news conference that people protesting the coup, too, were foreign-funded.

Captain Tun Myat Aung said that in his first year at the Defense Services Academy, he was shown a film that portrayed democracy activists in 1988 as frenzied animals slicing off soldiers’ heads. In truth, thousands of protesters and others were killed by the Tatmadaw that year.

One of Captain Tun Myat Aung’s men was recently struck in the eye by a projectile from a protester’s slingshot, he said. But the captain acknowledged that the casualties were remarkably lopsided in the other direction.

Tatmadaw Facebook feeds may show soldiers besieged by violent protesters armed with homemade firebombs. But it is the security forces who have assaulted medics, killed children and forced bystanders to crawl in obeisance.

According to the soldiers who spoke with The Times, a suspension of mobile data access over the past two weeks was aimed as much at isolating troops who were beginning to question their orders as it was at cutting off the wider population.

most notoriously against Rohingya Muslims, but they have also targeted other ethnic groups, like the Karen, the Kachin and the Rakhine.

When the 77th Light Infantry Division was fighting in Shan State, in northeastern Myanmar, Captain Tun Myat Aung said he could feel the disgust of people from various ethnic groups. As a member of another ethnic minority, the Chin, he understood their fear of the Bamar majority.

Although he says he shot only to wound, not to kill, Captain Tun Myat Aung spent eight years on the front lines. He developed a rapport with just one group of ethnic minority villagers during that entire time, he said.

“People hate soldiers for what the soldiers did to them,” he said.

But the Tatmadaw also saved him. His mother died when he was 10. His father drank. He was sent to a boarding school for ethnic minority students, where he excelled. At the Defense Services Academy, he studied physics and English.

“The military became my family,” he said. “I was automatically happy when I saw my soldier’s uniform.”

On Feb. 1, in the pre-dawn torpor of Yangon, Captain Tun Myat Aung clambered onto a military truck, half asleep, strapping on his helmet. He didn’t know what was going on until a fellow soldier whispered about a coup.

“At that moment, I felt like I lost hope for Myanmar,” he said.

Days later, he saw his major holding a box of bullets — real ones, not rubber. He cried that night.

“I realized,” he said, “that most of the soldiers see the people as the enemy.”

DALLAS — The rollback of abortion rights has been received by many American women with a sense of shock and fear, and warnings about an ominous … END_OF_DOCUMENT_TOKEN_TO_BE_REPLACED

The poshest place in California's Coachella Valley is The Madison Club. This exclusive gated community in La Quinta is where A-listers and tycoons … END_OF_DOCUMENT_TOKEN_TO_BE_REPLACED