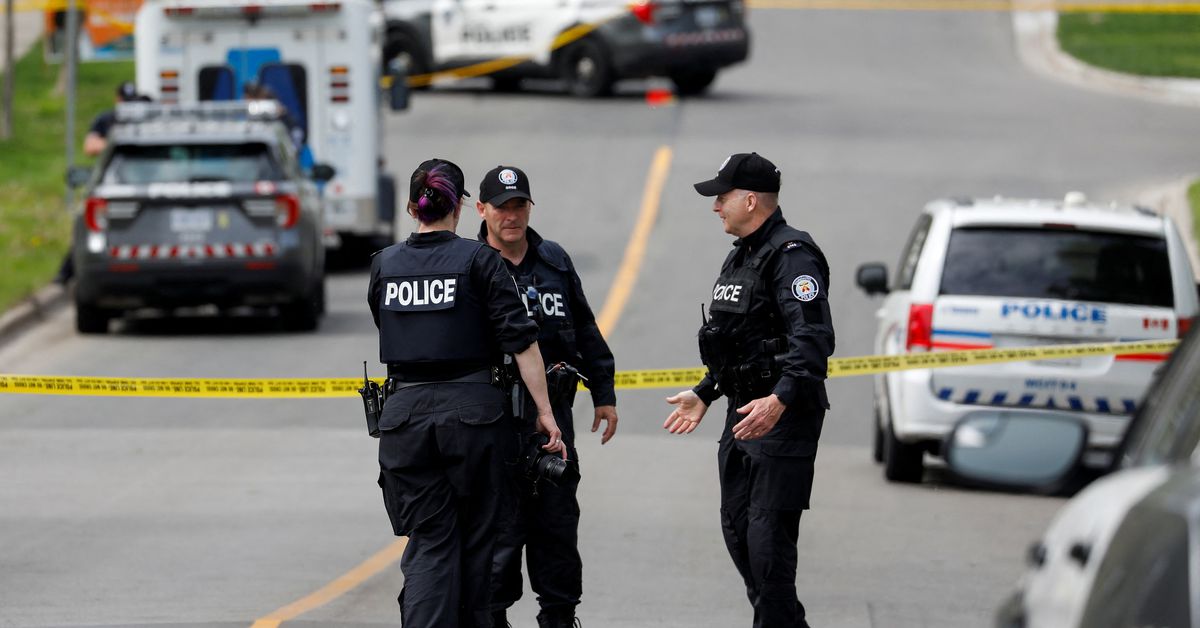 Police officers work at the scene where police shot and injured a suspect who was walking down a city street carrying a gun, as four nearby schools were placed on lockdown, in Toronto, Ontario, Canada, May 26, 2022. REUTERS/Chris Helgren

Ottawa, May 27 (Reuters) – Investigators recovered a pellet gun from the scene where Toronto police shot and killed a man suspected of carrying a rifle in a section of the city that prompted five nearby schools to be placed under precautionary lockdowns.

On Thursday, police went to Scarborough after receiving multiple 911 calls about a man walking with a rifle and located him shortly after, Ontario province’s Special Investigations Unit (SIU) said in a statement on Friday. The man, 27, was pronounced dead about 20 minutes later.

Toronto Police Chief James Ramer told reporters after the incident that officers responding to the calls were confronted by the man, but had declined to give further details, citing an ongoing investigation. This was after police said on Twitter that officers had fired and injured the suspect.

The incident occurred days after a gunman in Texas killed 19 children and two teachers at an elementary school. The Texas shooting raised more concerns about growing gun violence.

Mass shootings are rare in Canada, where gun control laws are stricter than in the United States.

The investigation is ongoing and a post-mortem exam is scheduled for Saturday, said the SIU, which is an independent government agency tasked with investigating the conduct of officials, including police officers.

The SIU aims to complete its investigation within 120 days, which can vary depending on the case.

Canada’s rate of firearm homicides is 0.5 per 100,000 people, far lower than the U.S. rate of 4.12, according to a 2021 analysis by the University of Washington’s Institute for Health Metrics and Evaluation. read more

Reporting by Ismail Shakil in Ottawa; Editing by Bernard Orr

An affordable center-chimney Colonial in Glastonbury, CT, is the oldest property to hit the market this week on Realtor.com®.Offered at a steep … END_OF_DOCUMENT_TOKEN_TO_BE_REPLACED

Nissan was one of the early pioneers of the electric car. The Leaf has now sold over 600,000 units worldwide since its launch in 2011 and is still … END_OF_DOCUMENT_TOKEN_TO_BE_REPLACED

RUDNE, Ukraine — Yurii Brukhal, an electrician by trade, didn’t have a very dangerous role when he volunteered for Ukraine’s territorial defense … END_OF_DOCUMENT_TOKEN_TO_BE_REPLACED