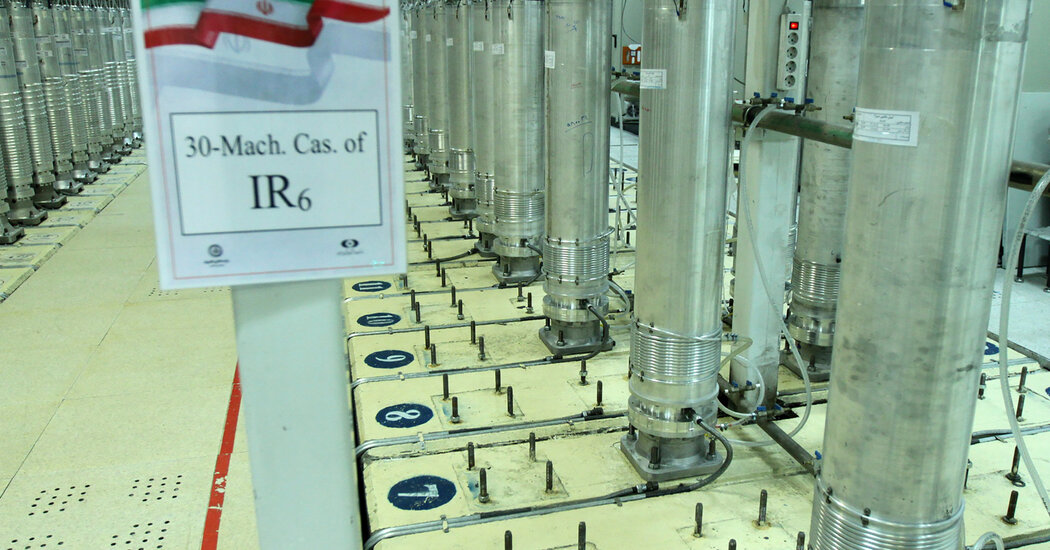 Iran has started enriching its uranium supply to 60 percent purity — the closest the country has ever come to the level needed for a weapon — in response to the sabotage of an Iranian nuclear site last weekend linked to Israel.

The move by Iran, reported Friday on state media, made good on threats Iranian officials had announced after the sabotage, which have cast a new cloud over talks to save the 2015 deal limiting Iran’s nuclear abilities in exchange for sanctions relief.

President Hassan Rouhani of Iran has gone further, boasting as those talks resumed in Vienna that his scientists could easily enrich uranium to 90 percent purity — weapons-grade fuel — although he insisted, as Iranian leaders have repeatedly, that Iran “is never seeking to make an atomic bomb.”

So what is the significance of uranium’s purity, which is at the heart of the accord that negotiators are trying to rescue? And why is Iran making these claims? Some basic questions and answers:

What is the goal of uranium enrichment?

Uranium contains a rare radioactive isotope, called U-235, that can be used to power nuclear reactors at low enrichment levels and to fuel nuclear bombs at much higher levels. The goal of uranium enrichment is to raise the percentage levels of U-235, which is often done through the use of centrifuges — machines that spin a form of unrefined uranium at high speeds.

becomes far easier and requires fewer centrifuges as it moves into the higher purities. In other words, getting to 90 percent purity is much easier starting from 20 percent, and easier still starting from 60 percent.

How much enriched uranium does Iran now possess?

According to the International Atomic Energy Agency, the nuclear-monitoring arm of the United Nations, Iran as of February had amassed 2,967.8 kilograms of uranium — roughly 14 times the limit under the nuclear accord and theoretically enough to power about three atomic bombs if refined to weapons grade. The stockpile includes 17.6 kilograms enriched to 20 percent — also forbidden under the accord until the year 2030.

Did the sabotage last weekend set back Iran’s ability to enrich uranium?

Almost certainly yes. While Iranian officials have given conflicting accounts of the extent of centrifuge damage at Natanz, the sabotaged enrichment complex, at least one has said that several thousand of the machines were destroyed. But Iran also possesses a second known enrichment site, an underground facility called Fordow, that houses roughly 1,000 centrifuges, and some were deployed early this year to enrich uranium to 20 percent.

Mehrzad Boroujerdi, an Iran expert who is a professor and director of the School of Public and International Affairs at Virginia Tech. “It is getting punched left and right, without the ability to do damage to the other side.”

With the 60 percent enrichment, Mr. Boroujerdi said, Iran’s leaders “are trying to resort to any aces they may have.”

AUSTIN, Texas--(BUSINESS WIRE)--As the first multifamily management company to be recognized in the Public Relations and Marketing Excellence Awards, … END_OF_DOCUMENT_TOKEN_TO_BE_REPLACED

There have been whispers of cooling housing and rental prices in the San Francisco Bay Area, but that hasn't yet translated into practical, noticeable … END_OF_DOCUMENT_TOKEN_TO_BE_REPLACED

Cars pass in Independence Square at twilight in Kyiv, Ukraine, Monday, Oct. 31, 2022. Rolling ... [+] blackouts are increasing across Ukraine as the … END_OF_DOCUMENT_TOKEN_TO_BE_REPLACED