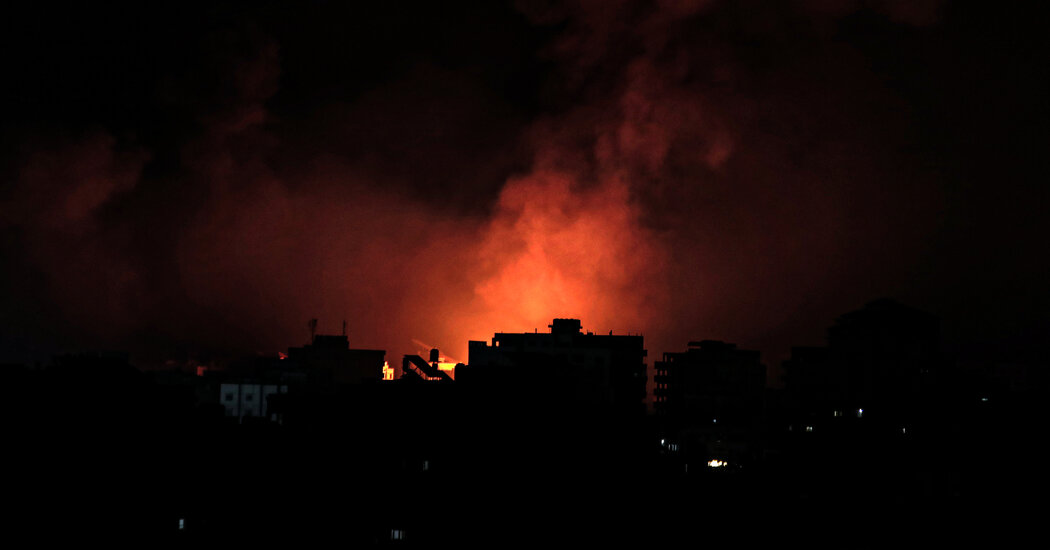 The violence showed no sign of abating on Sunday, as Israel made the single deadliest airstrike yet on Gaza in the weeklong bombing campaign, and the number of rockets fired at Israel from Gaza approached 3,000.

The Israeli bombing in Gaza City killed at least 33 people, including 12 women and eight children, and wounded 50 others, according to Palestinian health authorities. They said the toll was likely to climb as rescuers picked through the rubble searching for victims and survivors.

An Israeli aircraft “struck underground military infrastructure belonging to Hamas terror organization which was located under the road in the relevant area,” an Israeli Defense Forces spokesman said. “The underground military facility collapsed, causing the foundations of the civilian house above to collapse as well, causing unintentional casualties. The aim of the I.D.F. strike was military infrastructure.”

In a separate strike, the Israeli military said it had bombed the home of Yahya Sinwar, the leader of Hamas, the Palestinian militant group that controls the Gaza Strip, in the southern town of Khan Younis. It released a video of the bombing.

At least 192 people — most of them civilians, including 58 children — have been killed by Israeli planes, drones and artillery since the campaign began on Monday, Palestinian officials said.

Israel says it has killed 75 Palestinian militants, primarily Hamas operatives, and accuses the group of using civilians as human shields. In airstrikes that claimed civilian casualties, Israel has often described the targets as weapons caches or militant operations centers.

In Israel, 12 people have been killed by Hamas rockets, Israeli authorities say.

Israeli forces have hit more than 1,500 targets, causing serious damage to Hamas infrastructure, including the network of tunnels it uses to move people and weapons, Prime Minister Benjamin Netanyahu and other top officials said at a press briefing after a meeting of the security cabinet.

“Hamas’s underground has gone down the drain,” he said. “The metro has turned from a strategic asset to a death trap for the terrorists.”

He described Israeli fores as “doing everything we can to minimize as much as possible any harm to civilians.”

Far more rockets have been fired at Israel than in any week of previous conflicts, and some of them have greater range than Hamas’ arsenal has demonstrated in the past. Israeli officials have admitted to being surprised by the reach and intensity of the barrage. Hamas, which has had help from Iran in building increasingly sophisticated rockets, claimed this week that some had a range of 155 miles, far enough to reach any point in Israel.

Israel has intercepted about 1,100 rockets, military officials said on Sunday.

The Israeli military said on Sunday that it had destroyed several underwater drones, unmanned submarines operated by Hamas, at their base on the Mediterranean coast. The drones, armed with explosives, were intended for use against offshore gas drilling rigs, according to Israeli officials.

AUSTIN, Texas--(BUSINESS WIRE)--As the first multifamily management company to be recognized in the Public Relations and Marketing Excellence Awards, … END_OF_DOCUMENT_TOKEN_TO_BE_REPLACED

There have been whispers of cooling housing and rental prices in the San Francisco Bay Area, but that hasn't yet translated into practical, noticeable … END_OF_DOCUMENT_TOKEN_TO_BE_REPLACED

Cars pass in Independence Square at twilight in Kyiv, Ukraine, Monday, Oct. 31, 2022. Rolling ... [+] blackouts are increasing across Ukraine as the … END_OF_DOCUMENT_TOKEN_TO_BE_REPLACED