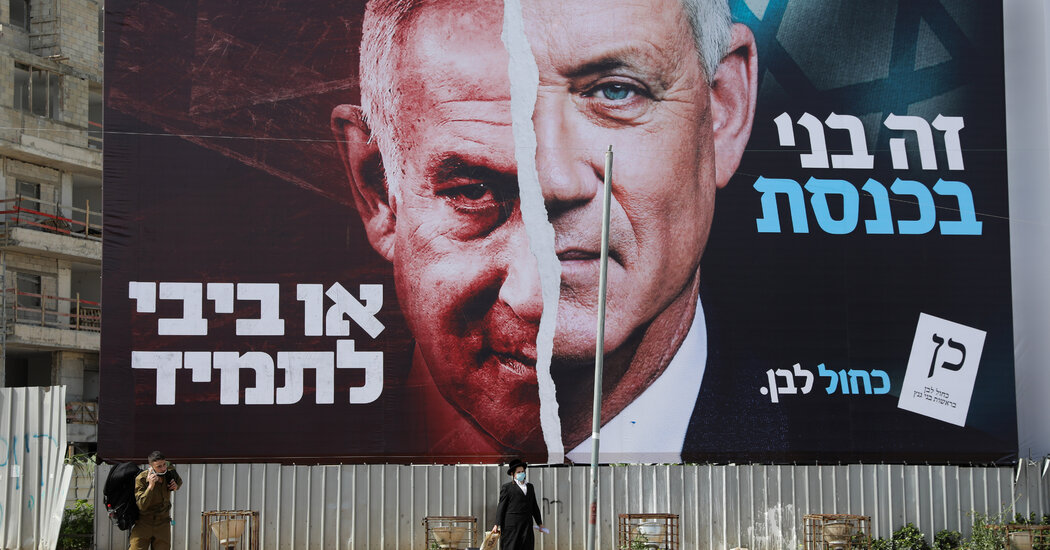 JERUSALEM — Israelis head to the polls on Tuesday for the fourth time in two years, hoping to break a seemingly endless cycle of elections and a political deadlock that has left the country without a national budget during a pandemic.

Prime Minister Benjamin Netanyahu hopes Israel’s world-leading vaccination program, which has helped the country emerge in recent days into something approaching normality, will give him and his right-wing allies an edge and the stable majority that proved elusive in three earlier rounds of elections.

But Mr. Netanyahu, prime minister since 2009, is running for re-election while standing trial on corruption charges — a dynamic that opposition parties hope will prompt voters to finally push him out of office.

In reality, though, polls show that neither bloc has a clear route to a majority, leaving many Israelis bracing for another inconclusive result, and a possible fifth election later in the year.

Parliament to dissolve, forcing a new election, though for now the government remains in place.

than by whether they are for or against Mr. Netanyahu.

a key constituency in this election campaign.

Who are Mr. Netanyahu’s main rivals this time?

In a sign of how the political map has changed, two of Mr. Netanyahu’s principal challengers in this election cycle are also right-wingers. Gideon Saar is a former interior minister for Mr. Netanyahu’s party and Naftali Bennett is Mr. Netanyahu’s former chief of staff.

The third leading challenger is Yair Lapid, a centrist former broadcast journalist whose party is mounting the strongest challenge to Mr. Netanyahu.

Mr. Gantz is no longer considered a viable threat to the prime minister. Polls suggest his party may even fail to win a seat, largely because of anger among his former supporters over his decision to form a unity government with Mr. Netanyahu in the first place, an arrangement he had promised not to join.

How do Israeli elections work?

The Parliament, known in Hebrew as the Knesset, has 120 seats that are allocated on a proportional basis to parties that win more than 3.25 percent of the vote.

The system almost guarantees that no single party will win an outright majority, often giving tiny parties big influence in the deal-making that forms coalitions. The system allows for a broad range of voices in Parliament but forming stable coalitions under it is difficult.

It could take weeks or possibly months for a new government to be formed — if one can be formed — and at any point in the process, a majority of the Knesset could vote to dissolve again, forcing yet another election.

In the days after the election, Reuven Rivlin, Israel’s president, will give one lawmaker four weeks to try to form a coalition. He usually gives that mandate to the leader of the party that won the highest number of seats, which is likely to be Mr. Netanyahu. But he could grant it to another lawmaker, like Mr. Lapid, who he believes has a better chance at pulling together a viable coalition.

If that lawmaker’s efforts break down, the president can give a second candidate another four weeks to form a government. If that process also stutters, Parliament itself can nominate a third candidate to give it a go. And if he or she fails, Parliament dissolves and another election is called.

In the meantime, Mr. Netanyahu will remain caretaker prime minister. If somehow the deadlock continues until November, Mr. Gantz might still succeed him. The power-sharing deal the pair agreed to last April was enshrined into Israeli law, and stipulated that Mr. Gantz would become prime minister in November 2021.

How has the coronavirus affected the election?

In recent weeks, Israel has sent children back to school, reopened restaurants for in-house dining and allowed vaccinated people to attend concerts and theater performances.

Mr. Netanyahu hopes the success of Israel’s vaccine rollout, which has given a majority of Israelis at least one dose, will help propel him to victory.

But his pandemic record may also cost him. Some voters believe he politicized certain key decisions — for instance, capping some fines for flouting antivirus regulations at levels much lower than public health experts recommended.

Critics perceived this as a sop to ultra-Orthodox Israelis, some of whom flouted coronavirus restrictions on mass gatherings. Mr. Netanyahu will need the support of two ultra-Orthodox parties to remain in office after the election.

Voting by mail is not available in Israel. To prevent the spread of the virus, special polling stations are being set up for quarantined people and for Covid-19 patients.

Could there be a fifth election later in the year?

No one is ruling it out. Mr. Netanyahu’s party, Likud, is predicted to emerge as the largest party, with around 30 seats. But his allies may not win enough seats to give him a majority of 61.

And though current polling suggests the opposition parties will collectively win more than 61 seats, it’s unclear whether their profound ideological differences will allow them to come together.

The key player could be Mr. Bennett. Though he wants to replace Mr. Netanyahu, he has also not ruled out joining his government.

Chief Covelli said Mr. Crimo planned the shooting for several weeks, but that the authorities had not yet established what his motive was. “We have no … END_OF_DOCUMENT_TOKEN_TO_BE_REPLACED

Kevin McKenzie and Martine van Hamel were standing in the dining room of their weekend house in Woodstock, N.Y., trying to figure out when they got … END_OF_DOCUMENT_TOKEN_TO_BE_REPLACED