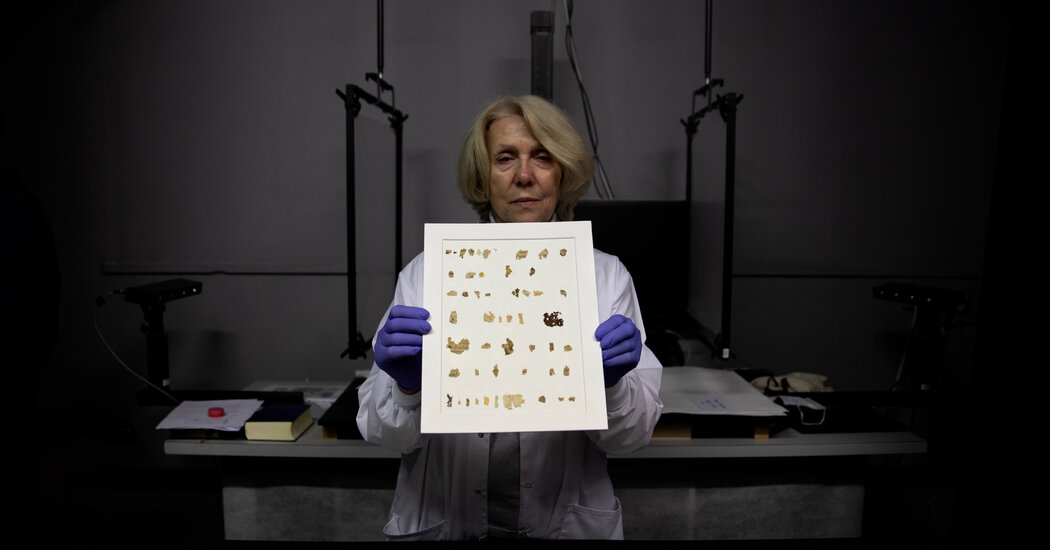 The parchment fragments, ranging from just a few millimeters to a thumbnail in size, are the first in about 60 years to have been unearthed in archaeological excavations in the Judean Desert. They were found as part of a four-year Israeli national project to prevent further looting of antiquities from the remote caves and crevices of the desert east and southeast of Jerusalem, which straddles the boundary of Israel and the occupied West Bank.

The project turned up many other rare and historic finds, including a large woven basket with a lid that has been dated to approximately 10,500 years ago and may be the oldest such intact basket in the world. The archaeologists also found a 6,000-year-old, partially mummified skeleton of a child buried in the fetal position and wrapped in a cloth.

fragments of the scrolls.

academic debate around the world.

The arid conditions of the Judean Desert provided a unique environment for the natural preservation of artifacts and organic materials that would ordinarily not have withstood the test of time.

The latest fragments come from a scroll that was first discovered in the so-called Horror Cave, south of Ein Gedi in Israeli territory. Written in Greek by two scribes, it dates from the period of the Bar Kokhba revolt, almost 1,900 years ago, when Jewish rebels fled with their families and hid from the Romans in the caves.

The Romans discovered and besieged the refugees in the Horror Cave until they starved to death there. The first archaeologists to arrive in the last century found their skulls and bones placed in baskets in the cavern.

The new fragments contain verses from Zechariah 8:16-17, including part of the name of God written in ancient Hebrew, and verses from Nahum 1:5-6, both from the biblical Book of the Twelve Minor Prophets.

Experts managed to reconstruct 11 lines of text from Zechariah, including the verses, “These are the things you are to do: Speak the truth to one another, render true and perfect justice in your gates. And do not contrive evil against one another, and do not love perjury, because all those are things that I hate — declares the Lord.”

Oren Ableman, a member of the Antiquities Authority team who conserved and studied the new fragments, described the artifacts as “another small piece of the puzzle of the past.”

Speaking in the laboratories of the Israel Museum in Jerusalem where the fragments were displayed for reporters on Tuesday morning, he said the concept of equal justice for all was laid out in these verses that “are read by people and are meaningful to people to this very day.”

Phil Shell loves the Bay Area and its real estate market. He’s been building his career here as an agent over the past eight years, but even he hasn’t … END_OF_DOCUMENT_TOKEN_TO_BE_REPLACED

DS4 Cross DS The Plug-in hybrid seems the perfect answer to the electric car dilemma; battery power for all your local needs and a traditional motor … END_OF_DOCUMENT_TOKEN_TO_BE_REPLACED