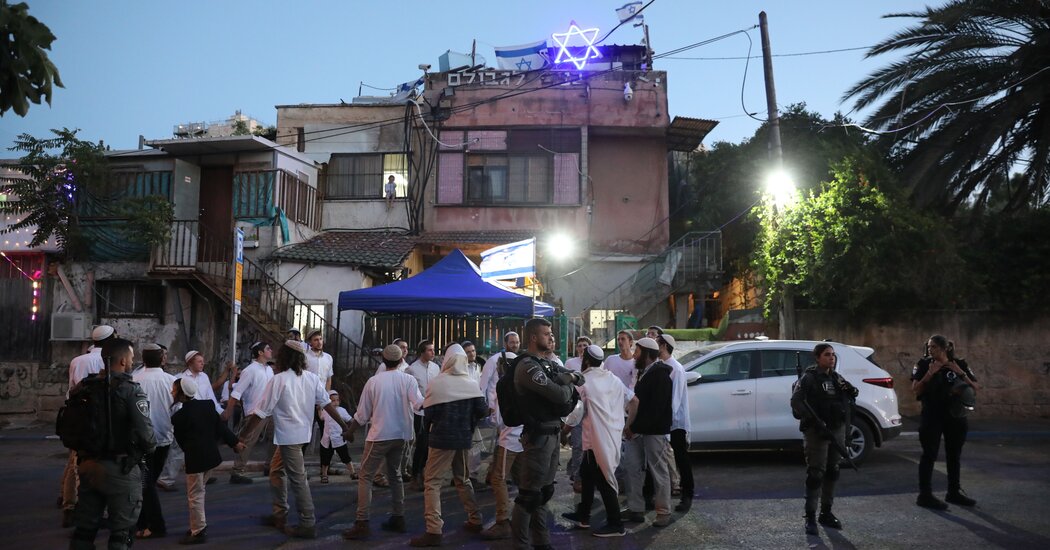 JERUSALEM — The Israeli Supreme Court delayed on Sunday a decision on whether to expel six Palestinian families from their homes in East Jerusalem after the attorney general requested more time, in part because of the tensions the case has stirred.

The court was to decide on Monday whether to uphold an expulsion order for the families in the Palestinian neighborhood of Sheikh Jarrah in East Jerusalem, in a hearing that many feared would set off a wave of unrest. Instead, the case was delayed by up to 30 days to allow the attorney general, Avichai Mandelblit, to review it.

For many Palestinians, the families’ plight has become emblematic of a wider effort to remove Palestinians from parts of East Jerusalem and of the past displacements of Arabs in the occupied territories and within Israel.

Since the start of the month, the prospect of the evictions has prompted daily protests, arrests and confrontations between Palestinians and the Israeli police and Jewish extremists.

form of apartheid and the United Nations rights agency says is a potential war crime.

Some city officials deny that the replacement of Palestinian families by Jewish settlers amounts to a strategy of displacement. Sheikh Jarrah “is not a political but a legal dispute” over land ownership, said Fleur Hassan-Nahoum, a deputy mayor of Jerusalem.

But others in the city leadership say it is part of a concerted effort to reinforce Jewish control of East Jerusalem and prevent it from being ceded in putative future peace negotiations to a Palestinian state.

Another deputy mayor, Aryeh King, said on Friday that it was “of course” part of a wider strategy of placing “layers of Jews” throughout the eastern half of the city. The goal, Mr. King said, is “to secure the future of Jerusalem as a Jewish capital for the Jewish people.”

Israel captured East Jerusalem in the 1967 Arab-Israeli war and annexed it.

Settlers in the neighborhood consider the Palestinians squatters on land that was historically owned by Jews. They said the court decision on Sunday was a sign of government weakness.

“I am so sorry that the Israeli government is afraid of the violence of a few young Arab people,” said Yonatan Yosef, a settler leader who lives in Sheikh Jarrah. But he promised that settlers would continue with their efforts to force Palestinians out of the neighborhood.

“The Israeli people will go back to their land, and those who don’t want that should go home,” Mr. Yosef said.

Peace Now, a campaign group that documents the expulsions of Palestinians in East Jerusalem, estimated that 200 Palestinian properties in strategic locations near the Old City of Jerusalem, housing several thousand residents, were at risk of eviction.

Up to 20,000 Palestinian homes across the city are under threat of demolition, according to Peace Now. Restrictions on building permits in East Jerusalem have forced Palestinian residents to either leave the city or to build illegal housing vulnerable to demolition orders.

The dispute in Sheikh Jarrah originated in 1876 when the land was under Ottoman rule. That year, Palestinian landowners sold a plot in Sheikh Jarrah to two Jewish trusts, an Israeli court has ruled. The land houses the tomb of a revered Jewish priest from antiquity, Shimon HaTzadik.

Jordan captured the plot in the Arab-Israeli war of 1948 and built dozens of homes there to house some of the hundreds of thousands of Palestinian refugees who had fled from what became Israel.

After Israel captured East Jerusalem in 1967, it eventually returned ownership of the Sheikh Jarrah homes to the Jewish trusts. The trusts later sold it to right-wing settlers, who have tried to evict the residents ever since. Some families have already been forced out, while the others are in various stages of the court process.

The case has foregrounded the imbalance in who gets to reclaim land in Jerusalem. In East Jerusalem, Jews are allowed to reclaim property that was under Jewish ownership before 1948. But Palestinian families have no legal mechanism to reclaim land they owned in West Jerusalem or anywhere else in Israel.

Israelis defend the policy on the grounds that changing it would undermine the Jewish character of the world’s only Jewish state.

The Seattle Seahawks are very much still in the running for Baker Mayfield. (Photo by Stacy ... [+] Revere/Getty Images) Getty Images The Seattle … END_OF_DOCUMENT_TOKEN_TO_BE_REPLACED

(CNN) — Kim Kyung-seop recalls going to cheap bars after class with his friends, where they binged on as much makgeolli as possible. "You know the … END_OF_DOCUMENT_TOKEN_TO_BE_REPLACED