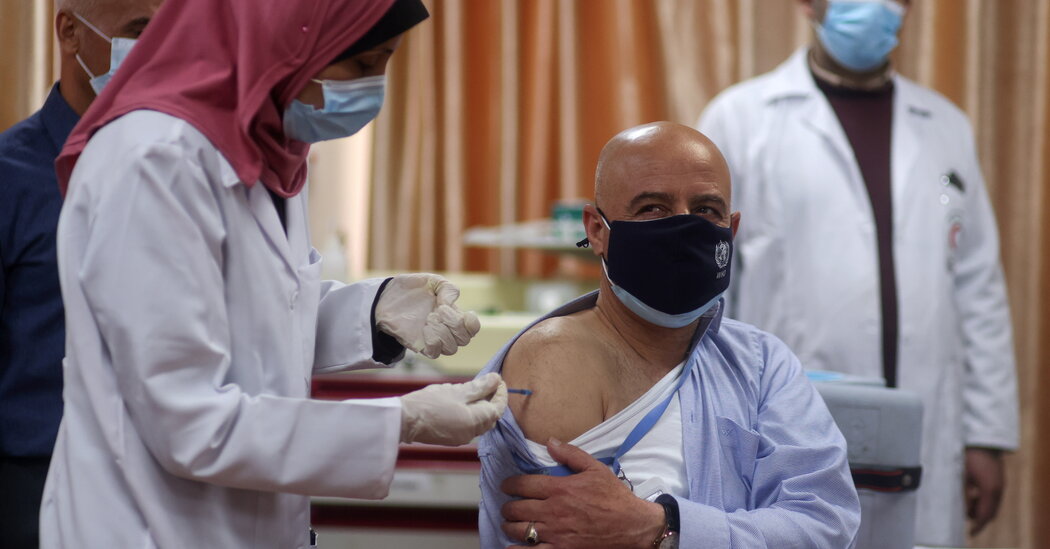 Israel’s airstrikes and shelling of Gaza have stopped all Covid-19 vaccinations and testing in the Palestinian enclave and raise the risk of super-spreading as civilians cram into shelters for safety, United Nations officials said.

In an interview over Zoom on Friday as the sound of Israeli explosions shook their headquarters, the leaders of the U.N. Palestinian relief agency’s operations in Gaza and the head of the World Health Organization’s Gaza sub-office said they feared that a severe worsening of Covid-19 infections would be a side-effect of the death and destruction from the latest surge in hostilities.

The number of people in Gaza sickened from Covid-19 had been “just leveling off, and then this hit,” said the U.N. agency official, Matthias Schmale. “It is a grim situation.”

He said that unvaccinated Gazans were crowding into the schools run by his agency, known as the United Nations Relief and Works Agency, because the Israelis do not intentionally target those buildings — in effect making them bomb shelters. Now, Mr. Schmale said, those schools “could turn into mass spreaders.”

hit record highs in Gaza, which health experts attributed to the proliferation of the highly transmissible coronavirus variant first identified in Britain. In early May, Doctors Without Borders reported that the territory’s infections were topping 1,000 a day.

Sacha Bootsma, the W.H.O. official, said that before the vaccinations had stopped, 38,000 people in Gaza had received at least one dose of vaccine. That is less than 2 percent of the population of two million. Russia’s Sputnik vaccine and the Pfizer-BioNTech vaccine were given at three Gaza hospitals, and AstraZeneca’s vaccine was being administered at smaller health centers.

But now, Ms. Bootsma said, “People are not daring to visit health facilities. We are fearing this will have a major negative impact.”

By contrast, more than 60 percent of the Israeli population has received at least one dose of either the Pfizer-BioNTech or Moderna vaccines, and more than 55 percent are fully vaccinated, according to the Our World in Data project at the University of Oxford. However, the pace of vaccinations has slowed tremendously in recent months.

Under Covax, the international collaboration to provide vaccines to poor parts of the world, Gaza is supposed to receive enough vaccine to protect 20 percent of its population, the officials said.

But the deliveries, flown to Israel’s Ben Gurion Airport and then sent by land across the border to Gaza, have been indefinitely suspended because air service into Israel has been curtailed by the hostilities. Assuming they resume soon, it still remains unclear when Gaza’s border crossings might reopen.

“The biggest problem now is the borders are closed,” Mr. Schmale said. “Even if there were a delivery, we would not be able to receive any supplies.”

It’s a property that offers a unique open floor plan—plus a hot tub with a view.“It was a Methodist church located in a historic little area of St. … END_OF_DOCUMENT_TOKEN_TO_BE_REPLACED