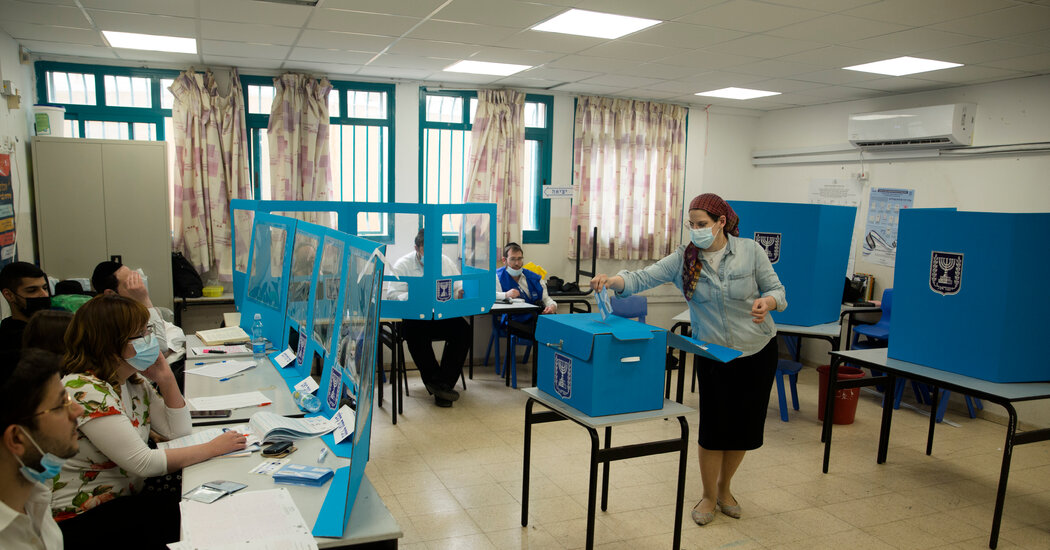 Israelis went to the polls on Tuesday for the fourth time in two years, hoping to end a political deadlock that has left the country without a national budget or stable government in the middle of a pandemic.

Prime Minister Benjamin Netanyahu is running for re-election despite standing trial on corruption charges, a decision that has divided the country and turned the election into a referendum on Mr. Netanyahu himself.

If re-elected, Mr. Netanyahu has promised to curb the power of the courts, setting the stage for a showdown between the judicial and executive branches of government that critics fear would cause a constitutional crisis. His opponents believe he wants to change the law to give himself immunity in his court case, a charge he denies.

While pre-election polls suggest that Mr. Netanyahu’s right-wing party, Likud, will emerge as the largest in the next Parliament, it is unclear whether his wider alliance of conservative, ultra-Orthodox Jewish and ultranationalist parties will win enough seats to form a parliamentary majority.

If no party can assemble a majority, the current impasse will continue and Israel could face a fifth election in a few months.

Mr. Netanyahu’s critics are counting on an ideologically incoherent array of opposition parties winning enough seats to form a majority — and then putting aside their political differences to create a functional coalition.

Even if they win enough seats, it will be tricky for them to unite. Parties opposed to Mr. Netanyahu include right-wingers, leftists and those representing Israel’s Arab minority.

The leading opposition candidate is a centrist former finance minister, Yair Lapid. To topple Mr. Netanyahu, he would need the support of Gideon Saar, a former Likud interior minister who shares many of Mr. Netanyahu’s political beliefs and who broke with the prime minister last year after Mr. Netanyahu refused to step down while on trial.

Mr. Lapid’s fate is also complicated by Naftali Bennett, another right-winger who has not ruled out working with Mr. Netanyahu’s critics but says he won’t back Mr. Lapid for prime minister. And both Mr. Bennett and Mr. Saar could balk at forming a coalition with a pair of Arab parties whose support would be crucial in forcing Mr. Netanyahu from office.

Mr. Netanyahu centered his campaign on his world-leading vaccine rollout, which has given a majority of Israelis at least one vaccine dose.

But his coronavirus record also makes him vulnerable. Mr. Netanyahu has often been accused of politicizing pandemic policymaking, not least when he soft-pedaled raising the fines given to violators of lockdown restrictions. That was interpreted as a friendly gesture to ultra-Orthodox Israelis, who were responsible for a high rate of lockdown violations. Their political parties are integral to Mr. Netanyahu’s efforts to form a coalition after the election.

Critics also accused him of having sabotaged budget negotiations at the height of the pandemic in November. That action — for which he blames his coalition partners — collapsed his coalition government and triggered today’s elections.

MIAMI--(BUSINESS WIRE)--Intelli Smart Homes, the leading smart home technology company, has been recognized as one of America’s fastest-growing … END_OF_DOCUMENT_TOKEN_TO_BE_REPLACED

Customers outside a Walmart store in Torrance, California, US, on Sunday, May 15, 2022. Walmart Inc. is scheduled to release earnings figures on May … END_OF_DOCUMENT_TOKEN_TO_BE_REPLACED

The past few years have been brutal on homebuyers' budgets. Would-be buyers have been priced out of some of the most desirable neighborhoods thanks to … END_OF_DOCUMENT_TOKEN_TO_BE_REPLACED