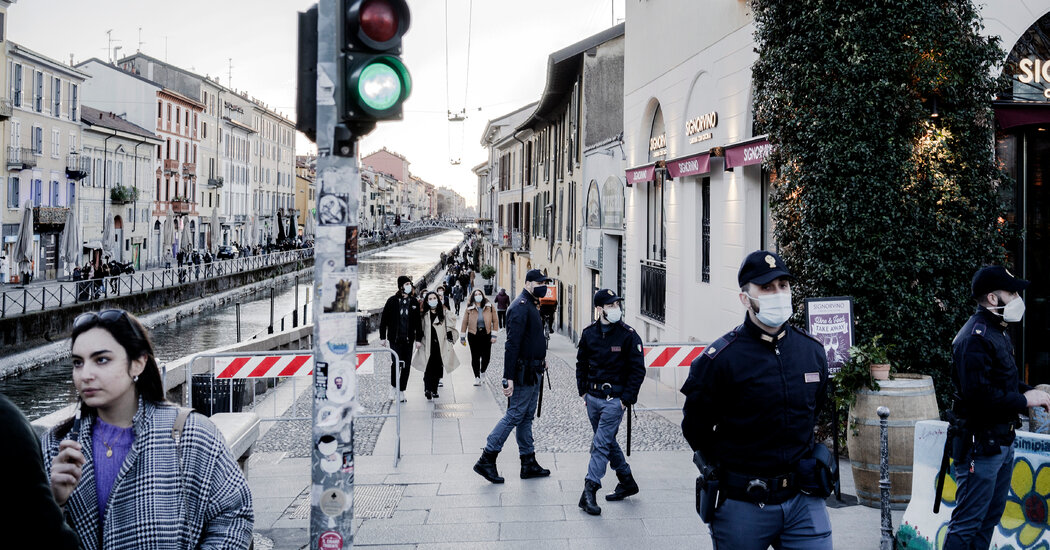 Italians enjoyed the last weekend outdoors before three-quarters of the population entered into a strict lockdown on Monday, when the government puts in place restrictive measures to fight the rise in coronavirus infections.

A more contagious variant first identified in the United Kingdom, combined with a slow vaccine rollout, led to a 15 percent increase in cases in Italy last week, a worrisome picture for the government run by Prime Minister Mario Draghi.

“I am aware that today’s measures will have an impact on children’s education, on the economy but also on the psychological state of us all,” Mr. Draghi said on Friday. “But they are necessary to avoid a worsening that will make inevitable even more stringent measures.”

Most regions in northern Italy, as well as Lazio and Marche in central Italy and Campania and Puglia in the south, will shut schools and forbid residents from leaving their homes except for work, health or necessity. Among business activities, only supermarkets, pharmacies and a few other stores will stay open, but restaurants will be shut.

In the rest of the country, residents will not be allowed to leave their municipality without reason involving work, health or other necessities, but schools and many stores will stay open.

“We believe that only with widespread vaccinations will we be able to avoid measures like these,” Mr. Draghi added.

Fewer than two million people in the country have been fully vaccinated so far, partly because of late deliveries from the pharmaceutical industries, but also because of logistical problems in some regions. Italy is one of the hardest-hit countries in the world: More than 100,000 people have died of Covid there, and 3.2 million have been infected.

Last Saturday, the government said it aimed to vaccinate at least 80 percent of the population by September. The plan, designed by an army general picked by Mr. Draghi for his expertise in logistics, envisioned administering up to 500,000 doses a day and also hiring junior doctors and dentists to give the injections in a plethora of facilities, such as military barracks, production sites, schools and gyms.

In a cabinet document, the government wrote that it expected to see its vaccination capacity increased in coming months. Deliveries are expected to rise from 15.7 million doses in the first quarter to 52.5 by June, and peak to almost 85 million in the third quarter. After canceling or limiting supplies for weeks, Pfizer-BioNTech should increase deliveries in the near future, while AstraZeneca is still planning a slower rollout of vaccines to Italy. The Piedmont region, however, suspended use of the AstraZeneca vaccine, a precautionary measure while investigations of a possible link to health problems are underway.

The entire country will be on lockdown for the Easter weekend, April 3-5, to prevent the usual large family reunions. As with last Christmas’s restrictions, people will still be allowed to leave their homes once a day.

Chief Covelli said Mr. Crimo planned the shooting for several weeks, but that the authorities had not yet established what his motive was. “We have no … END_OF_DOCUMENT_TOKEN_TO_BE_REPLACED

Kevin McKenzie and Martine van Hamel were standing in the dining room of their weekend house in Woodstock, N.Y., trying to figure out when they got … END_OF_DOCUMENT_TOKEN_TO_BE_REPLACED