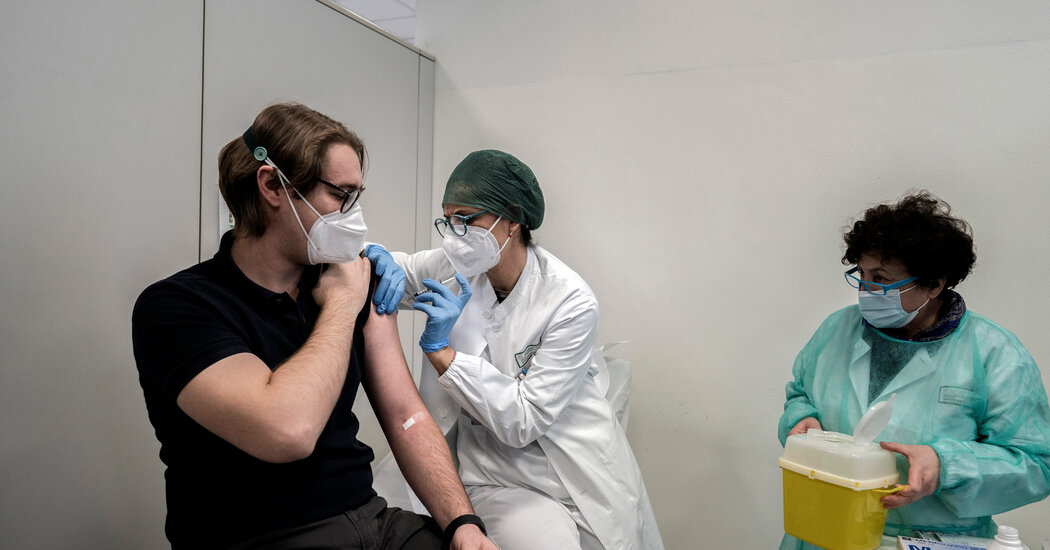 ROME — Giulio Macciò tested negative for the coronavirus and spent weeks receiving treatment for emphysema in a sealed-off hospital under the care of doctors and lung specialists — and a nurse who had refused to be vaccinated. On March 11, he unexpectedly died. A post-mortem swab found that he had contracted the virus, as had 14 other patients and the unvaccinated nurse who spent her shifts in his midst.

“It makes no sense that a person whose job is to heal the sick gives them Covid and kills them,” said Mr. Macciò’s son, Massimiliano Macciò, who filed a complaint against the San Martino hospital in the northern Italian city of Genoa. He believes that the nurse, one of an estimated 400 who have refused vaccination against Covid-19 at the hospital, infected his father, who died unvaccinated at 79.

As vaccination rollouts build momentum, businesses everywhere are grappling with whether they can require the inoculation of their employees, raising thorny ethical, constitutional and privacy issues around Europe and the United States. But that quandary becomes all the more urgent when the person is your health care worker.

In Italy, the original Western front in the war against Covid, a rash of outbreaks in hospitals where medical workers have chosen not to be inoculated has raised fears that their stance is endangering public health. It has also prompted a forceful response from an Italian government that is struggling to get vaccinations on track.

pronouncement by Italy’s data protection authority that the vaccination status of health workers should be unknown. “But this right exists until it does not limit another person’s right,” Mr. Petralia said.

made some vaccinations compulsory for children, including for measles, and barred the unvaccinated from attending school — a decision backed by Italy’s constitutional court because it also safeguarded public health. In the northern city of Belluno, a court ruled in mid-March that a nursing home that employed several health care workers who chose not to get vaccinated could force them to take paid leave.

Mr. Macciò, whose father died in Genoa, said it made no sense that the people entrusted to care for his father were allowed to potentially harm him. He said he had complained to the doctors, who told him their hands were tied because the nurses were protected by privacy rules.

But amid Italy’s frustration, and the new decree, something appears to be changing. Mr. Macciò said the police had asked for his help in identifying the nurses he saw when going to pick up his father’s belongings.

“I hope some good comes of it,” he said of his father’s death. “These people should change their job.”

GREENVILLE, N.C.--(BUSINESS WIRE)--Employers aiming to win the war on talent have a new “A” team to tap into: college and professional athletes. … END_OF_DOCUMENT_TOKEN_TO_BE_REPLACED

Mortgage rates are likely to rise in July, extending a seven-month streak. High inflation, and the Federal Reserve's efforts to control it, have … END_OF_DOCUMENT_TOKEN_TO_BE_REPLACED