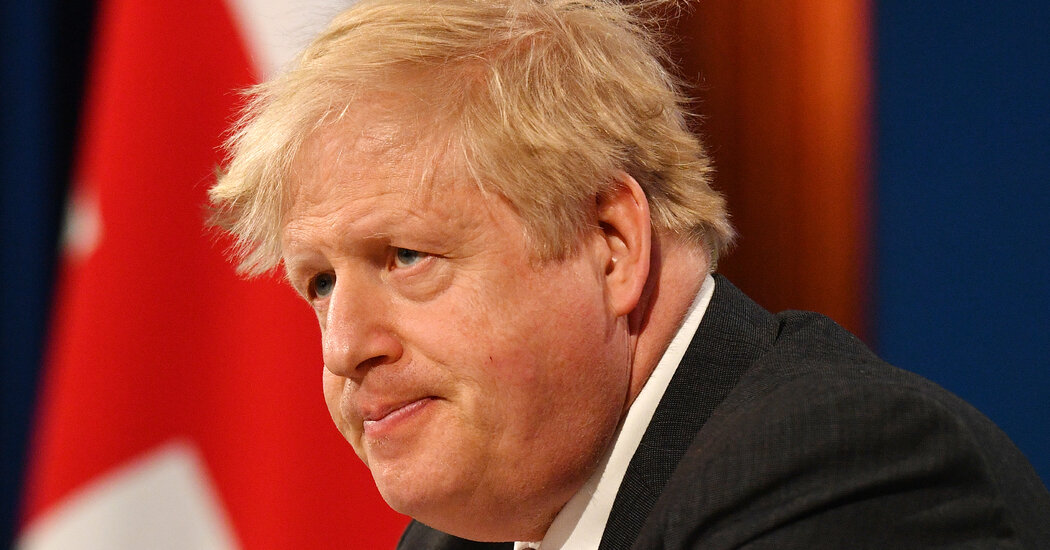 LONDON — Still riding high from Britain’s successful vaccine rollout and a politically shrewd campaign to kill off a proposed European soccer super league, Prime Minister Boris Johnson now confronts thorny questions about how he and other senior officials have dealt with efforts to lobby the government.

For a politician who gleefully defies convention and rarely plays by the rules, it amounts to a return to normality.

The latest questions involve text messages that Mr. Johnson traded with a wealthy British businessman, James Dyson, over his plan to manufacture ventilators in the early days of the coronavirus pandemic. The story took a juicy turn on Friday after British papers reported that the messages were leaked by Mr. Johnson’s disgruntled former chief adviser, Dominic Cummings.

On Friday, Mr. Cummings fired back, writing on his personal blog that he did not have the text messages that were leaked, though he did have copies of other texts between Mr. Johnson and Mr. Dyson. He also claimed that Downing Street falsely accused him of leaking details about a decision to impose a lockdown last fall.

Greensill Capital, that was seeking loans from the British government.

The government rebuffed the requests, but Mr. Cameron’s level of access — and the fact that he did not break any laws — alarmed critics, who said it revealed the inadequacy of the rules governing lobbying by former officials. The same is true, they said, of the code of conduct for the prime minister and his cabinet members.

“It’s a paper tiger system,” said Jill Rutter, a former civil servant who is now a senior research fellow at the U.K. in a Changing Europe, a think tank based in London. “If anyone wants to push it, it falls over in a heap.”

The guidelines on civil servants, she said, needed to be updated as the government has recruited more people with business skills, who tend to rotate in an out of government jobs. The Ministerial Code, which sets out standards of conduct, is a toothless document that says nothing about lobbying, she said, and can be rewritten or discarded by the prime minister.

Some analysts drew a distinction between the Greensill affair and Mr. Johnson’s texts with Mr. Dyson. The government had pressed his company, which is based in Singapore and is known for its high-end vacuums, to produce ventilators to avert a shortfall in hospitals overrun with Covid patients. Mr. Dyson agreed, at some cost to the company, but wanted to make sure that employees who moved to Britain to carry out the job would not be penalized by the tax laws.

“Dyson was reasonable in asking that his team not be disadvantaged by doing that in the emergency,” said Bronwen Maddox, director of the Institute for Government, a think tank in London. “What is questionable is the ease of access to the P.M. it revealed, and how he has declined to follow the normal practice of changing phones in office.”

Holding on to his cellphone — and using it to send WhatsApp messages to a pro-Brexit businessman — is hardly the only way Mr. Johnson has flouted convention. After his election victory in 2019, he and his girlfriend, Carrie Symonds, vacationed on the chic Caribbean island of Mustique. Mr. Johnson claimed another wealthy businessman picked up the tab of £15,000 ($20,785), which the businessman denied.

The opposition Labour Party has seized on the allegations of cronyism to paint a portrait of a Conservative government awash in corruption. The Labour leader, Keir Starmer, hammered Mr. Johnson in Parliament for what his party considers a pattern of dubious behavior, including handing out lucrative contracts for protective medical equipment to well-connected firms.

How much these scandals will hurt Mr. Johnson is another question. By now, analysts said, his peccadilloes are so well established that little will change public views of him. The Conservative Party has widened its lead over Labour in recent polls, as the government has reaped credit for the vaccine rollout. And Mr. Johnson’s opposition to the soccer Super League burnished his populist credentials.

But Professor Bale said that as the disclosures accumulate, they can have a “snowball effect.” Prime Minister John Major, Mr. Johnson’s 1990s forebear, enjoyed a reputation as an honest politician. A string of scandals involving members of his government and the Conservative Party eventually ravaged that reputation.

The changing political environment may have played a role in Downing Street’s decision to abandon a plan to hold White House-style televised briefings. Mr. Johnson’s aides had billed the briefings as proof of the government’s transparency and spent £2.6 million ($3.5 million) to build a wood-paneled briefing room.

But earlier this week, the sessions were quietly shelved. Allegra Stratton, the press secretary hired to go before the cameras, was reassigned to be the spokeswoman for the United Nations’ climate change conference, which Britain is hosting in Glasgow in November. Officials said Mr. Johnson would still use the briefing room for his own encounters with the press.

If his most recent news conference is any indication, those may become scratchier. On Monday, a reporter asked Mr. Johnson whether he had acted with “honesty and integrity” in his relationship with Jennifer Arcuri, an American woman who claims to have had an affair with Mr. Johnson when he was mayor of London.

Alastair Campbell, who served as press secretary to Prime Minister Tony Blair, said the political dynamic had changed since Mr. Johnson’s aides conceived the idea of televised briefings last fall. Then, during the depths of the pandemic, press criticism of the government was restrained by the sense of national crisis.

“Its arrival has coincided with a time when, finally, a few journalists are starting to show a little more robustness,” Mr. Campbell said. “The Cameron-Greensill story has unleashed untapped concern at the nature of the governing party.”

Three men were indicted in the death of the notorious gangster James (Whitey) Bulger, who was beaten to death four years ago in a West Virginia … END_OF_DOCUMENT_TOKEN_TO_BE_REPLACED

Dr. Connolly and Dr. Mott live in the North Baltimore neighborhood of Homeland, known for its strong public schools and colonial architecture, which … END_OF_DOCUMENT_TOKEN_TO_BE_REPLACED