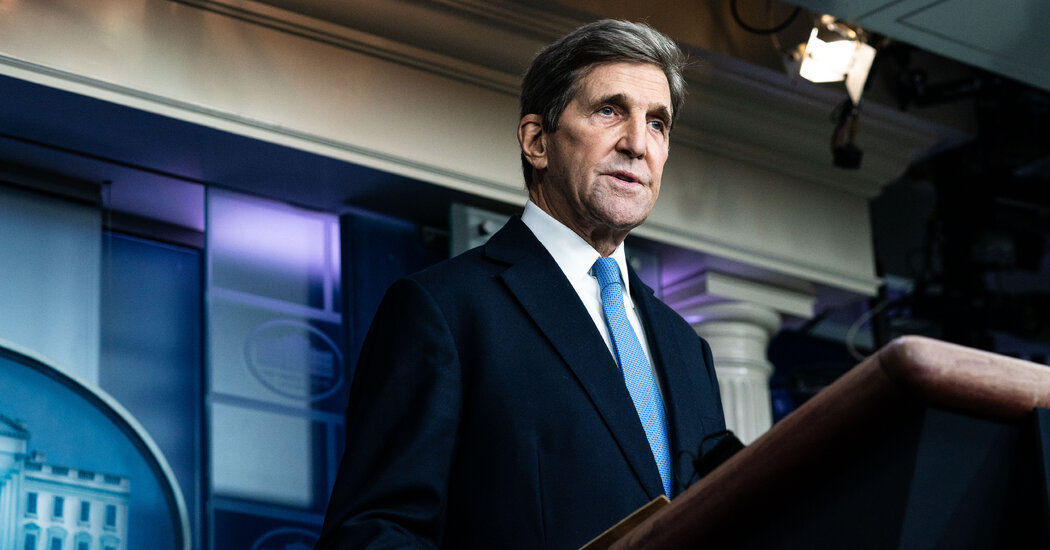 President Biden’s climate envoy, John Kerry, was set to arrive in China on Wednesday, the first Biden administration official to visit the country at a moment of high diplomatic tensions.

In its formal announcement of the trip, the State Department said that Mr. Kerry would “discuss raising global climate ambition” ahead of a virtual climate summit that President Biden plans to host for dozens of world leaders later this month. The summit’s goal is to prod countries to do more to reduce carbon emissions and limit planetary warming by 1.5 degrees Celsius, a threshold scientists argue is needed to avert catastrophic changes to life on the planet.

President Biden has invited China’s leader, Xi Jinping, to the summit, but Mr. Xi has not yet accepted the invitation. His participation in an American diplomatic initiative, were it to happen, would be a significant sign of China’s willingness to work with the United States despite rising tensions over sanctions and other measures the new administration has taken in coordination with its allies.

Mr. Kerry’s visit to China underscores the Biden administration’s intent to cooperate with China on shared challenges, including climate, the coronavirus and nuclear proliferation even as the countries are locked in an increasingly fraught political, technological and military competition.

Hong Kong and Xinjiang, and its military operations near Taiwan and in the South China Sea.

In a move likely to anger Beijing, the State Department also announced on Tuesday that a delegation of former American officials, including two former deputy secretaries of state, would visit Taiwan as a “personal signal” of Mr. Biden’s commitment to the island democracy, which Beijing claims as part of its territory. Chinese officials have sharply criticized the administration’s signals of support for Taiwan.

Mr. Biden has made clear that he sees China as a leading strategic threat to America. At a testy diplomatic summit in Anchorage last month, senior Chinese and American officials traded sharply critical assessments of each other’s policies.

The visit by Mr. Kerry comes after the release of a major annual intelligence report on Tuesday that warned China’s effort to expand its growing influence represents one of the largest threats to the United States. China’s strategy, according to the report, is to drive wedges between the United States and its allies. The report also identified climate change as a growing threat to the United States.

specific new targets for reducing emissions. He pledged last year to speed up the point when emissions peak in China, which had previously been in 2030, and to reach “carbon neutrality” by 2060 — meaning that the country would emit no more emissions than it takes from the atmosphere by planting forests or engineering.

Environmentalists cheered those goals, but later expressed disappointment that the Chinese government did not detail how to reach them when they unveiled a new five-year economic plan in March.

At the same time, China has continued to approve new coal plants, one of the leading sources of carbon emissions, prioritizing social stability and economic development of an important industry at home.

Thom Woodroofe, an analyst at the Asia Society Policy Institute who is studying Chinese-American climate cooperation, said at a talk last month that both countries seemed to want to insulate the issue of climate change from their other disputes.

“From China’s perspective, there’s a recognition that they have more to gain than lose from finding a way to cooperate with the United States on climate,” he said.

While President Trump was in the White House, China raised its profile as a leading player in climate change policy. “With Biden’s inauguration, they don’t simply want that position to be swept aside,” he said.

AUSTIN, Texas--(BUSINESS WIRE)--As the first multifamily management company to be recognized in the Public Relations and Marketing Excellence Awards, … END_OF_DOCUMENT_TOKEN_TO_BE_REPLACED

There have been whispers of cooling housing and rental prices in the San Francisco Bay Area, but that hasn't yet translated into practical, noticeable … END_OF_DOCUMENT_TOKEN_TO_BE_REPLACED

Cars pass in Independence Square at twilight in Kyiv, Ukraine, Monday, Oct. 31, 2022. Rolling ... [+] blackouts are increasing across Ukraine as the … END_OF_DOCUMENT_TOKEN_TO_BE_REPLACED