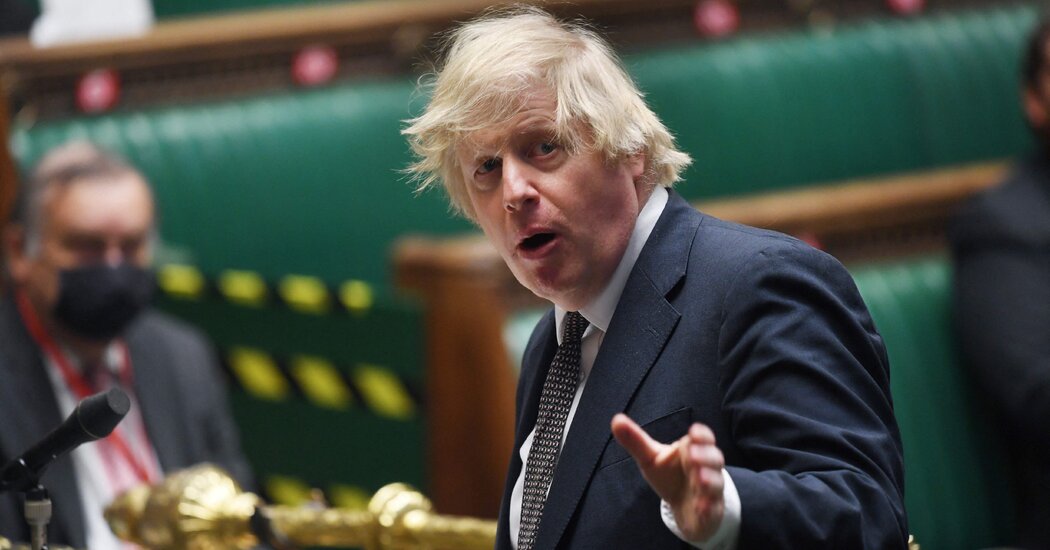 Pro-Brexit politicians and commentators are casting Britain’s vaccine deployment, which ranks among the fastest in the world, as an example of risk-taking and entrepreneurial pluck that comes from not being shackled to the collective decision-making of the 27 member states of the European Union.

With vaccination rates that are a fraction of Britain’s, threats of export bans on vaccines produced on the continent and churlish statements about British-made vaccines by leaders like President Emmanuel Macron of France, the European Union has seemingly done all it can to make it look like Britain picked the right time to leave.

“It is the first serious test that the U.K. state has faced since Brexit,” said Matthew Goodwin, a professor of politics at the University of Kent who studies the British right. “Boris Johnson is going to have a vaccine dividend, and that will give him a whole new narrative for the summer and beyond.”

the costs of Brexit since Britain severed itself from the European Union in January — damaging disruptions to cross-channel trade and businesses choking on reams of red tape, among other headaches. And it conveniently ignores the harrowing experience many Britons had with the virus before the first vaccine “jabs” arrived last December.

according to a new survey conducted by Ipsos MORI for the E.U.-U.K. Forum, an organization that promotes cross-Channel dialogue. Only 12 percent said they thought Britain had performed worse while 14 percent thought both had handled things equally well.

For all its early stumbles, said Kelly Beaver, managing director of Public Affairs at Ipsos MORI, “the British public feel that overall, the government has done well compared to its E.U. counterparts, no doubt a halo effect of the vaccination program that has, to date, been incredibly successful.”

Significantly, a slight plurality of those surveyed — 40 percent — said they thought Brexit had helped improve Britain’s handling of the pandemic, while 14 percent said it had made it worse, and 38 percent thought it had made no difference.

Overall, the survey shows that the strength of feeling over Brexit has faded somewhat although a majority expect it to increase food prices and make European vacations more difficult. And Britons remain sharply divided, not just over E.U. membership but also on other issues like crime, British values and political correctness.

Mr. Johnson’s vaccine bounce, analysts point out, could be fleeting if a new variant emerges or if the economy does not recover swiftly.

But Mr. Goodwin said one consequence of the vaccine success is that there are few signs of significant numbers of people rethinking the wisdom of Brexit or suffering the acute regret — or as he called it, “Bregret” — that some expected.

The British media has understandably given more coverage to the 28 million people who have been inoculated than to the post-Brexit trade disruptions that have afflicted some British food and seafood exports and left supermarket shelves in Northern Ireland empty.

The monthslong shutdown of much of Britain’s economy will also complicate the task of identifying the negative effects of Brexit, since they are likely to be lost in a sea of red ink. And long before the pandemic, economists predicted that Brexit’s biggest cost would be to dampen economic expansion, an effect that would compound almost imperceptibly over many years, rather than create a sudden shock.

In any event, the vaccine rollout has helped the government to hone a separate and distinct argument for Brexit, one that emphasizes responsibility and accountability over economic costs or benefits.

David Frost, a former diplomat who negotiated the Brexit trade agreement for Mr. Johnson and is now a cabinet minister, articulated this case earlier this month when he said Britain’s membership in the European Union had stifled its initiative, producing “a kind of institutional paralysis.”

Britain faced problems “which we seemed to find very difficult to summon up the will to resolve, and I do think E.U membership had a kind sapping quality to our ability to take decisions,” he said at the Policy Exchange, a research institute.

“Brexit doesn’t solve those problems,” Mr. Frost added, “but it does give us means to solve them, to move on, to get a grip but also to reform our attitudes and become a country that can deal with problems again.”

Britain, officials point out, made risky bets on multiple vaccine candidates and aggressively locked up supplies in advance — characteristics, they say, that were conspicuously lacking in the European Union’s plodding, lockstep, risk-averse approach.

But critics argue that Britain could have done much of what it did as an active member of the European Union. The British medical regulator always had the right to approve vaccines, on an emergency basis, faster than the rest of the bloc — as it did last December — and the government always had the freedom to buy doses separately from the bloc, as some other E.U. countries have since done.

The strengths of Britain’s rollout, these critics said, are rooted in its robust scientific establishment, which developed the AstraZeneca-University of Oxford vaccine, and its widely revered National Health Service, which has delivered the doses. Neither of those were strengthened by leaving the European Union.

Britain cut its own deal with AstraZeneca, an Anglo-Swedish company, which is at the heart of its clash with the European Union, which was slower to make such purchases. Brussels has accused the company of giving Britain preferential treatment at the expense of the bloc.

European leaders will be weighing a plan this week to halt vaccine exports temporarily as a way to demand reciprocity with Britain and other countries, and that could leave Britain — and Mr. Johnson — badly exposed. The country relies heavily on vaccines manufactured in factories in Belgium and other European countries to keep the pace of its inoculations going.

“What Brexit changes is Britain’s ability to protect the overseas parts of its supply chains,” said Mark Malloch Brown, a diplomat and former Labour government minister who chaired an anti-Brexit group, Best for Britain. “The crisis, looked at from the other end, exposes Britain’s vulnerability.”

Britain’s reliance on the European Union goes beyond a steady supply of vaccines. It is by far Britain’s largest trading partner, and the two sides have close links in security and law enforcement. While Mr. Johnson himself has avoided using overtly provocative language against Brussels, he has overseen a rapid deterioration in relations since Britain officially cast off on Jan. 1.

“I’m worried that they’re getting so carried away by the evidence that Brexit was a good thing, that they’re going to carry on dissing Europe,” said Jonathan Powell, who served as chief of staff to Prime Minister Tony Blair. “Then the next time we need them for something, it’s going to backfire on us.”

SAN FRANCISCO — Cleve Jones has lived in the Castro neighborhood for nearly 50 years, almost from the day he graduated from high school in Phoenix and … END_OF_DOCUMENT_TOKEN_TO_BE_REPLACED

A home inspection can spare you from unpleasant surprises after you buy. After crunching the numbers, searching your favorite neighborhoods, and … END_OF_DOCUMENT_TOKEN_TO_BE_REPLACED