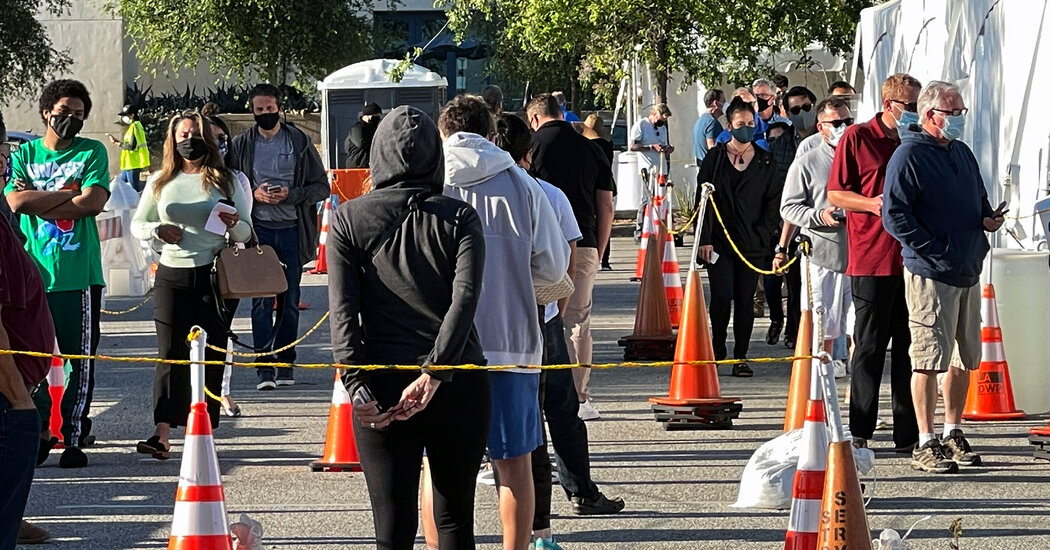 Federal officials have said they still expect enough supply from the two other authorized vaccine manufacturers to be able to fulfill President Biden’s promise of having enough doses for all adults in the country by the end of May.

Nonetheless, states were counting on the Johnson & Johnson vaccine to fill important gaps in vaccination campaigns. Easier to store and transport — the vaccine can be kept at normal refrigeration temperatures for three months — states had begun using it in transformative ways, on homeless populations, migrant workers and college students.

Federal administrators divide vaccine doses nationwide based on each state’s adult population. That means that California will bear the brunt of the reduction: After receiving 572,700 doses of the Johnson & Johnson vaccine this week, it will get only 67,600 next week, according to Centers for Disease Control and Prevention data.

In Michigan, Gov. Gretchen Whitmer said Friday that she had urged President Biden to surge Covid-19 vaccines into her state, where a worst-in-the-nation outbreak has filled hospitals and forced some schools to close. “At this point that’s not being deployed, but I am not giving up,” Ms. Whitmer said, describing a Thursday evening call with the president. “Today it’s Michigan and the Midwest. Tomorrow it could be another section of our country.”

Ms. Whitmer, a Democrat whom the president considered as a potential running mate, took pains to praise aspects of Mr. Biden’s coronavirus response at a Friday news conference. But Ms. Whitmer said a rapid influx of shots, particularly the Johnson & Johnson vaccine, was essential to tamping down case numbers even as she resisted additional restrictions on gatherings and businesses.

Jeff Zients, the White House Covid coordinator, said at a news briefing on Friday that the administration does not plan to shift additional vaccine doses to hard-hit states like Michigan, which is slated to get another 17,500 Johnson & Johnson doses next week, an 88 percent drop compared to the nearly 148,000 doses it received this week, according to C.D.C. data.

AUSTIN, Texas--(BUSINESS WIRE)--As the first multifamily management company to be recognized in the Public Relations and Marketing Excellence Awards, … END_OF_DOCUMENT_TOKEN_TO_BE_REPLACED

There have been whispers of cooling housing and rental prices in the San Francisco Bay Area, but that hasn't yet translated into practical, noticeable … END_OF_DOCUMENT_TOKEN_TO_BE_REPLACED

Cars pass in Independence Square at twilight in Kyiv, Ukraine, Monday, Oct. 31, 2022. Rolling ... [+] blackouts are increasing across Ukraine as the … END_OF_DOCUMENT_TOKEN_TO_BE_REPLACED