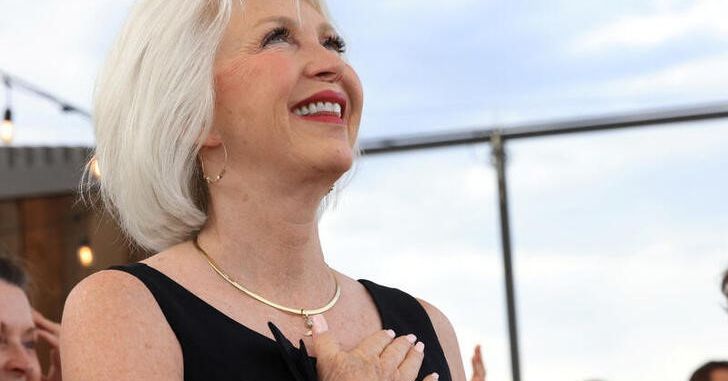 DENVER, July 15 (Reuters) – A Colorado judge on Friday nixed an arrest warrant for a county clerk who was indicted on felony charges of tampering with voting equipment and then lost a bid for the Republican nomination to Colorado’s top election-management post.

Mesa County District Judge Matthew Barrett said he was giving Tina Peters a break because her lawyer took responsibility for not relaying to his client an order barring her from traveling out of state without the court’s approval. The ban was part of the terms of her bail bond that permitted her pre-trial release from jail in March.

But Barrett warned Peters, who flew to Las Vegas this week to speak at a symposium of conservative law enforcement officers, during the 45-minute hearing that he would not be so lenient should it happen again.

“She is a flight risk,” Barrett said. “She has resources and access to private jets.”

In March, Peters was indicted by a Colorado grand jury on election tampering charges stemming from an alleged breach of Mesa County’s voting equipment. She has been barred by Colorado’s secretary of state from overseeing elections in the western Colorado county this year.

The case gained national attention in part because Peters was outspoken in her support for former President Donald Trump’s baseless claims that the 2020 presidential election was rigged against him.

Peters has denied any wrongdoing and blamed her legal troubles on her political adversaries, including Colorado Secretary of State Jena Griswold, a Democrat.

Undaunted by her indictment, Peters sought the Republican nomination to challenge Griswold, who is up for re-election in November. But Peters, who was permitted to travel outside Colorado while she was a candidate for statewide office, lost the Republican primary last month.

Peters is due back in court on Aug. 5.

Reporting by Keith Coffman in Denver; Editing by Alexandra Ulmer and Leslie Adler

There were no arrests in three quarters of last year’s fatal shootings, according to statistics provided by Mr. Krasner’s office, even as arrests for … END_OF_DOCUMENT_TOKEN_TO_BE_REPLACED