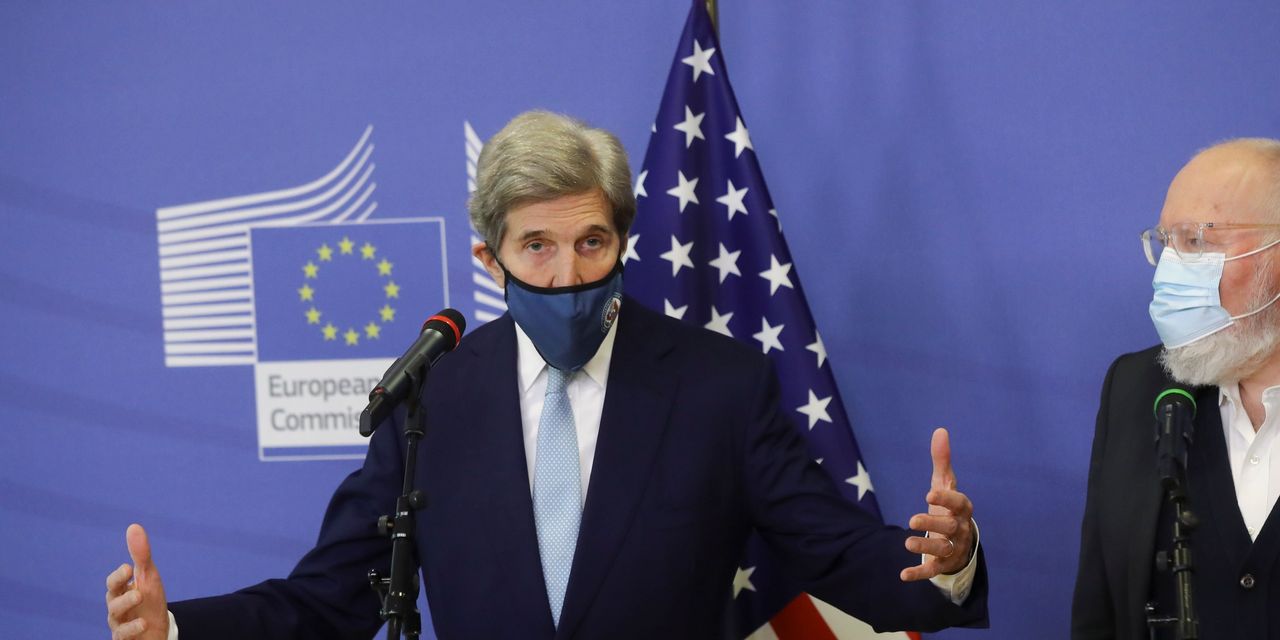 Mr. Kerry, making one of the first international trips by a senior member of the Biden administration, is meeting with leaders this week in London, Brussels and Paris, following the U.S. return to the Paris climate accord. On his agenda are efforts to coordinate with Europeans for a planned Earth Day environmental summit Mr. Biden is hosting next month and the United Nations COP26 environmental summit in Glasgow, Scotland, in November.

“This is the rekindling of a partnership that helped to make Paris happen, and we’re going to work hard to make Glasgow a success,” Mr. Kerry said in a meeting with European Union Executive Vice President Frans Timmermans. “Our leadership, we hope, will be critical in bringing other significant emitting nations to the table.”

Mr. Biden has made tackling climate change one of his top priorities, signing an executive order returning the U.S. to the 2015 agreement hours after taking office. The U.S. officially rejoined on Feb. 19.

Former President Donald Trump had exited from the accord in 2017, saying it put the U.S. at a competitive disadvantage through increased regulations and burdens on American companies. The response to climate change was one of many areas of tension between Mr. Trump and his European counterparts.

Mr. Biden’s position on the environment and Mr. Kerry’s visit have been broadly welcomed in Brussels. “It’s no longer a lonely place to be a European promoting climate neutrality,” said Mr. Timmermans. “I don’t think we should underestimate the dynamic this creates in the international field.”

Both men acknowledged opposition in many places to policies addressing climate change, such as reducing use of fossil fuels, and that many countries can’t afford to pay for transitioning to low-emissions technologies. Mr. Kerry said that supporting such countries with financial help “is going to be a big part of Glasgow.”

Mr. Kerry also acknowledged that many in the U.S. are skeptical about the existence of climate change or opposed to government spending in the field, and that Mr. Biden has a slim majority in Congress to advance his agenda. But Mr. Kerry said those facts are less significant now because businesses are actively working to reduce emissions and develop new technologies.

In a sign of that shift, Europe on Wednesday introduced new rules requiring financial firms to disclose how products they claim to be socially responsible meet that standard. Mr. Kerry noted that senior administration officials have advocated new U.S. environmental, social and governance financial-disclosure rules.

“If two of the world’s strongest markets are joining together to move in this direction, we think that can have a profound impact,” Mr. Kerry said.

The environment is also an area where the U.S. and Europe can work with China, despite rivalries and tensions in other fields, both men said.

“Of course, we have some disputes with China in other areas,” said Mr. Timmermans, noting that China’s involvement and support was crucial to agreement on the Paris accord. “China is not going to do this to do us a favor. China is going to do this because it’s in the interest of China.”

Write to Daniel Michaels at daniel.michaels@wsj.com

As the weather warms up and the first flowers bloom, home buyers start perking up, too. Spring is traditionally the start of the busiest home-buying … END_OF_DOCUMENT_TOKEN_TO_BE_REPLACED

The apparent problem with Johnson & Johnson’s Covid-19 vaccine is both serious and rare, which makes it a thorny issue for policymakers to address … END_OF_DOCUMENT_TOKEN_TO_BE_REPLACED

LONDON — “Your local pub, it’s a bit like your favorite pair of shoes or jeans, something you just completely take for granted,” Rob Cope said, … END_OF_DOCUMENT_TOKEN_TO_BE_REPLACED