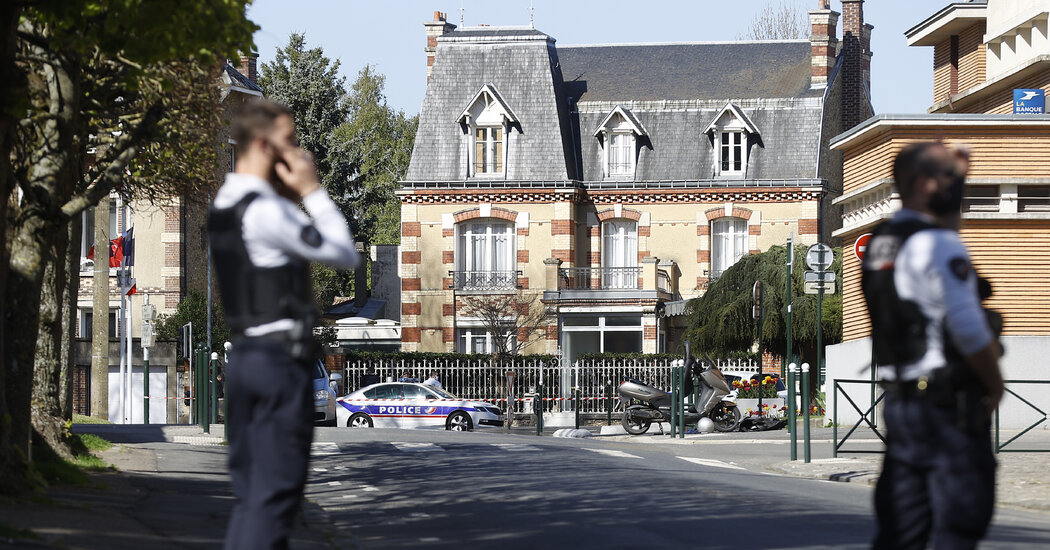 PARIS — Jamel Gorchene, the Tunisian man who killed a police officer Friday in a terrorist attack that has stirred a political storm in France, had watched videos “glorifying martyrs and jihad immediately before he acted,” the top French antiterrorism prosecutor said Sunday.

Speaking at a news conference, the prosecutor, Jean-François Ricard, portrayed Mr. Gorchene as an immigrant with a “troubled personality” whose radicalization went unnoticed by the French intelligence services before he stabbed the police officer in the neck and abdomen at her station.

“According to two witnesses, the aggressor went back and forth in front of the building before he struck,” Mr. Ricard said. “And he cried ‘Allahu akbar’” — God is great, in Arabic — “as he stabbed the victim.” Officials identified the dead 49-year-old police officer by her first name, Stéphanie.

The killing took place in the affluent town of Rambouillet, southwest of Paris, far from the troubled projects circling big French cities where many Muslim immigrants, mainly from North Africa, live. The misery in these areas and the failure of integration they represent have been viewed as one source of the Islamist terrorism that has been a recurrent scourge in France, leaving more than 200 people dead in 2015 and 2016 alone.

Mohamed Lahouaiej Bouhlel, the delivery-truck driver who in 2016 plowed a 19-ton refrigeration vehicle into a crowd on the Promenade des Anglais in Nice, killing 86 people. In that case, too, the attacker was not on a French government database of radicalized militants.

security into a central issue of next year’s presidential election. A poll published Sunday by the newspaper Journal du Dimanche paper indicated that 72 percent of French people regard the issue as a priority, below health care but above unemployment and fighting poverty.

“Macron equals chaos,” said Marine Le Pen, the extreme right leader who appears to be in a tight race with the president, citing “the multiplication of terrorist attacks.”

Gérald Darmanin, the hard-line interior minister installed last year by Mr. Macron in an attempt to blunt Ms. Le Pen’s appeal, has led the government’s riposte, declaring in an interview in the Journal du Dimanche that “our hand is not trembling.” He said that at the request of Mr. Macron, he would present a new antiterrorism bill aimed at what he called “an evolving threat.”

The bill, in preparation before the most recent attack, would reinforce the technological means the government can use to track messages on social media.

Mr. Darmanin cited the fact that intelligence services had missed the contacts with Syria that the Chechen killer of a teacher last October had, because he was using Instagram’s messaging service. The teacher, Samuel Paty, was beheaded after showing caricatures of the Prophet Muhammad during a class on freedom of expression.

The period during which people convicted on terrorism charges could be subjected to various “administrative constraints” after leaving prison would be extended to two years from one, Mr. Darmanin said.

Asked if there was any danger of an infringement of civil liberties, Mr. Darmanin said, “Let’s stop with this kind of naïveté.”

There were no arrests in three quarters of last year’s fatal shootings, according to statistics provided by Mr. Krasner’s office, even as arrests for … END_OF_DOCUMENT_TOKEN_TO_BE_REPLACED