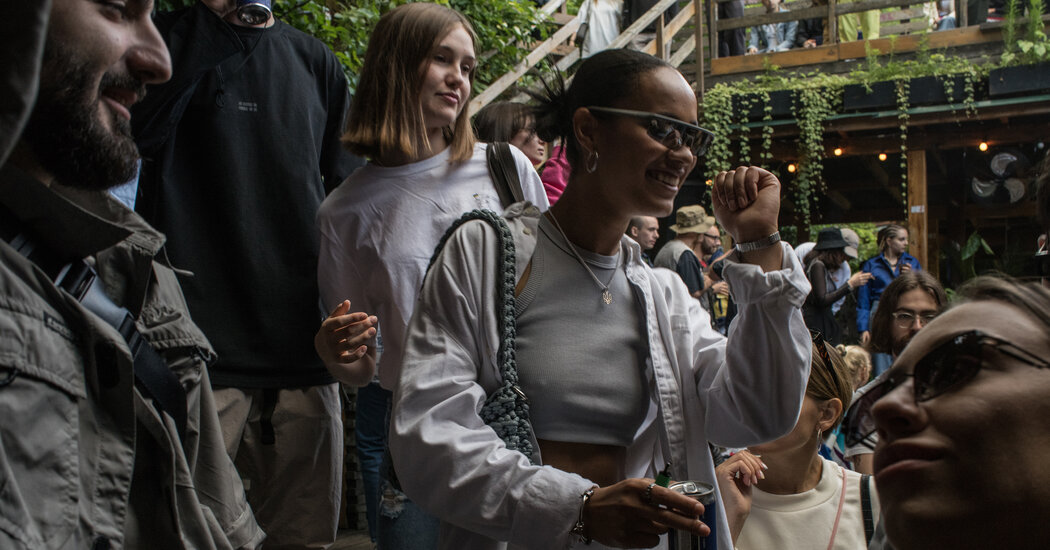 KYIV — The rave had been planned for weeks, with the space secured and the D.J.s, the drinks, the invites and the security all lined up.

But after a recent missile strike far from the front lines killed more than 25 people, including children, in central Ukraine, an attack that deeply unsettled all Ukraine, the rave organizers met to make a hard, last-minute decision. Should they postpone the party?

They decided: No way.

“That’s exactly what the Russians want,” said Dmytro Vasylkov, one of the organizers.

a city that already enjoyed a reputation for being cool, it gets easier to find a party. A hip-hop event the other night became a sea of bobbing heads. The party was held outdoors. For a spell, it started raining. But that didn’t matter. The party was on. On the dance floor, bodies were bumping.

Pink Freud, a bar, the war keeps coming up. Small talk between a young woman and Mr. Chehorka, the bartender, who also works as a psychotherapist, led to a conversation about hobbies that led to a discussion about books that led, inexorably, to the Russians.

Mr. Chehorka told the young woman that he was selling his large collection of Russian language books because he never wanted to read Russian again.

“This is my own war,” he explained.

He added that he felt the city’s whole psyche had changed. “Kyiv’s different now,” he said. “People are more polite, more friendly. They’re not drinking as hard.”

A yearning for close connection, for something meaningful amid a seismic, terrifying event that won’t end, is what brought two dozen people to a recent“cuddle” party.

Cuddle parties started before the war, but the people who came two Sundays ago — a mix of men and women from their early 20s to mid-60s — said they really needed them now.

The cuddlers gathered in a large, tent-like structure near the river, and as new age music played, they lied on floor cushions in a big warm heap. Some stroked their neighbor’s hair. Others clutched each other tightly, eyes closed, like it was the last embrace they’d ever share with anyone. After about 15 to 20 minutes, the heap stirred awake.

The cuddlers opened their eyes, untangled themselves, stood up and smoothed out their pants. The whole idea is to seek bodily comfort from curling up with a stranger. They found new cuddling partners and new positions.

This cuddling is another dimension of Kyiv’s party scene at the moment: Many social gatherings are specifically engineered to provide solace.

Maksym Yasnyi, a graphic designer, just held a 24-hour yoga party, which he said was “really cool” but it wasn’t like going out before the war.

“Before the war, Kyiv nightlife was sparkling with different colors,” he said. “You could spend the whole night going from party to party. If I allow myself to think about this, I’ll make myself really upset.”

Now, when it hits 10, Kyiv radiates a nervous energy. People drinking on the street, or out by the river, check their watches. They cap the clear plastic bottles of cider they were swigging, get up and walk quickly.

Uber prices triple, if you can find one.

Some young people, seeing the impossibility of hailing a ride, say bye to their friends and duck their heads and start running home, desperate to beat curfew.

At the stroke of 11, Kyiv stops. Nothing moves. The sidewalks lie empty.

There were no arrests in three quarters of last year’s fatal shootings, according to statistics provided by Mr. Krasner’s office, even as arrests for … END_OF_DOCUMENT_TOKEN_TO_BE_REPLACED