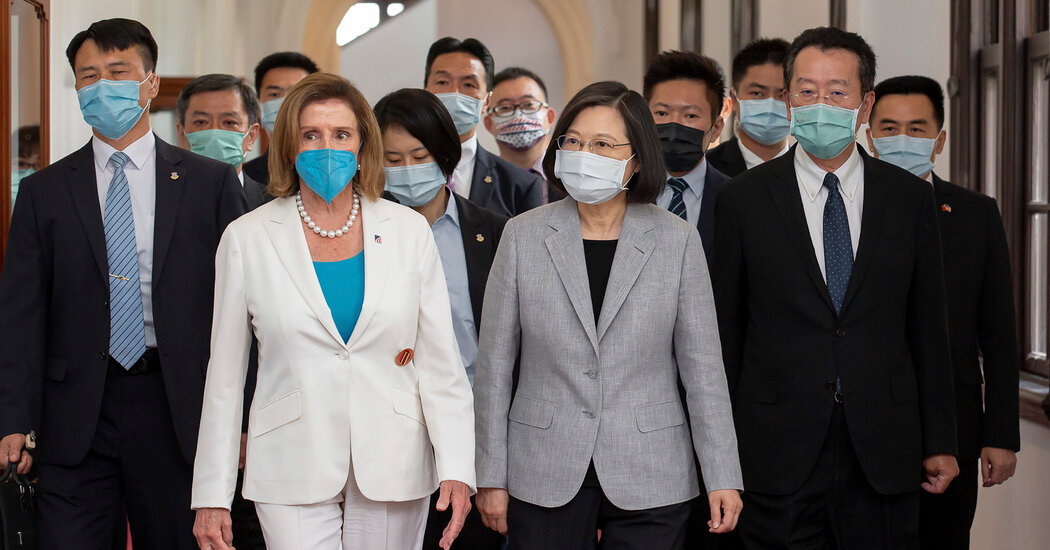 After weeks of silence ahead of a high-stakes visit to Taiwan, Speaker Nancy Pelosi was anything but understated on Wednesday during a day of high-profile meetings, in which she offered support for Taiwan and irked China.

In a pair of morning meetings that were partly broadcast online, Ms. Pelosi met with Taiwanese lawmakers and then with Taiwan’s president, Tsai Ing-wen, to whom she offered assurances of United States support despite threats from China.

“Today the world faces a choice between democracy and autocracy,” Ms. Pelosi said. “America’s determination to preserve democracy here in Taiwan and around the world remains ironclad.”

The meetings, though light on substance, were widely welcomed in Taiwan as a symbolic victory. Ms. Pelosi’s trip made her the highest-ranking active member of the United States government to visit the island in 25 years and offered a rare moment of international support for the self-ruled democratic island, which China has worked relentlessly to isolate.

They also presented an affront to China. Ms. Pelosi, who headed to South Korea late Wednesday afternoon, also met with human rights leaders in Taiwan and toured a human rights museum. It was in keeping with her long history of poking China in the eye. She also brought economic assurances, calling a trade deal between Taiwan and the United States hopefully imminent and holding a cordial meeting with the chairman of the Taiwan chip giant T.S.M.C.

The trip took place against the backdrop of increasingly heated warnings from China, which claims Taiwan as its territory. Beijing condemned the speaker’s visit in strong terms, responding with plans for military exercises near Taiwan. It may also damage a push by the White House to shore up support against China from key allies in the region who analysts say have felt sidelined by the trip.

On Wednesday, Hua Chunying, a spokeswoman for the Chinese foreign ministry, told a regular news conference in Beijing that more punishments for the United and Taiwan would follow from Ms. Pelosi’s visit.

“As for the specific countermeasures, what I can tell you is that they’ll include everything that should be included,” Ms. Hua said, according to People’s Daily. “The measures in question will be firm, vigorous and effective, and the U.S. side and Taiwan independence forces will continue feeling them.”

Yet as Ms. Pelosi toured Taipei, the capital, at times an almost carnival atmosphere followed. Hundreds turned out to watch her plane land, Taipei’s tallest building was illuminated with welcome messages, and protesters and supporters greeted her at her hotel, and then on Wednesday followed her to the legislature and at a human rights museum. Many cheered and held up supportive banners, while others denounced her for stirring up tensions with China.

When Ms. Pelosi arrived at Taiwan’s legislature with a police escort, a group offering support on one side of the building held up banners welcoming her. A gathering of pro-China demonstrators on the other held up signs calling her an “arsonist” and accusing her of interfering in China’s internal affairs.

A mood that was often celebratory in Taiwan was far more menacing across the strait separating China from Taiwan with the real potential for a military showdown.

China’s military has planned a series of live-fire drills, starting on Thursday, that would mark a direct challenge to what Taiwan defines as its coastline. Coordinates for the drills indicated that they could take place as close as 10 miles from Taiwan’s coast, well within the area that Taiwan says is a part of its territorial waters and closer than previous tests during a standoff 26 years ago.

On Taiwanese social media, jubilance sat alongside anxiety over what could be the riskiest military standoff with China in a generation. Some posted pictures of China’s military exercises and expressed concern. Eric Liu, a sales manager at a food company in central Taiwan, said he felt both exhilaration and worry.

“It’s unprecedented for Taiwan and my generation of Taiwanese,” Mr. Liu, 26, said in an interview during Ms. Pelosi’s visit. “I felt quite excited, and also sensed the danger.”

“I believe a war in the Taiwan Strait is inevitable, but I don’t want to see it happen anytime soon,” he added.

ROSWELL, Ga.--(BUSINESS WIRE)--Berkshire Hathaway HomeServices Georgia Properties, one of the largest and most successful real estate organizations in … END_OF_DOCUMENT_TOKEN_TO_BE_REPLACED

The real estate market seems to have a split personality.On the positive side for homebuyers, the number of properties for sale shot up by a … END_OF_DOCUMENT_TOKEN_TO_BE_REPLACED

Kim Tae-Ri plays a gun-toting time traveler in 'Alienoid.' Well Go USA Director Choi Dong-hoon likes a challenge. That much is apparent in his latest … END_OF_DOCUMENT_TOKEN_TO_BE_REPLACED