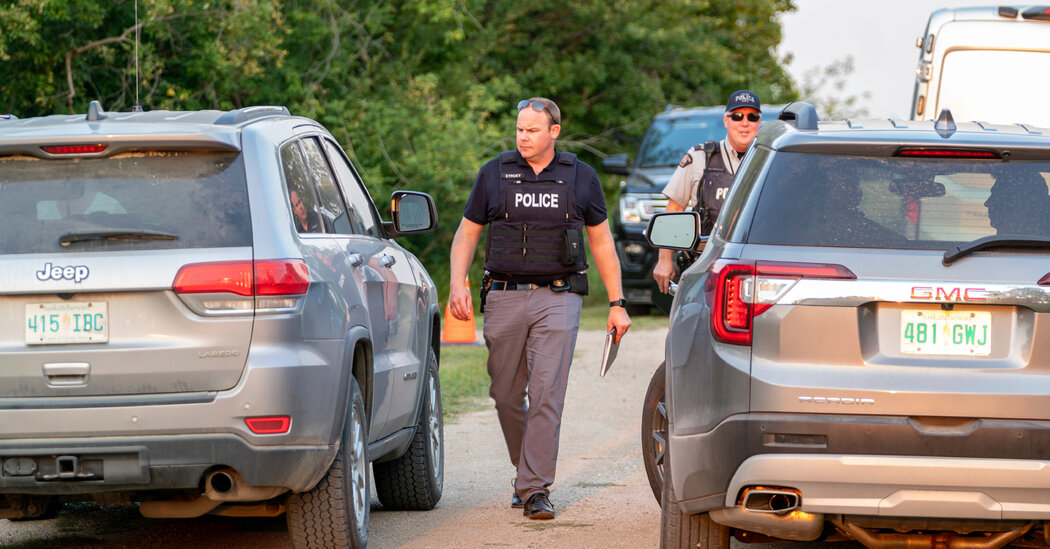 A manhunt stretched into Monday in the province of Saskatchewan for two men suspected of a brutal stabbing spree early Sunday that killed 10 people and injured at least 15 in one of the province’s worst ever cases of mass violence.

Canadian authorities told residents in the James Smith Cree Nation and the nearby village of Weldon to shelter at home as they expanded the search nearly 300 kilometers south to Regina, the capital of the province. Police were investigating 13 crime scenes and believed that the suspects had targeted some victims while others were attacked randomly.

The first stabbing was reported at 5:40 a.m. on Sunday, followed minutes later by calls from nearby locations. At 7:14 a.m. the Royal Canadian Mounted Police sent out a dangerous persons alert for two men who were considered “armed and dangerous” and were later identified as Damien Sanderson and Myles Sanderson.

The men were believed to be traveling in a black Nissan Rogue, according to authorities, who said a driver had spotted the vehicle at 11:45 a.m. in Regina.

A dangerous persons alert was expanded in the afternoon to the provinces of Manitoba and Alberta. But the authorities cautioned that the men may have changed their vehicle, and their direction of travel was unknown.

Evan Bray, the Regina police chief, said in a video posted Sunday night on Twitter that the men “are likely” in the city, without offering details of how the police reached that conclusion.

He reassured residents of Regina, a city of about 226,000 people, that the police had dedicated “a lot of resources” to finding the men and asked residents to provide any relevant information to the police.

“The public is often the key to helping us resolve these situations quickly,” he said.

Prime Minister Justin Trudeau said he was “shocked and devastated by the horrific attacks.”

“As Canadians, we mourn with everyone affected by this tragic violence,” he added.

Rhonda Blackmore, a commander with the Saskatchewan Royal Canadian Mounted Police, said at a news conference on Sunday that it “would be extremely difficult at this point in time” to speak to a motive in the attacks.

“If Damien and Myles are listening or receive this information, I would ask that they turn themselves into police immediately,” she added, addressing the two wanted men directly.

Hometown Deli, Paulsboro, N.J.Mike Calia | CNBCThree men were charged with fraud and other crimes in a scheme involving a company that was worth $100 … END_OF_DOCUMENT_TOKEN_TO_BE_REPLACED

The childhood home of "The Morning Show" actor Nestor Carbonell recently hit the market in Greenwich, CT, for $4.4 million.Fans will appreciate that … END_OF_DOCUMENT_TOKEN_TO_BE_REPLACED