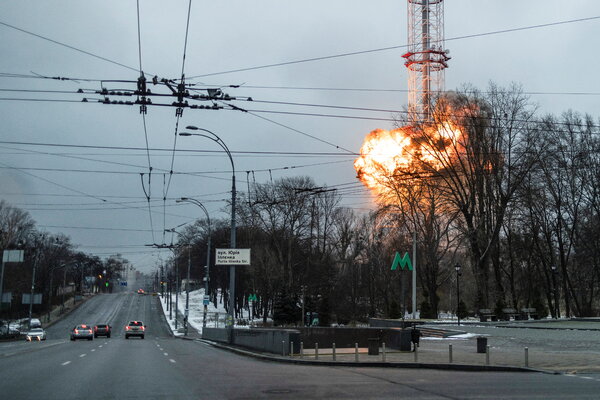 Africans who had been living in Ukraine say they were stuck for days at crossings into neighboring European Union countries, huddling in the cold without food or shelter, held up by Ukrainian authorities who pushed them to the ends of long lines and even beat them, while letting Ukrainians through.

At least 660,000 people have fled Ukraine in the five days following the start of Russia’s invasion, the United Nations refugee agency U.N.H.C.R. said. Most are Ukrainians, but some are students or migrant workers from Africa, Asia and other regions who are also desperate to escape.

Chineye Mbagwu, a 24-year-old doctor from Nigeria who lived in the western Ukrainian town of Ivano-Frankivsk, said she had spent more than two days stranded at the Poland-Ukraine border crossing in the town of Medyka, as the guards let Ukrainians cross but blocked foreigners.

“The Ukrainian border guards were not letting us through,” she said in a phone interview, her voice trembling. “They were beating people up with sticks” and tearing off their jackets, she added. “They would slap them, beat them and push them to the end of the queue. It was awful.”

The African Union and President Muhammadu Buhari of Nigeria have condemned the treatment of Africans fleeing Ukraine following social media reports about border guards hindering them from leaving. Africans have also reported being barred from boarding trains headed to the border.

“Reports that Africans are singled out for unacceptable dissimilar treatment would be shockingly racist” and violate international law, the African Union said.

“Everything is simple,” he said. “We are first to release women and children. Foreign men must wait for women and children to come forward. We will release all foreigners without hindrance,” he added, in a written response to questions. “Same goes for blacks.”

Ms. Mbagwu, the Nigerian doctor, managed to reach Warsaw, but said she crossed the border only by struggling and pushing her way through.

“They would say ‘only women and children can pass through,’” she said. “But they were letting some Ukrainian men through. And whenever a Black lady would try to pass, they said: ‘Our women first,’” Ms. Mbagwu added.

“There was no shelter from the cold. It snowed. There was no food, water, or a place to rest. I was literally hallucinating from sleep deprivation,” she said.

She said her 21-year-old brother, a medical student, had been blocked at the border since Friday, but made it into Poland after four days of trying.

Not all foreigners reported ill treatment by Ukrainian authorities at the border crossings.

A Pakistani student and an Afghan national who crossed from Ukraine into Poland on Saturday said the only problem was very long lines. And a group of Vietnamese workers crossed easily into Moldova on Monday.

Mohammed Saadaoui, a 23-year-old Moroccan pharmacy student who traveled from the Ukrainian city of Odessa to Warsaw, said he did not have any problems.

“But we took a long time to find the good border crossing where there would not be too many people,” he said. “There, we were treated the same way as the Ukrainians.”

The International Organization of Migration estimated that there are more than 470,000 foreign nationals in Ukraine, including a large number of overseas students and migrant workers. At least 6,000 of them have arrived in Moldova and Slovakia alone over the past five days, according to the I.O.M., and many more have crossed into Poland.

Many of the foreigners fleeing Ukraine said they were warmly welcomed in neighboring Poland, Moldova, Hungary and Romania. But Mr. Buhari, the Nigerian president, said there were reports of Polish officials refusing Nigerians entry.

Piotr Mueller, the spokesman for the Polish prime minister, denied this, saying, “Poland is letting in everyone coming from Ukraine regardless of their nationality.”

Piotr Bystrianin, head of the Ocalenie Foundation, a Polish refugee charity, said that so far, “problems were on the Ukrainian side.”

More than 300,000 people have fled from Ukraine to Poland since the Russian invasion began, according to Poland’s interior ministry. Makeshift accommodation is being set up across the country, and Poles are helping Ukrainians on a massive scale, transporting them through the border, hosting them in their homes, feeding and clothing them.

On Monday, Poland’s ambassador to the United Nations, Krzysztof Szczerski, said his country welcomed all foreign students who were studying in Ukraine, and invited them to continue their studies in Poland.

In the years leading up to the Russian invasion, Poland had taken a hard line on migrants trying to enter the country. The army and border guards have pushed asylum seekers from the Middle East and Africa back into Belarus. Last week, aid organizations said a 26-year-old man from Yemen froze to death at that border.

Some of the foreigners arriving in Poland from Ukraine over the past few days were exhausted and freezing, according to local aid organizations on the ground. Some were taken directly to hospitals because of their injuries.

Ahmed Habboubi, a 22-year-old French-Tunisian medical student, said all foreign nationals, including Africans, Israelis, Canadians and Americans, were told to go to one gate at the Medyka crossing from Ukraine to Poland, which would only process four people every couple of hours, while Ukrainians were allowed to pass freely through another gate.

“The Ukrainian army beat me up so much I couldn’t properly walk,” he said in an phone interview. “When I finally managed to enter Poland, the Polish authorities took me straight to the hospital,” he added.

“It was absolute chaos. We were treated like animals. There are still thousands of people stranded there.”

He said that Poland had welcomed him warmly.

Dennis Nana Appiah Nkansah, a Ghanaian medical student, said he saw the same discrimination at the crossing from Ukraine into the Romanian town of Siret — one rule for Ukrainians and another for everyone else. Thousands of foreigners, including Zambians, Namibians, Moroccans, Indians and Pakistanis, were directed to one gate that was mostly closed, while another reserved for Ukrainians was open and people flowed through.

Over about three hours, four or five foreigners were allowed to leave, while there was a “massive influx” of Ukrainians crossing, he said. “It’s not fair,” he said, but “we understood that they have to see to their people first.”

Mr. Nkansah, 31, said he had organized 74 Ghanaian and Nigerian students to pitch in and hire a bus to flee together. They reached the border early Saturday morning, he said, but it took them 24 hours to cross over.

Emmanuel Nwulu, 30, a Nigerian student of electronics at Kharkiv National University, said that when he tried to board a train in Ukraine going west toward the border, Ukrainian officials told him, “Blacks could not board the train.” But Mr. Nwulu and his cousin managed to force their way aboard.

Taha Daraa, a 25-year-old Moroccan student in his fourth year studying dentistry in Dnipro Medical Institute, started his journey out on Saturday around noon and crossed the border into Romania in the early hours of Monday morning after days without sleep.

“We were treated so badly. We took buses to the Romanian border. It was very scary then we had to walk across the border while hearing gunshots,” he said via WhatsApp. “All we did was pray. Our parents prayed as well for our safety. It’s the only protection we had,” he added.

“I witnessed a lot of racism.”

He said he was in a group with two other Moroccans and many other Africans and he asked a Ukrainian border guard to let them through. The guard started firing his gun in the air to scare them and so they stepped back.

“I have never felt so much fear in my life,” Mr. Daraa said. “He asked us to move back. Snow was falling on us. As the crowd got bigger, they gave up and let everyone through.”

He said the Romanians were taking good care of him and other foreigners and providing them with food and other necessities.

“They gave us everything,” he said.

AUSTIN, Texas--(BUSINESS WIRE)--As the first multifamily management company to be recognized in the Public Relations and Marketing Excellence Awards, … END_OF_DOCUMENT_TOKEN_TO_BE_REPLACED

There have been whispers of cooling housing and rental prices in the San Francisco Bay Area, but that hasn't yet translated into practical, noticeable … END_OF_DOCUMENT_TOKEN_TO_BE_REPLACED

Cars pass in Independence Square at twilight in Kyiv, Ukraine, Monday, Oct. 31, 2022. Rolling ... [+] blackouts are increasing across Ukraine as the … END_OF_DOCUMENT_TOKEN_TO_BE_REPLACED