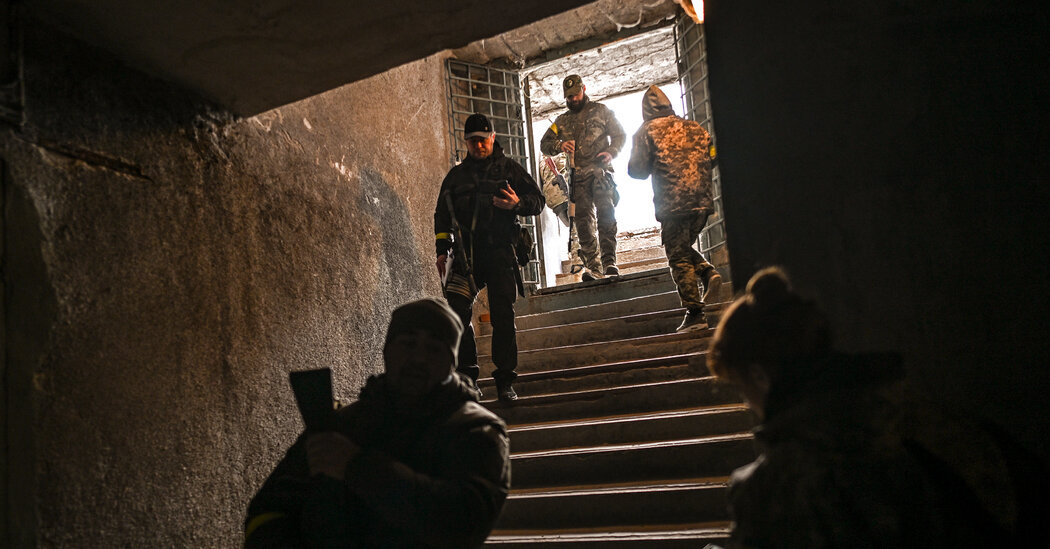 An article of faith in global sports — that athletes should not be punished for the actions of their governments — crumbled on Monday, when executives worldwide moved to banish Russians from competitions and deepen the country’s isolation for its invasion of Ukraine.

The International Olympic Committee recommended that athletes from Russia and Belarus, which has allowed Russian troops to use its territory, be barred from events. FIFA, soccer’s international governing body, effectively blocked Russia from qualifying for this year’s men’s World Cup. And ice hockey associations in the Czech Republic, Finland and Sweden suspended Russia from a tournament they had staged jointly for decades.

Although there were loopholes and scattered uncertainties, the penalties amounted to a bracing rebuke of Moscow and Minsk by a sports world that has long labored furiously, if sometimes unconvincingly, to depict competition as separate from politics.

The International Paralympic Committee will decide on Wednesday whether to allow Russian and Belarusian athletes to compete in the Paralympic Games, which are scheduled to open in Beijing on Friday.

But the day’s events left little doubt that Russia and Belarus, which had already drawn scrutiny for doping violations and oppression, would become further separated from the wider athletic world.

“This will continue to be a contest of two different visions of what sport is and who is allowed to participate in and control sport,” said Andrés Martinez, a research scholar at Arizona State University’s Global Sport Institute. “I think this is a bit of a reset, though, in that it does set an important precedent and a standard that sporting federations cannot continue to act with impunity and just let the highest bidder dictate what happens in sport, oblivious to other considerations, including the behavior of those highest bidders.”

The most potentially far-reaching effort on Monday came from the I.O.C., which cited “the integrity of global sports competitions” and “the safety of all the participants” when it recommended that Russian and Belarusian athletes be blocked from competitions.

“While athletes from Russia and Belarus would be able to continue to participate in sports events, many athletes from Ukraine are prevented from doing so because of the attack on their country,” the I.O.C. said in a statement, which noted that it issued its recommendation “with a heavy heart.”

It will fall to event organizers and the federations that administer individual sports to decide how, or if, to adopt the I.O.C.’s recommendation, which the committee suggested might not be enforced “on short notice for organizational or legal reasons.”

That qualifier appeared to be a nod to the imminence of the Paralympic Games, which have been expected to draw more than 70 athletes from Russia and about a dozen from Belarus.

The I.O.C.’s recommendation came hours before FIFA announced that it had suspended Russia and its teams from all competitions and ejected the country from qualifying for the 2022 World Cup only weeks before it was to play for one of Europe’s final places in this year’s tournament.

FIFA, which had come under pressure for its initial hesitance to bar Russia from competition, and its European counterpart, UEFA, said the ban on Russia would be in place “until further notice.”

“Football is fully united here and in full solidarity with all the people affected in Ukraine,” FIFA said in a statement. Ukraine’s team, which is set to play Scotland in its own World Cup playoff in March, will remain in the competition.

UEFA, which has decided to move this year’s Champions League final to St.-Denis, France, from St. Petersburg, Russia, then went a step further in breaking its deep ties to Russia: It announced that it had ended a sponsorship agreement with the Russian energy giant Gazprom. The deal was worth a reported $50 million a year to European soccer.

It was unclear whether FIFA’s decision to bar Russia would face a court challenge. Russia and some its athletes have successfully fought exclusion from other events, including the Olympic Games, by getting punishments watered down through appeals to the Court of Arbitration for Sport.

Any efforts to keep Russian athletes out of other competitions could also spark legal battles. Pozdnyakov, the Russian Olympic Committee chairman, said Russian officials intended to “consistently defend the rights and interests of Russian athletes and provide all necessary assistance to our national sports federations to challenge discriminatory decisions.”

Some penalties could prove harder to fight than others.

Hockey executives in the Czech Republic, Finland and Sweden said Monday that Russia would not be allowed to participate in this year’s Euro Hockey Tour, and executives signaled that they were looking to replace Russia permanently.

“The Russian invasion of Ukraine is a terrible situation, and we in the ice hockey world are completely behind the people of Ukraine,” said Anders Larsson, the Swedish Ice Hockey Association’s chairman. “Inviting a Russian national ice hockey team to the Euro Hockey Tour tournaments in Stockholm, Helsinki and Prague is therefore completely unthinkable at the moment.”

The application of the I.O.C.’s recommendation could also be particularly thorny in individual sports and competitions in which athletes are competing more for themselves than for their nations.

In cross-country skiing, Natalia Nepryaeva of Russia holds the top spot in the World Cup standings but could lose that ranking if she cannot participate in several coming races.

Tennis has the complexity of seven ruling organizations. On the same day the I.O.C. recommended the ban, Daniil Medvedev, a Russian, took over the top sport in the men’s world rankings.

The ATP Tour heralded the achievement on its website with a picture of Medvedev next to the Russian flag. However, Medvedev moved to Monaco years ago and has campaigned for peace on his social media channels.

The ATP Tour made no immediate announcement about whether it would follow the I.O.C. recommendation, nor did the WTA, which manages the women’s professional tour and has three players from Russia and Belarus in the top 20, including Victoria Azarenka, who is on the organization’s board.

On Monday, Elina Svitolina, a top player from Ukraine and the top seed this week in a tournament in Mexico, announced that she would not play her first-round match against Anastasia Potapova of Russia. In a Twitter post, Svitolina urged the governing bodies of tennis to follow the I.O.C.’s guidance.

Although Monday’s maneuvers against Russia were particularly forceful, the country has clashed with sports executives in recent years over its reliance on a state-run doping operation. Still, Russian athletes and teams had faced the most marginal of consequences. At the Beijing Olympics, which ended Feb. 20, Russian athletes appeared as members of the “Russian Olympic Committee,” and did not formally compete under the Russian tricolor flag or hear the Russian national anthem at medal ceremonies.

And in December, Olympic officials barred the Belarusian president, Alexander Lukashenko, from I.O.C. events, including the Beijing Games. Olympic officials complained at the time that Belarusian athletes were “not appropriately protected” from what they described as “political discrimination.”

Monday’s wave of condemnation, though, proved far broader and came after days of swelling anger among sports executives and demands from political leaders and athletes alike. Last week, Olympic executives pressed federations to cancel or move competitions from Belarus and Russia.

Vladimir V. Putin, the president of Russia, who has long heralded the role of sports in his own life and the role of athletics in his country’s ambitions, has also increasingly come under personal pressure. The International Judo Federation recently suspended him from his role as its honorary president, and World Taekwondo rescinded the honorary black belt it gave him in 2013.

On Monday, the I.O.C. withdrew its highest honor from Putin, who received it in 2001. He attended the opening ceremony of the Beijing Games on Feb. 4, when his forces were massing at the Ukrainian border ahead of their invasion.

AUSTIN, Texas--(BUSINESS WIRE)--As the first multifamily management company to be recognized in the Public Relations and Marketing Excellence Awards, … END_OF_DOCUMENT_TOKEN_TO_BE_REPLACED

There have been whispers of cooling housing and rental prices in the San Francisco Bay Area, but that hasn't yet translated into practical, noticeable … END_OF_DOCUMENT_TOKEN_TO_BE_REPLACED

Cars pass in Independence Square at twilight in Kyiv, Ukraine, Monday, Oct. 31, 2022. Rolling ... [+] blackouts are increasing across Ukraine as the … END_OF_DOCUMENT_TOKEN_TO_BE_REPLACED