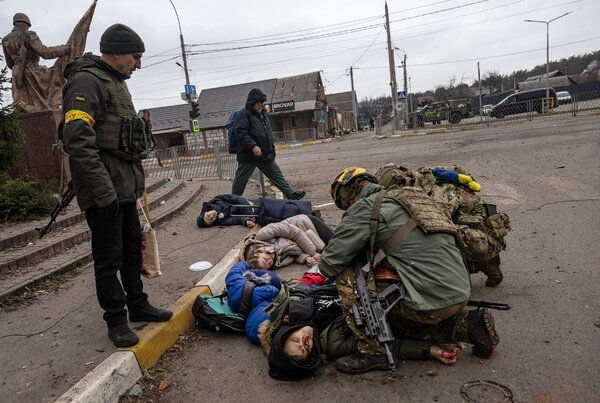 MEDYKA, Poland — Iryna Dukhota has been married to her husband for 26 years. She met him when they were young, as he was riding his bike through her neighborhood in Kyiv, Ukraine’s capital.

But a few days ago, on a gray, windswept morning, with thousands of people rushing around them, the couple stood at the Ukraine-Poland border, lips quivering. After all these years, it was time to say goodbye.

“I told him ‘I love you’ and ‘We will see each other soon,’” Ms. Dukhota said, her eyes pooling.

Now, she says, she does not know when or even if she will ever see him again.

As the Russian Army bears down on Ukraine from the north, south and east, a mass migration of millions of civilians is gathering like a storm over the plains.

But the international border gates are a painful filter, splitting families apart. The Ukrainian government has mandated that men aged 18 to 60 are not allowed to leave the country, so the crowds pouring into Poland, Hungary and other neighboring nations are eerily devoid of men. It is almost exclusively women and young children who pass through the checkpoints after heartbreaking goodbyes. The Ukrainian men, whether they want to or not, turn back to fight.

Some Ukrainian women referred to the separations as “a little death.”

Medyka, Poland, is one such sorting point. A small village on the Poland-Ukraine border among endless wheat fields, faintly illuminated by a pale sun at this time of year, its roads are now lined with Ukrainian women and children marching west, bundled against the wind.

While a spurt of nationalism is being celebrated in Ukraine, and young men and their fathers are pouring into military recruitment centers, it is a much different mood at the border. The refugees said they felt cut off not only from their country, but from their families. They talk of being bewildered, lost and lonely. Overnight, so many mothers have become heads of households in a foreign land, hefting suitcases, carrying young children, working two cellphones at once or pulling nervously on cigarettes.

“I still can’t believe I’m here,” said Iryna Vasylevska, who had just left her husband in Berdychiv, a small town in Ukraine’s besieged north. Now on her own, with two children, 9 and 10, she said she had been so stressed that she had not slept for two days nor had she been able to swallow much food.

“Everything is blocked,” she said, holding a shaking hand up to her neck.

Her husband, Volodymyr, sits at home awaiting further instructions from the authorities. He sounded sorrowful over the phone about being hundreds of miles from his wife and children, but he insisted, “I feel lighter in my heart knowing they don’t hear the sounds of sirens anymore.”

Another man, Alexey Napylnikov, who urged his wife and daughter to flee for their safety, said: “This separation is like falling into emptiness. I don’t know if I am ever going to see them again.”

Under martial law, which was introduced by the Ukrainian government on Feb. 24, all men 18 to 60 are forbidden from leaving the country unless they have at least three children or work in certain strategic sectors, such as bringing in weapons. A few men were able to skinny through when the war first erupted, but very soon after, Ukrainian border guards began searching cars lined up at the frontier and ordering men to stay behind.

To some, this policy seems sexist. Women have stayed behind to fight, as well. So why can families not choose which parent will leave with the children? When asked about this, a Ukrainian official cited the country’s military policy, saying that while some women volunteer to serve, they are not legally obliged to do so.

But it is not just husbands and wives being pulled apart. Multigenerational families have been ruptured, too. There is an expression in Ukrainian that goes something like this: “It is good to have children so there is someone to bring you a glass of water when you are old.” The culture is to stay near your parents and help them in old age.

But among the crowds flowing through the gates in Medyka and at other border points, there are almost no older adults, either. Most have chosen to stick it out in Ukraine.

“I have been through this before, and the sound of sirens doesn’t scare me,” said Svetlana Momotuk, 83, speaking by phone from her apartment in Chornomorsk, near the port of Odessa.

When her grandson-in-law came to say goodbye, she said, she shouted at him: “You’re not taking my children with you! What the hell are you thinking?”

Now, she says, she is relieved they left, though she dearly misses them.

If they expected an immense sense of relief exiting a war-torn country and stepping across an international border, many refugees said it had not yet come. Instead, there is guilt. Several women said they felt horrible leaving their husbands and their parents in the path of an advancing army.

Even though she is now safe, taken in by a Polish friend, Ms. Dukhota said, “There is some sort of sadness inside me.”

Her husband has never held a gun before — he owns a string of convenience stores. And now, like so many other Ukrainian men, he has signed up with a local defense unit to take on the Russians.

The mothers who made it out also worry about resentment from friends and family who stayed behind. They fear they will be seen as less patriotic at a time of great crisis. Still, some women said they ultimately decided to leave while they could, for the safety — and sanity — of themselves and their children.

“My baby couldn’t stand the explosions anymore,” said a woman named Mariana, the mother of a 4-year-old girl. She stood alongside Highway 28 in Medyka making calls from two cellphones, desperate to connect with the ride she had lined up and get out of the cold.

Almost all of their stories reveal that the decisions to separate were as agonizing as the separations themselves.

“For six days my husband told me to leave, and I refused,” Ms. Dukhota said.

She did not want to be alone, and like so many others, she kept hoping that the fighting would stop in a day or two.

But after the bombings drew closer, she finally relented and snatched up some warm clothes, including a green hoodie that she wore the other day as she walked hunched over in the cutting wind toward Medyka, her first steps as a refugee.

Ms. Dukhota and her husband stayed together until the last possible minute. Like others, they moved together out of immediate danger to cities like Lviv, in Ukraine’s west, that so far have been spared the relentless bombardment that has pummeled other places.

Some women were dropped off at Lviv’s train station to catch a packed train to Poland. Others said their husbands drove them all the way to the border. At the train stations, some women said, there were barricades patrolled by guards to make sure no men were able to leave with them.

Each couple interviewed remembered their last words. Many kept it simple. Often, a young child was looking up at them, confused, standing between two distraught parents, tears streaming down their faces.

“Please don’t worry, everything is going to be OK,” were Ms. Vasylevska’s last words to her husband.

Then she started crying and could not say any more.

AUSTIN, Texas--(BUSINESS WIRE)--As the first multifamily management company to be recognized in the Public Relations and Marketing Excellence Awards, … END_OF_DOCUMENT_TOKEN_TO_BE_REPLACED

There have been whispers of cooling housing and rental prices in the San Francisco Bay Area, but that hasn't yet translated into practical, noticeable … END_OF_DOCUMENT_TOKEN_TO_BE_REPLACED

Cars pass in Independence Square at twilight in Kyiv, Ukraine, Monday, Oct. 31, 2022. Rolling ... [+] blackouts are increasing across Ukraine as the … END_OF_DOCUMENT_TOKEN_TO_BE_REPLACED