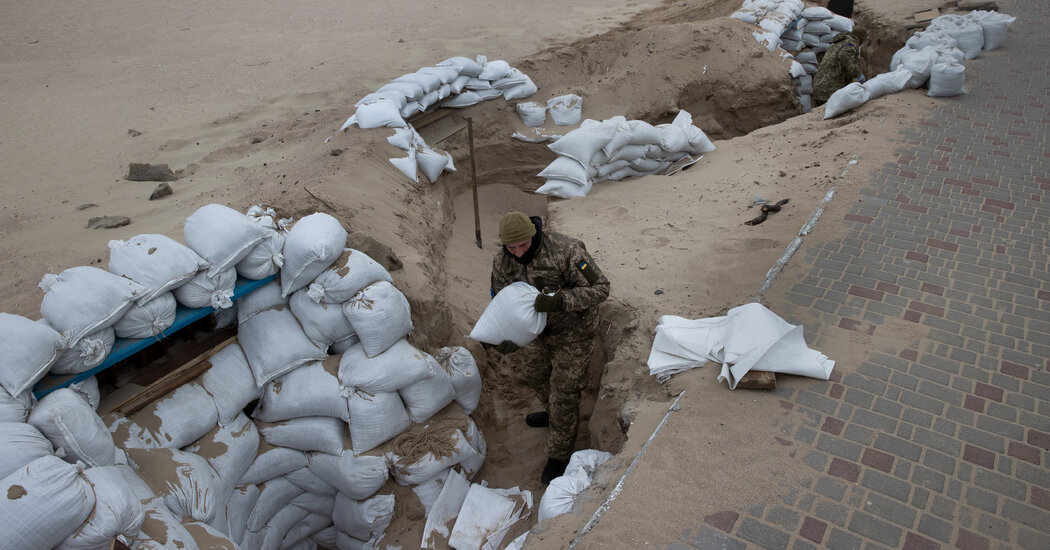 ODESSA, Ukraine — Ukrainian forces carried out counter-offensives against Russian positions on Wednesday, seeking to inflict what one official called “maximum losses,” even as the invading Russian military stepped up its lethal attacks on cities.

In Mariupol, an airstrike destroyed a theater where about 1,000 people had taken shelter, according to city and regional administrators, and photos and videos posted online showed the burning wreckage of the building. Officials in Mariupol, the besieged southern city that has suffered the most intense bombardment, said they could not yet estimate the number of casualties among civilians, who might have been in a bomb shelter beneath the theater.

After falling back under a relentless pounding over the war’s first weeks, Ukrainian troops tried to regain some momentum with counterattacks on Russian positions outside of Kyiv and in the Russian-occupied city of Kherson, in Ukraine’s south, a senior Ukrainian military official said.

Rather than seek to regain lost territory, Ukrainian forces tried to cause as much destruction and death as possible, attacking Russian troops and equipment with tanks, fighter jets and artillery, the official said, speaking on condition of anonymity to discuss sensitive military information.

“In the task of inflicting maximum losses, we’ve done excellently,” the official said.

While President Volodymyr Zelensky of Ukraine pleaded with Congress for more aid and President Biden promised more weaponry, Russia’s President Vladimir V. Putin falsely accused Ukraine of seeking weapons of mass destruction and asserted that what he called an “economic blitzkrieg” by the West, aimed at destroying Russia, had failed.

Mr. Putin also sneered at Russians who oppose the war, saying the Russian people could distinguish “true patriots from the scum and the traitors, and just to spit them out like a midge that accidentally flew into their mouths.”

Ukrainian and Russian negotiators held a third consecutive day of talks on a possible settlement to the conflict, and in typical fashion, the Kremlin left a muddy picture of its intentions. Mr. Putin’s bellicose, often false statements, larded with World War II references, clashed with more conciliatory comments from his underlings.

But little appeared to have changed on the battlefield. The war in Ukraine, about to enter its fourth week, has become a grinding daily slog with little evidence of significant gains for either side.

Details of the Ukrainian offensive could not be fully established independently, though several top Ukrainian officials, including key aides to Mr. Zelensky, confirmed that the counterattacks were underway.

In Kyiv, missile strikes and heavy artillery sounded overnight and in the early morning on Wednesday in exchanges in the outlying suburbs that were notably heavier and louder than in previous days. Two people were wounded and a residential building was damaged in a strike that landed near the city zoo, the second time in two days that shells have landed close to the city center.

Kherson was the first (and so far, only) major city to be fully taken over by Russian forces, which have turned it into a forward military base from which they have launched attacks on surrounding cities and villages, according to Ukrainian officials. On Tuesday, the Russian Defense Ministry announced that it had taken control of the entire Kherson region, giving Russian forces a significant foothold in southern Ukraine that Ukraine’s military will have difficulty dislodging.

Even so, neither side can be said to have made much progress militarily. The Institute for the Study of War, which has been tracking developments closely, noted in a Tuesday evening assessment that, for nearly two weeks, Russian forces have not been conducting extensive simultaneous attacks that would allow them to seize control of multiple areas at once in Ukraine. And they are unlikely to do so in the next week, it said.

In the absence of significant military gains, Russian forces on Wednesday continued a campaign of terror against Ukrainian civilians.

At least 10 people were killed when a Russian strike hit a bread line in Chernihiv, a city north of Kyiv that has been subject to intense shelling by Russian troops seeking to move on the capital. Ukraine’s prosecutor general’s office said in a statement that the attack occurred at about 10 a.m. as people were lined up at a grocery store. Photos released by the prosecutor’s office showed several bodies scattered around a dirt yard.

Using heavy artillery, cruise missiles and fighter jets, Russian forces have systematically targeted civilian areas with no military presence, striking apartment buildings, schools and hospitals in cities and villages all over a broad front in the north, east and south of Ukraine. The attacks may have killed thousands of civilians, though reaching a precise count of the dead has been impossible.

Saying it was “profoundly concerned” by Russia’s use of force, the International Court of Justice ordered Russia on Wednesday to suspend its military operations immediately, pending its full review of a case submitted by Ukraine last month. However, the order was not expected to lead to any immediate cessation in the onslaught.

According to the United Nations, at least 726 civilians have been killed, including 64 children, since the invasion began on Feb. 24, though its figures do not include areas where fighting has been heaviest, like Kharkiv and Mariupol. In Mariupol alone, which has been turned into a hellscape of burning and decimated buildings, local authorities say at least 2,400 have been killed, and probably far more.

In Kharkiv, Ukraine’s second largest city, the municipal emergency services agency first reported on Wednesday that 500 civilians had been killed since the war began, but then revised that number to 100 later in the day. In any case, the agency said in statement on Facebook, the true number of deaths could be much higher, noting that emergency workers were continuing to scour the rubble of residential neighborhoods for more bodies, often under fire.

Western defense and intelligence agencies estimate that each side has suffered thousands of combatants killed.

Mr. Zelensky’s appeal to Congress on Wednesday was in part a desperate effort to obtain the weaponry and defenses capable of fending off such attacks. Central to this appeal was a call for a no-fly zone to be imposed over Ukraine, aimed at preventing Russian fighter jets, which cause some of the most severe death and destruction, from operating over Ukrainian territory. “Close the sky” has become a rallying cry for Ukrainian officials and regular citizens.

“Russia has turned the Ukrainian sky into a source of death for thousands of people,” Mr. Zelensky said.

Knowing that the request had little chance of being approved, given that it would thrust American pilots into direct confrontation with the Russians, Mr. Zelensky quickly pivoted to something to which Republicans and Democrats have been far more receptive: asking for more weapons to enable his people to keep up the fight themselves.

Mr. Biden announced $800 million in new military aid to Ukraine, including antiaircraft and antitank missiles, body armor, vehicles, drones and small arms, bringing to $2 billion the amount delivered or pledged since early last year. But as expected, he did not offer to deliver warplanes or enforce a no-fly zone.

The United States and its allies have relied primarily on financial sanctions that are already devastating the Russian economy.

Mr. Putin, in a televised videoconference with top officials, once again falsely described the government in Kyiv, led by a Jewish president and prime minister, as being “pro-Nazi” and on its way to acquiring nuclear weapons. “Their aim, of course, would have been Russia,” he said.

And then he went deeper into unreality, accusing the government in Kyiv of disregard for the suffering of the Ukrainian people that his own forces were bombing every day.

“The fact that people are dying, that hundreds of thousands, millions have become refugees, that there is a real humanitarian catastrophe in cities held by neo-Nazis and armed criminals,” he said. “They’re indifferent.”

Russian officials closer to the talks said Wednesday there had been signs of progress, though even there, the picture was unclear. They said the idea of a neutral Ukraine, with a status like that of Sweden or Austria, was on the table, which their Ukrainian counterparts disputed.

Sergei V. Lavrov, Russia’s foreign minister, told a Russian television network that the status of the Russian language and Russian news outlets in Ukraine were under discussion, and that “there are concrete formulas that are close to being agreed on.”

Mr. Zelensky indicated that he was willing to compromise on one of Russia’s central demands. In his daily video message, he said Ukraine “must recognize” that it would not join NATO. He added that negotiations had become more “realistic.” But one of his negotiators, Mykhailo Podolyak, said Ukraine needed “absolute security guarantees,” including military support from its allies.

Michael Schwirtz reported from Odessa, Ukraine; Valerie Hopkins from Lviv, Ukraine; and Carlotta Gall from Kyiv. Reporting was contributed by Anton Troianovski and Ivan Nechepurenko from Istanbul, and Richard Pérez-Peña from New York.

AUSTIN, Texas--(BUSINESS WIRE)--As the first multifamily management company to be recognized in the Public Relations and Marketing Excellence Awards, … END_OF_DOCUMENT_TOKEN_TO_BE_REPLACED

There have been whispers of cooling housing and rental prices in the San Francisco Bay Area, but that hasn't yet translated into practical, noticeable … END_OF_DOCUMENT_TOKEN_TO_BE_REPLACED

Cars pass in Independence Square at twilight in Kyiv, Ukraine, Monday, Oct. 31, 2022. Rolling ... [+] blackouts are increasing across Ukraine as the … END_OF_DOCUMENT_TOKEN_TO_BE_REPLACED