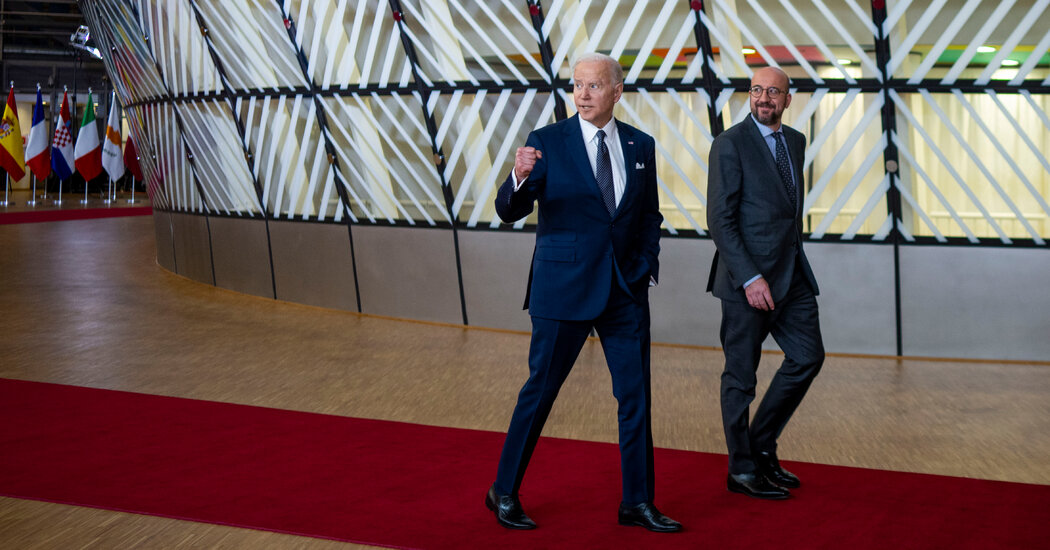 KYIV, Ukraine — A month into a war that began with widespread expectations of a quick Russian rout, Ukraine’s military has begun a counteroffensive that has altered the central dynamic of the fighting: the question is no longer how far Russian forces have advanced, but whether the Ukrainians are now pushing them back.

Ukraine has blown up parked Russian helicopters in the south, and on Thursday claimed to have destroyed a naval ship in the Sea of Azov. Its forces struck a Russian resupply convoy in the Northeast.

Western and Ukrainian officials also have claimed progress in fierce fighting around the capital, Kyiv.

The asserted gains in territory are hard to quantify, or verify. In at least one crucial battle in a suburb of Kyiv, where Russian troops had made their closest approach to the capital, brutal street fighting still raged on Thursday and it was not clear that Ukraine had regained any ground.

But even this muddied picture of Ukrainian progress is helpful for the country’s messaging to its citizens, and to the world — that it is taking the fight to a foe with superior numbers and weaponry, and not just hunkering down to play defense. And it underscores the flawed planning and execution that has bedeviled Russian forces from the start, including supply shortages and demoralizing conditions for its soldiers. Those missteps have enabled Ukraine to unexpectedly go on the offensive.

In particular, by preventing Russian troops from capturing Irpin, a suburban town about 12 miles from the center of Kyiv, Ukraine showed that its strategy of sending small units out from the capital to engage the Russians, often in ambushes, has had success, at least for now.

Western governments have issued cautiously optimistic assessments of the counteroffensive. In an intelligence report released Wednesday, the British Ministry of Defense said the Ukrainian moves were “increasing pressure” on the Russians to the east of Kyiv, and that Ukrainian soldiers “have probably retaken Makariv” and another small town directly north of the capital.

While noting the inconclusive state of the battle, the report raised what it called a “realistic possibility” that the Ukrainian counteroffensive could succeed in encircling and cutting the supply lines of the Russian invasion force in the area, in what would be a clear tactical victory for Ukraine. At the least, it said, “the successful counter attacks by Ukraine will disrupt the ability of Russian forces to reorganize and resume their own offensive toward Kyiv.”

In the counteroffensive around Kyiv, the Ukrainian military ordered lower-level commanders to devise strategies for striking back in ways appropriate to their local areas. In many cases, this involved sending small units of infantry on reconnaissance missions to find and engage Russian forces that had fanned out into villages near Kyiv, a soldier on one such mission said over the weekend.

In the battles to the northwest of the capital, time is likely on Ukraine’s side, analysts say. Russian columns have run low on fuel and ammunition, intercepted radio transmissions suggest. Soldiers have been sleeping in vehicles for a month, in freezing weather.

And military analysts see this axis of the Russian advance, though it came the closest to the center of Kyiv, as the most troubled by logistical failures and setbacks in combat.

Still, without knowing now which army is actually advancing in the contested towns and villages, the war here is in a state of uncertainty, said Michael Kofman, the director of Russia studies at CNA, a research institute in Arlington, Va.

More broadly, throughout the country, time is also on Ukraine’s side in at least stalling the initial Russian invasion force. But this may shift. An initial upswelling of patriotism could wane as the war’s grim reality sets in or as civilians begin to grasp Ukraine’s military losses, about which little is known.

By Thursday, the intensive fighting had set so many fires in towns around Kyiv that the city was shrouded in an eerie, white haze of smoke. But signs of actual, on the ground progress were elusive. Ukrainian forces have been unable to demonstrate they control villages or towns previously held by the Russian army.

“They are fighting day and night and everything is burning,” said Olha, 33, a saleswoman who escaped from Irpin Wednesday evening, and who was not comfortable providing her full name. She was interviewed at an aid station for displaced civilians where a continuous, cacophonous rumble of explosions could be heard from the fighting nearby.

Earlier on Wednesday, Kyiv’s mayor, Vitaly Klitschko, told a news conference that Ukrainian forces had in fact pushed back Russian troops and that “almost the whole of Irpin is in Ukrainian hands.” Other Ukrainian and Western officials have also offered more optimistic accounts than could be verified from witnesses.

The deputy police chief of Irpin, Oleksandr Bogai, said Russian soldiers were still in the town, occupying several districts and fighting Ukrainian forces. That is essentially the same situation that has persisted for nearly the entire month of the war. “There are huge explosions and a lot of smoke,” he said by telephone. “Civilians are holed up in basements. I don’t know exactly what is happening.”

In Makariv, another battleground town to the west of Kyiv that Ukrainian officials claimed to have recaptured this week, the fighting was also ongoing, Vadym Tokar, the mayor, said in a telephone interview.

“I don’t understand where this nonsense came from,” he said of reports his town had been liberated. “It is not true. We have shelling and we have Russian tanks shooting into the town right now.”

To be sure, some Western and Ukrainian official accounts have also offered more measured assessments. The head of the Kyiv regional military administration, Oleksandr Pavliuk, said Thursday that the counteroffensive had managed to “improve positions” in Irpin and Makariv, but did not assert control.

Mykhailo Podolyak, a senior adviser to President Volodymyr Zelensky, announced the counteroffensive on March 16, after it became clear the Russian armored columns had become bogged down, plagued by logistical and communications glitches and taking losses in ambushes.

Russian forces have continued to make advances in eastern Ukraine, where its military claimed on Thursday to have captured Izyum, a provincial town in the Kharkiv region that had been under attack for weeks. Ukraine denied it was captured. Neither account could be independently confirmed.

In the fighting around Kyiv, civilians evacuating from the combat zone painted a picture, not so much of liberated towns but of chaotic, lethal violence.

Vladimir, 66, a retired furniture factory worker who declined to offer his last name, walked out of Irpin Thursday morning after his home burned down overnight.

“Nobody is putting out the fires,” he said. “My neighbor’s home burned and I saw sparks on my roof and then my house started to burn.”

Lacking water to fight the fire, he could only watch. “We should never surrender,” he said. “We will never live under the Russians again.”

There were also few signs the Ukrainian government had established even rudimentary civilian services in the towns it is attempting to recapture.

A woman who also offered only her first name, Elena, arrived at an aid station on the evacuation route out of Irpin in tears, saying neighbors had helped her bury her adult son in her backyard because no authorities were collecting the dead.

“I just hope his grave will not be destroyed” in the artillery shelling, she said. “The men dug a grave in the garden between the roses, and put stones around it, and a cross over it.”

Still, in one sign the counteroffensive has pushed into areas previously controlled by Russian troops, a Ukrainian unit that retrieves military dead from the battlefield has now also been finding the bodies of Russian soldiers in the towns around Kyiv, according to Serhiy Lysenko, the unit’s commander.

He declined to say in which towns he had been working. For now, he said in a telephone interview, they are leaving the Russian dead in place, not wanting to take additional risks to retrieve them.

Mr. Kofman, from the CNA research institute, said “It’s clear Russia cannot achieve its initial political objectives in this war now.” He said Russia must shift its goals or alter its military strategy “if it wants to sustain this war on scale beyond the coming weeks.”

AUSTIN, Texas--(BUSINESS WIRE)--As the first multifamily management company to be recognized in the Public Relations and Marketing Excellence Awards, … END_OF_DOCUMENT_TOKEN_TO_BE_REPLACED

There have been whispers of cooling housing and rental prices in the San Francisco Bay Area, but that hasn't yet translated into practical, noticeable … END_OF_DOCUMENT_TOKEN_TO_BE_REPLACED

Cars pass in Independence Square at twilight in Kyiv, Ukraine, Monday, Oct. 31, 2022. Rolling ... [+] blackouts are increasing across Ukraine as the … END_OF_DOCUMENT_TOKEN_TO_BE_REPLACED