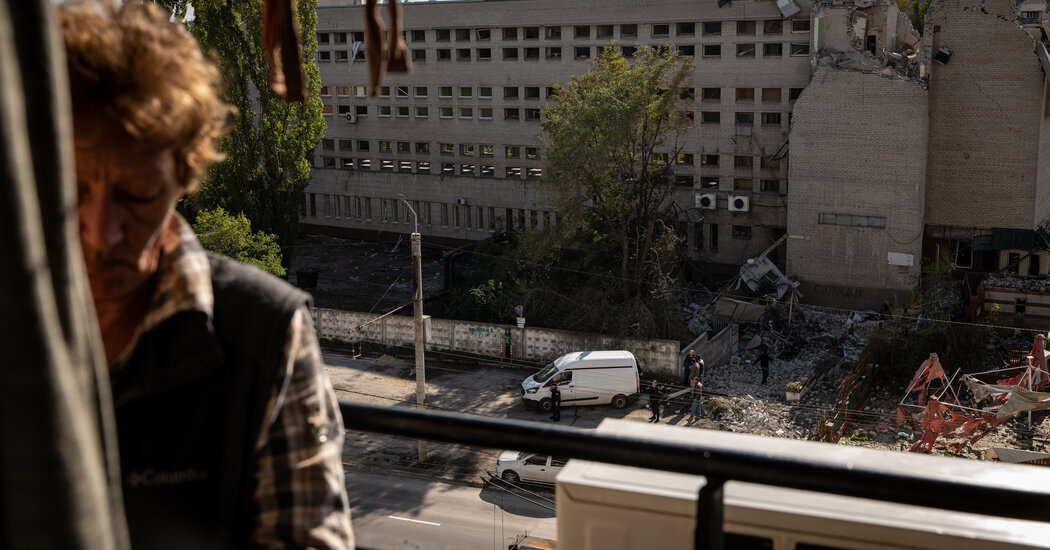 A top British intelligence official will warn in a speech on Tuesday that while Russia’s aggression has created an urgent threat, China’s expanding use of technology to control dissent and its growing ability to attack satellite systems, control digital currencies and track individuals pose far deeper challenges for the West.

In an interview on Monday ahead of his address, the official, Jeremy Fleming, who heads GCHQ — the British electronic intelligence-gathering and cyber agency made famous for its role in breaking the Enigma codes in World War II — also said he was skeptical about how far China would go to support Russia’s aggression.

“I don’t think that this is a ‘relationship without limits,’” he said, using the term that President Vladimir V. Putin of Russia and President Xi Jinping of China employed when they met at the Beijing Olympics early this year, just before the invasion of Ukraine. In light of Russia’s dismal battlefield performance and its brutality, he said, China “needs to be weighing up the advantages and disadvantage of continuing to align themselves strongly with Russia.”

Mr. Fleming’s agency — formally called Government Communications Headquarters, the counterpart to the National Security Agency in the United States — plays an increasingly central role in tracking Russian communications and preparing for the day when China’s advances in quantum computing may defeat the kinds of encryption used to protect both government and corporate communications.

Mr. Fleming has gone further, detailing the capabilities and rules surrounding Britain’s use of offensive cyber capabilities, which it employed in Syria against terror groups and reportedly against Russian forces in Ukraine, a subject Mr. Fleming declined to discuss.

Yet in the interview, he described Russia as “a disrupter” that was “unpredictable in its actions at the moment.” But he said the performance of Russia’s military had revealed deep weaknesses, and excerpts from his forthcoming speech describe Mr. Putin’s decision-making as “flawed,” its forces as “exhausted” and its reliance on mobilizing 300,000 “inexperienced conscripts” as evidence of Mr. Putin’s “desperate situation.”

“The Russian population has started to understand that, too,” he argued. “They’re seeing just how badly Putin has misjudged the situation.”

He added, “They’re fleeing the draft, knowing their access to modern technologies and external influences will be drastically restricted.”

But Mr. Fleming’s warning is another reminder of the speed at which the Western allies have come to view themselves as in direct competition, and sometimes in conflict, with both of the world’s other major nuclear superpowers. Of the two, he clearly regards Russia as the more manageable.

Until recent years, most European nations have been muted in their public critiques of Beijing and its ambitions, because trade with China became critical to growth, especially for Germany. Britain even permitted Huawei, the Chinese telecommunications giant that the United States fears could pose a security threat, to provide some 5G equipment to Britain’s communications network — under some strict conditions — until sanctions imposed on the company by the United States made that impossible.

Mr. Fleming’s warnings about the strategies behind China’s investment in new technologies, and its effort to create “client economies and governments,” sound much like speeches given by his American counterparts for the past five or more years. But he spoke just before the opening of a Communist Party congress starting in Beijing on Sunday at which Xi Jinping is expected to be named to a third five-year term as the country’s top leader.

Mr. Fleming said that in the case of China, this could be “the sliding-doors moment in history,” in which the United States and its allies may soon discover that they are too far behind in a series of critical technologies to maintain a military or technological edge over Beijing.

He described China’s move to develop central bank digital currencies that could be used to track transactions as a shift that could also “enable China to partially evade the sort of international sanctions currently being applied to Putin’s regime in Russia.” He said that was one example of how China was “learning the lessons” from the war in Ukraine, presumably to apply them if it decided to move against Taiwan and prompted further efforts by the U.S. and its allies to isolate it economically.

Mr. Fleming also described China’s moves to build “a powerful antisatellite capability, with a doctrine of denying other nations access to space in the event of a conflict.” And he accused China of trying to alter international technology standards to ease the tracking of individuals, part of its effort to repress dissent, even the speech of Chinese citizens living abroad.

But his biggest warning surrounded dependence on Chinese companies that are closely linked to the state, or that would have no choice but to turn over data on individuals upon demand by the Chinese authorities. The Huawei experience, he said in the interview, “opened our eyes to the extent to which even the biggest businesses in China are ultimately wrapped up with the Chinese state” and have no choice but to comply “because of the way in which the Communist Party works and the national security laws operate.”

Yet in the Huawei case, the United States and its European partners have yet to offer truly competitive alternatives for much of the company’s networking equipment, officials from many countries say. “We have to be able to provide alternatives,” Mr. Fleming said. When pressed on whether Europe and the United States had provided those alternatives in the years since the campaign against Huawei gained traction, he acknowledged, “No, we don’t.”

Last week, the Biden administration announced sweeping new limits on the sale of semiconductor technology to China, hoping to cripple Beijing’s access to critical technologies that are needed for supercomputers, advanced weapons and artificial intelligence applications.

It was a sign of how fast the world’s two largest economies had become engaged in a clash over technological advantage, with the United States trying to establish a stranglehold on advanced computing and semiconductor technology that China views as essential to its own ambitions.

But Mr. Fleming conceded that over the next few months, he would be focused — as American leaders are — on the question of whether Russia might seek to use a tactical nuclear weapon in Ukraine to make up for its failures on the battlefield.

“This is a concerning moment,” he said. But he noted that Mr. Putin had been cautious and “has been careful not to escalate beyond the borders of Ukraine.”

“He’s been careful not to escalate in terms of the types of weapons they’re using,” he said.

He added: “We’re in a situation where escalation risks are very real.” But if “Putin decided he would make use of tactical nuclear weapons,” he said, it would be a “complete departure” from his past action and from Russian military doctrine.

AUSTIN, Texas--(BUSINESS WIRE)--As the first multifamily management company to be recognized in the Public Relations and Marketing Excellence Awards, … END_OF_DOCUMENT_TOKEN_TO_BE_REPLACED

There have been whispers of cooling housing and rental prices in the San Francisco Bay Area, but that hasn't yet translated into practical, noticeable … END_OF_DOCUMENT_TOKEN_TO_BE_REPLACED

Cars pass in Independence Square at twilight in Kyiv, Ukraine, Monday, Oct. 31, 2022. Rolling ... [+] blackouts are increasing across Ukraine as the … END_OF_DOCUMENT_TOKEN_TO_BE_REPLACED