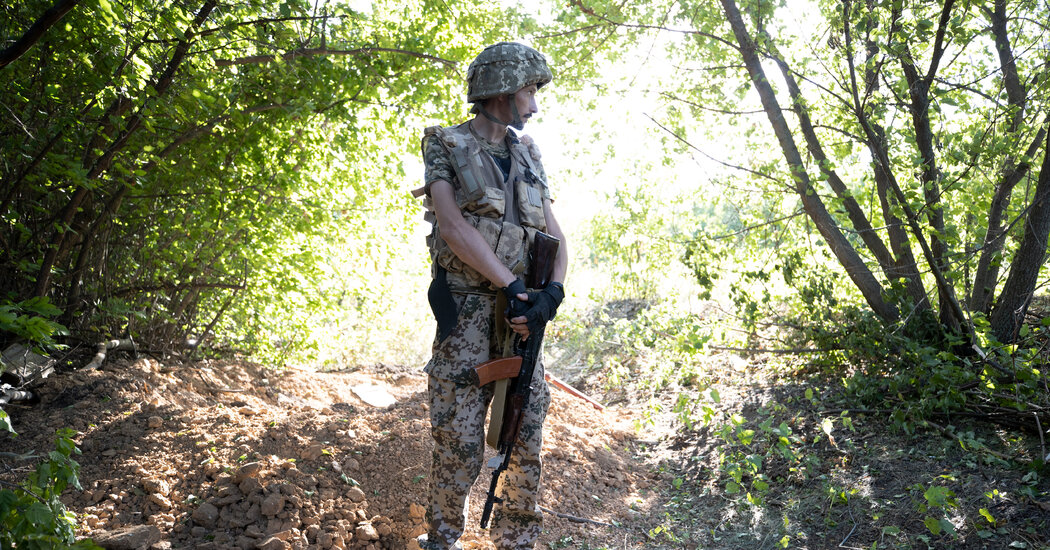 KYIV, Ukraine — Even as the Ukrainian government sought to bolster the nation’s resolve with defiant commemorations of its Independence Day, military leaders tried to brace the public for a long, bloody slog ahead as Russia appeared to be aiming to strengthen its grip on Ukrainian territory it has seized.

“It’s going to be very difficult; it’s not going to be easy,” the head of Ukraine’s National Security and Defense Council, Oleksiy Danilov, said in an interview aired Wednesday with Radio Liberty, a U.S.-funded independent news organization. “And if someone thinks that we have already passed some kind of Rubicon and that the rest will be like clockwork, unfortunately, it will not be.”

The Russian Ministry of Defense has said it was slowing the pace of its military campaign — a reflection, Western military analysts say, of the Kremlin’s need to explain the lack of military progress at home after going weeks without gaining significant new ground in Ukraine.

But Moscow continues to rain rocket strikes on the country, including on Wednesday, when two dozen people were killed in an attack on a train station in the east. And the United States warned that Moscow may try to stage “sham” referendums, possibly as soon as this weekend, in order to provide a veil of legitimacy as it moves to annex parts of the country under its control.

“We expect Russia to try to manipulate the results of these referenda under the false claim of the Ukrainian people wanting to join Russia,” John F. Kirby, the National Security Council spokesman, told reporters on Wednesday. “It will be critical to call out and counter this disinformation in real time.”

He did not offer more detail on why the United States thinks referendums could move so quickly, or what effect such a move could have on efforts to negotiate an end to the fighting. President Volodymyr Zelensky of Ukraine has previously said he would end talks with Russia if Moscow holds referendums in occupied areas.

The Ukrainian government has been urging people living under occupation to resist pressure to participate in the referendums. Its network of partisan fighters have stepped up their attacks on local Russian proxy administrations.

The Ukrainian military’s southern command said on Thursday that “local resistance prevents the Russians from taking organizational measures to prepare a fake demonstration of will.”

The concern about Moscow’s referendum planning underscores the steep challenges Ukraine faces as it seeks to translate losses it has recently inflicted against Russian forces into successfully regaining territory. Moscow is now estimated to control some 20 percent of Ukraine.

Strikes against ammunition depots and command centers — along with the work of partisans targeting Russian occupation forces behind enemy lines — are part of a counteroffensive as the Ukrainians seeks to both degrade Russian forces and sow chaos.

But as Mr. Zelensky and other leaders have vowed that Ukraine will win the war, they have also repeatedly urged Ukrainians living under Russian occupation to be patient.

Ukrainian forces have yet to make any major push to drive the Russians from occupied territory, and officials have said they understand they have a limited amount of time to take advantage of Russia’s apparent struggles. And Ukraine, too, has lost fighters and equipment, as its civilians have suffered through frequent Russian strikes.

Mr. Danilov said the hardest days may yet lie ahead.

“We will have a big war with this country,” he said, “and we will have to put a lot of effort in order to win.”

Hometown Deli, Paulsboro, N.J.Mike Calia | CNBCThree men were charged with fraud and other crimes in a scheme involving a company that was worth $100 … END_OF_DOCUMENT_TOKEN_TO_BE_REPLACED

The childhood home of "The Morning Show" actor Nestor Carbonell recently hit the market in Greenwich, CT, for $4.4 million.Fans will appreciate that … END_OF_DOCUMENT_TOKEN_TO_BE_REPLACED