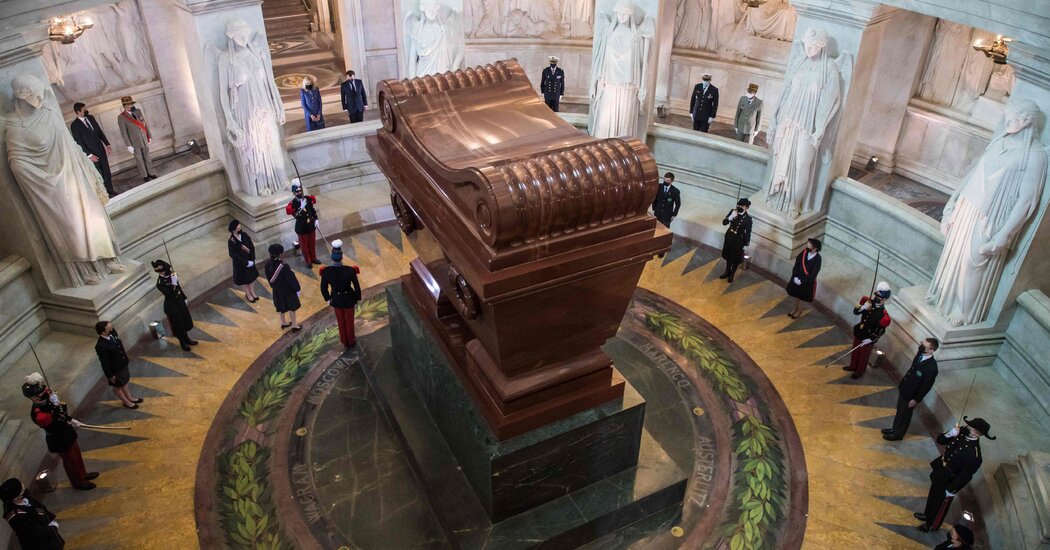 PARIS — President Emmanuel Macron of France, charting a delicate course between condemnation and celebration of Napoleon Bonaparte on the 200th anniversary of his death, said the emperor’s restoration of slavery in 1802 was a “mistake, a betrayal of the spirit of the Enlightenment.”

It was the first time a French president had specifically condemned Napoleon’s re-establishment of slavery in the Caribbean, after its post-revolutionary abolition in 1794. Mr. Macron used the word “faute,” which in French carries greater solemnity and opprobrium than “mistake” or “error” in English, something closer to an offense.

France, the only country to have ended and reinstated slavery, did not abolish slavery again until 1848. This painful history has tended to be eclipsed for many by the magnetism of the epic Bonapartist saga, which Mr. Macron described as “above all, an ode to political will.” He continued: “Without him the destiny of France would not have been the same.”

Mr. Macron’s comments came as France engages in a debate, encouraged by the president, about its colonial past, and whether the country’s universalist model, which is supposed to be colorblind, in reality masks widespread racism.

Mémoires et Partages, an organization that campaigns for a more complete reckoning with France’s colonial and slaveholding past, said that he supported the commemorations but lamented what he saw as a poor acknowledgment of Napoleon’s racism.

“I am in favor of the government commemorating Napoleon but it has a duty to say that Napoleon was a racist and this was not sufficiently apparent in Macron’s speech, who used words that were too vague,” Mr. Diallo said.

Mr. Macron spoke under one dome, at the home of the Académie Française, representing the revered quintessence of French learning, before proceeding to Napoleon’s tomb beneath the golden dome of Les Invalides. There, in a solemn ceremony, he laid a wreath of red and white flowers, before the Marseillaise was sung.

“Napoleon, in his conquests, never really cared about the loss of human life,” Mr. Macron said. “Since then, we have come to place a higher value on human life, whether in wars or pandemics.”

Millions of lives were lost as Napoleon sought to spread the anticlerical, anti-monarchical message of the French Revolution across the continent before his final defeat in 1815. That he did so as self-proclaimed emperor is only one of the many contradictions of his tempestuous life.

Mr. Macron’s speech followed the pattern he has adopted in confronting difficult passages of French history, including the Algerian war of independence: full and candid acknowledgment without repentance. It was also typical of a leader whose tendency to balance different sides of an argument is so marked that he has become known as the “at-the-same-time” president.

The president’s most serious challenger in the election next year is Marine Le Pen, the rightist leader. She chose to commemorate the anniversary with the words: “Long live the Emperor! Long live greatness!”

Mr. Macron is a centrist, but one most concerned for now by the need to head off the appeal of the extreme right. “One loves Napoleon because his life has the allure of the possible, because it is an invitation to take risks,” he said. He continued: “His life was an epiphany of freedom. Eagle and ogre, Napoleon could be at once the soul of the world and the demon of Europe.”

Napoleon has always been a contested figure in France, even in the perpetual fascination he has exerted, to the point that recent presidents have shied away from honoring him. But that is not Mr. Macron’s style.

At a moment of tense cultural confrontation over whether French universalism masks racism, he condemned Napoleon’s resort to slavery in the Caribbean in newly forthright terms, while also lauding the achievements of a national hero.

But Mr. Diallo said that France’s universalist model was still “locked into a denial” over racial issues, unable to fully acknowledge that the country had for decades promoted racist policies and slavery.

“Napoleon is the man who gave shape to our political and administrative organization, to the uncertain sovereignty that emerged from the Revolution,” Mr. Macron said. “After months of failure, with France besieged, Napoleon was able to incarnate order.”

MUSCATINE, Iowa--(BUSINESS WIRE)--HNI Corporation (NYSE: HNI) announced today its Board of Directors declared a quarterly dividend of 32 cents per … END_OF_DOCUMENT_TOKEN_TO_BE_REPLACED

Tokyo (CNN) — The Japan Tourism Agency announced on Tuesday, May 17 that it would start allowing small group tours in May as part of a "test tourism" … END_OF_DOCUMENT_TOKEN_TO_BE_REPLACED

If you’re superstitious, today is your day.That's because it's Friday the 13th (the only one of the year, in fact). It's a day when bad juju reigns … END_OF_DOCUMENT_TOKEN_TO_BE_REPLACED