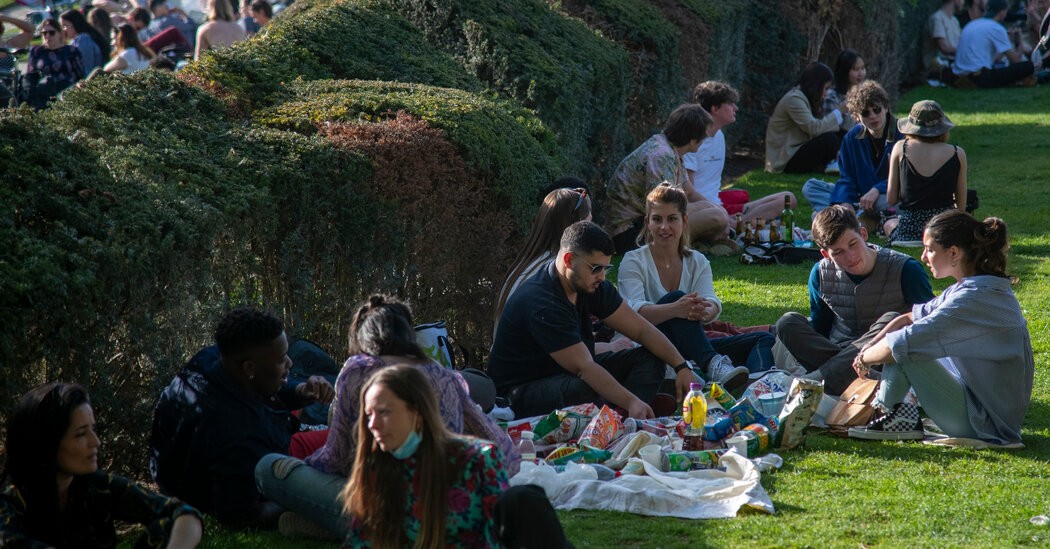 PARIS — After more than a year of lockdowns and months of a sputtering vaccination campaign, Europe’s efforts to curb the coronavirus pandemic suffered another setback on Wednesday as President Emmanuel Macron of France announced the start of a third national lockdown in a desperate move to halt a new deadly wave.

With infections surging, hospitals swelling with patients and the virus now reaching into classrooms, Mr. Macron effectively abandoned a gamble to keep France open in the hope that a steady pace of vaccinations would make a lockdown unnecessary. He said that restrictions currently covering areas with about one-third of the country’s population would be extended nationwide, and that schools would be closed for three weeks.

As the tally of coronavirus deaths relentlessly pushed close to the 100,000 mark, Mr. Macron gave in to scientists and opposition politicians who had been pressing for a lockdown in recent weeks, and joined the list of European nations already hunkering down before the virus.

disarray of the rollout of the AstraZeneca vaccine. Both political opponents and some scientists said he had “lost his gamble.’’

For Mr. Macron, the timing of Wednesday’s announcement was particularly significant: the introduction of yet more restrictions a year after France’s first lockdown and a year before presidential elections in which voters are expected to judge his presidency on his handling of the pandemic.

Bruno Cautrès, a political scientist at the Center for Political Research at Sciences Po in Paris, said that the handling of the coronavirus crisis had become a political challenge for Mr. Macron, who has long promised to make government effective and who had “taken personal responsibility’’ in opposing a third national lockdown.

data from The New York Times.

Despite the worsening situation, Mr. Macron has argued that his gamble in January had not been wrong because his decision had not led to the explosion of cases that had been predicted.

Antoine Flahault, the director of the Institute of Global Health at the University of Geneva, said that the French government had generally followed the advice of scientists until late January. But, on Jan. 29, Mr. Macron rejected the advice of his own scientific council — a government body that the president had set up last year to advise him on coronavirus issues and that had pressed for a strict four-week lockdown to prevent a third wave of contaminations.

Mr. Flahault said that despite the government’s decision to keep things open, no new measures were put in place to prevent the resurgence that followed.

The government responded to the worsening situation in mid-March by measures that were described in the news media as a third “lockdown’’ but that Mr. Macron’s government tried to portray in other terms. Among restrictions that affected a third of the French population, businesses considered nonessential were forced to close, people had their outdoor activities limited to within six miles of their homes, and travel to and from affected regions was banned.

Le Monde. “It’s not an inaccessible subject for an intellect like his and given the significant time he’s devoted to it for several months.’’

Le Monde related how people close to Mr. Macron “were impressed by the mastery of the head of state, who has kept up with numerous research studies on the subject of the coronavirus.’’ According to the article, Mr. Macron was now capable of “challenging” his own health minister and experts.

“Emmanuel Macron wanted to instill a rather heroic narrative about himself,’’ said Mr. Cautrès, the political scientist. “He is the one who faces all the storms, all the difficulties.’’

Phil Shell loves the Bay Area and its real estate market. He’s been building his career here as an agent over the past eight years, but even he hasn’t … END_OF_DOCUMENT_TOKEN_TO_BE_REPLACED

DS4 Cross DS The Plug-in hybrid seems the perfect answer to the electric car dilemma; battery power for all your local needs and a traditional motor … END_OF_DOCUMENT_TOKEN_TO_BE_REPLACED