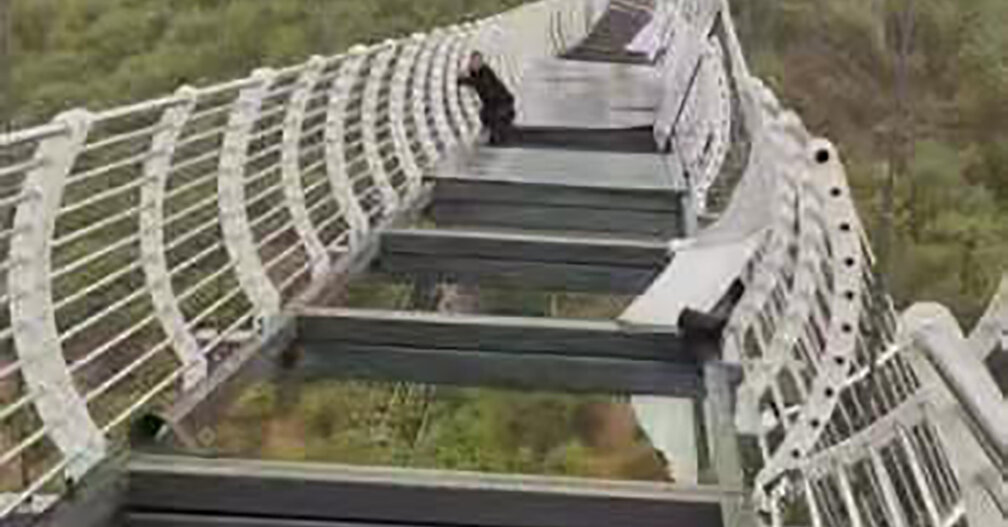 A man who ventured out on a glass-bottom bridge in China’s northeast was left clinging to the side for dear life after gale-force winds blew away some floor panels, leaving gaping holes in the structure hundreds of feet above the ground, local officials said.

The episode occurred on Saturday at Piyan Mountain in Longjing, China, state media said, citing the city government. It spurred a frantic attempt to rescue the man, whom the authorities did not identify. He inched his way to safety, helped or coaxed — news accounts varied — by a rescue crew. A photo of what state media said was the moment of terror went viral.

The harrowing episode left many people in China deeply rattled, spurring discussions about what could have been a nightmarish ending and raising questions about the safety of many of the country’s glass bridges, walkways and viewing decks.

“This is exactly why I dare not step on a bridge like that,” one tourist identified as Wadetian wrote on Weibo, the Chinese social media site. “I broke out in a cold sweat just looking at it,” another user said.

Up to 1,500 people have crossed at a time, and the bridge is advertised as offering an experience akin to “hanging above a bottomless chasm.”

According to state media reports, around 12:45 p.m. Saturday, winds of up to 90 miles per hour tore through the picturesque tourist site, blowing out parts of the glass deck and trapping the man, described as a tourist.

reported, adding that the site of the accident had since been closed while inspectors checked for hazards.

new standards for building the attractions started this month.

In fact, it was after Mr. Johnson won the high jump that Hitler left the stadium in Berlin, before Mr. Johnson received his medal, even though earlier … END_OF_DOCUMENT_TOKEN_TO_BE_REPLACED

Listed for $2,975,000 at the beginning of the month, this architectural delight in Virginia Beach had its price trimmed by $125,000 last week. Located … END_OF_DOCUMENT_TOKEN_TO_BE_REPLACED