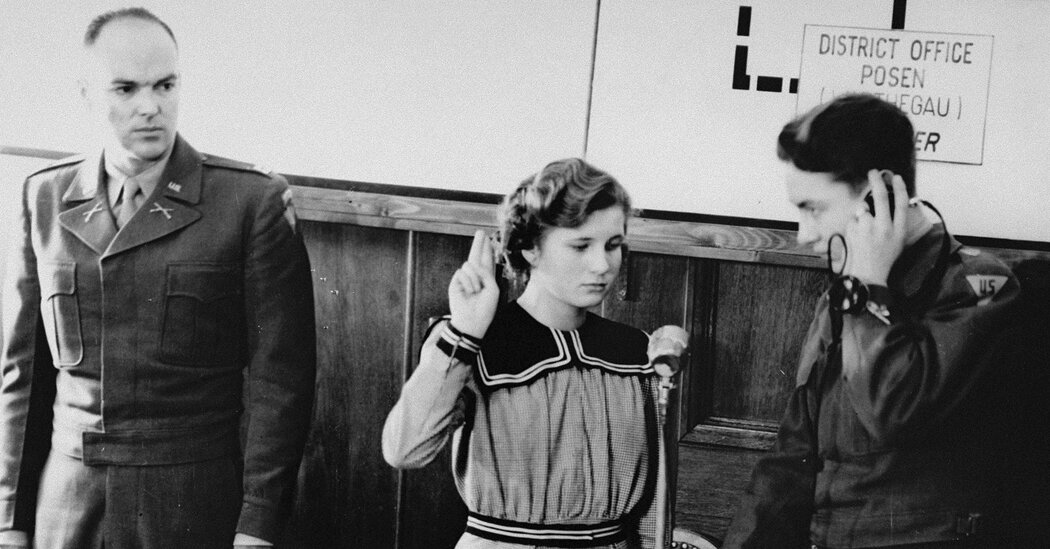 And her mother was dying of tuberculosis.

“We recognized each other instantly, but we couldn’t talk to each other because I spoke only German and had forgotten the Czech language,” she told BBC Radio in 2012 about their reunion. “We had to have a translator from Lidice who helped us to talk, and my mother told me that she always believed I had lived and that she would see me again.”

After her mother’s death in Prague in late 1946, Marie went to live with an aunt in Kladno. She graduated from a nursing school in Ostrava.

She bore witness to her Holocaust experience when she testified in October 1947 at the Nuremberg trial of members of the SS Race and Resettlement Main Office. Then only 15, Marie was one of three people — two teenagers and one middle-aged woman — to testify that day about the massacre and their lives afterward.

By the mid-1950s, she was married to Frantisek Supik, adopting the feminine version of his surname, and had a daughter, Ivana. They moved from Ostrava to Lidice, which was being rebuilt, in 1955. She took on a series of local administrative jobs and was the secretary of the Lidice National Committee, which took care of the operation and maintenance of the village.

And she continued to tell her story, often to children. In July 2018, she and her great-granddaughter, Karolina, then 10, laid a bouquet on the gymnasium floor at the high school in Kladno to mark the location where the Gestapo separated Marie from her mother in 1942.

In addition to her daughter and her great-granddaughter, Mrs. Supikova is survived by two grandchildren and three great-grandsons. Her husband, a roofer, died in 1990.

Before Mrs. Supikova’s mother died, she took her daughter to the ruins of Lidice.

“She told Marie, ‘We’re going to see your father,’” said Elizabeth Clark, a retired journalism lecturer at Texas State University, San Marcos, who is writing about Lidice for a faculty writing project. “Marie didn’t understand at first that they were going to the mass grave where he had been buried.”

AUSTIN, Texas--(BUSINESS WIRE)--As the first multifamily management company to be recognized in the Public Relations and Marketing Excellence Awards, … END_OF_DOCUMENT_TOKEN_TO_BE_REPLACED

There have been whispers of cooling housing and rental prices in the San Francisco Bay Area, but that hasn't yet translated into practical, noticeable … END_OF_DOCUMENT_TOKEN_TO_BE_REPLACED

Cars pass in Independence Square at twilight in Kyiv, Ukraine, Monday, Oct. 31, 2022. Rolling ... [+] blackouts are increasing across Ukraine as the … END_OF_DOCUMENT_TOKEN_TO_BE_REPLACED