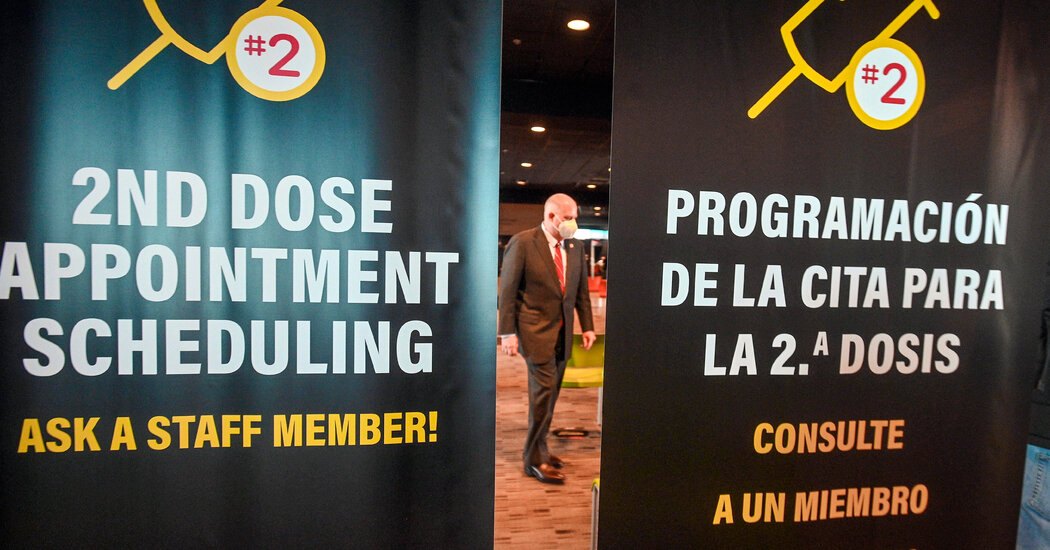 The order allows bars, restaurants, churches and gyms to open back up to full capacity starting Friday evening, though with certain social distancing regulations still in place. It also allows larger venues like banquet halls, theaters and sports stadiums to open to the public at 50 percent of capacity. The statewide mask mandate remains in effect.

“With the pace of vaccinations rapidly rising and our health metrics steadily improving, the lifting of these restrictions is a prudent, positive step in the right direction and an important part of our economic recovery,” Mr. Hogan said. He was joined at his announcement by Dr. Robert R. Redfield, a former director the Centers for Disease Control and Prevention, who is now a senior adviser to the governor.

Some business owners applauded the announcement as a sign that they may be able to begin crawling out of an economically punishing year. Public health experts were less welcoming.

said in a tweet that county “emergency powers and authorities” established during the pandemic were unaffected.

County and city officials spent Wednesday reading their local charters and talking with their lawyers about the situation.

In an emailed statement, Baltimore County Executive John A. Olszewski, Jr., said, “leaders across Maryland have been forced to scramble to meet with our legal teams, health officials, and neighboring jurisdictions to understand how this impacts our own executive orders and to determine if and how to use our own local authority moving forward.”

New York Times database, and somewhat above average in the number of new cases it has been reporting lately relative to its population — 13 per 100,000 residents. All three of the variants of the virus that are being tracked by the C.D.C. have been reported there, but only one in significant numbers: B.1.1.7, which was first identified in Britain and is more transmissible and possibly more lethal than earlier versions of the virus.

In the early days of the pandemic, Governor Hogan drew bipartisan praise for his aggressive response. He was among the first governors in the country to order schools closed, and he publicly criticized President Trump, a fellow Republican, for leaving states unprepared to deal with the pandemic. “I think a lot of us locally and around the country would have rated him very highly,” Dr. Wen, former Baltimore health commissioner, said.

Her estimation has fallen considerably since then. While she said she was pleased that Mr. Hogan did not lift his statewide mask order, as fellow Republican governors in Texas and Mississippi did last week, she called the broad lifting of capacity restrictions a dangerous gamble.

“It’s really disappointing, because we’ve come so far,” she said. “Why are we letting down our guard down when we’re so close?”

SAN FRANCISCO — Cleve Jones has lived in the Castro neighborhood for nearly 50 years, almost from the day he graduated from high school in Phoenix and … END_OF_DOCUMENT_TOKEN_TO_BE_REPLACED

A home inspection can spare you from unpleasant surprises after you buy. After crunching the numbers, searching your favorite neighborhoods, and … END_OF_DOCUMENT_TOKEN_TO_BE_REPLACED