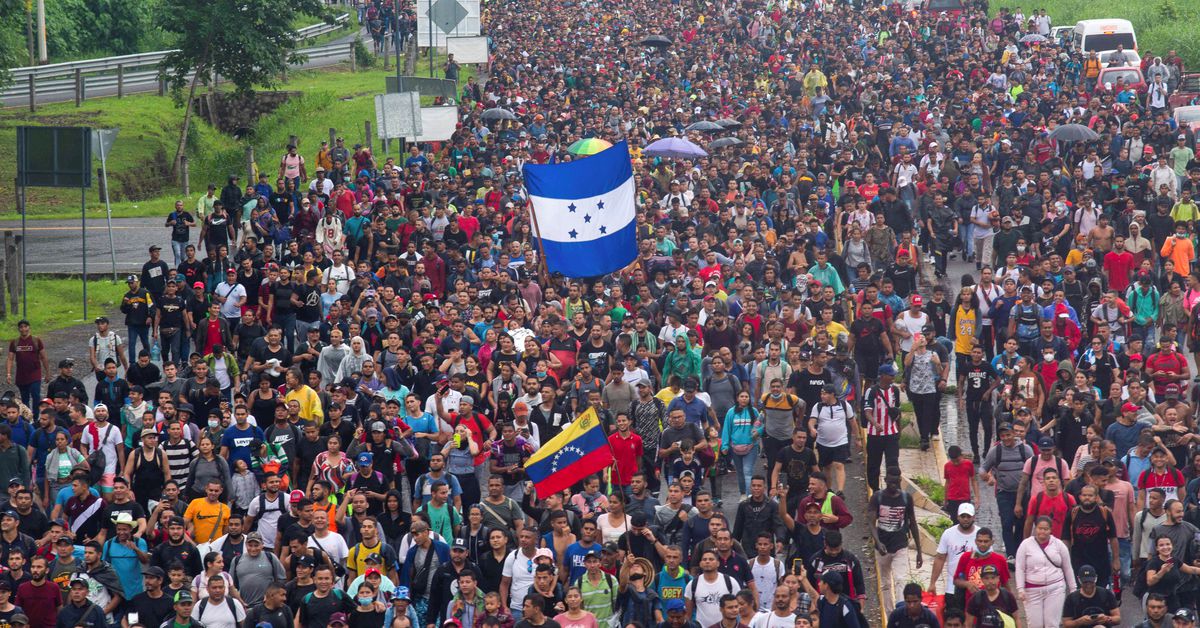 TAPACHULA, June 6 (Reuters) – Several thousand migrants, many from Venezuela, set off from southern Mexico early Monday aiming to reach the United States, timing their journey to coincide with the Summit of the Americas in Los Angeles this week.

Migration activists said the group could be one of the region’s largest migrant caravans in recent years.

At least 6,000 people, according to Reuters witnesses, left the border city of Tapachula. Mexico’s National Institute for Migration did not provide an estimate of the group’s size and provided no additional comment on the caravan.

Caravan organizer Luis Garcia Villagran said the group represented various nationalities of people fleeing hardship in their home countries, including many from Venezuela.

“These are countries collapsing from poverty and violence,” he said. “We strongly urge those who attend the summit … to look at what is happening, and what could happen even more often in Mexico, if something is not done soon.”

Migrants walk in a caravan to cross the country to reach the U.S. border, as regional leaders gather in Los Angeles to discuss migration and other issues, in Tapachula, Mexico June 6, 2022. REUTERS/Quetzalli Nicte-Ha

U.S. President Joe Biden is expected to announce a regional pact on migration later in the week.

The migrants, including many children, began their trip early under rainfall and fanned out across several lanes of highway, with some wearing plastic ponchos and holding umbrellas, Reuters images show.

Large caravans headed to the United States also traveled across Mexico in 2018 and 2019, mostly comprised of Central Americans, followed by smaller groups in recent years.

Colombian migrant Robinson Reyes, 35, said he hoped the group would attract the attention of leaders at the summit.

“We want a future for our children … we want to cross Mexico without any problems,” he said. “God willing, they can talk and resolve this.”

AUSTIN, Texas--(BUSINESS WIRE)--As the first multifamily management company to be recognized in the Public Relations and Marketing Excellence Awards, … END_OF_DOCUMENT_TOKEN_TO_BE_REPLACED

There have been whispers of cooling housing and rental prices in the San Francisco Bay Area, but that hasn't yet translated into practical, noticeable … END_OF_DOCUMENT_TOKEN_TO_BE_REPLACED

Cars pass in Independence Square at twilight in Kyiv, Ukraine, Monday, Oct. 31, 2022. Rolling ... [+] blackouts are increasing across Ukraine as the … END_OF_DOCUMENT_TOKEN_TO_BE_REPLACED