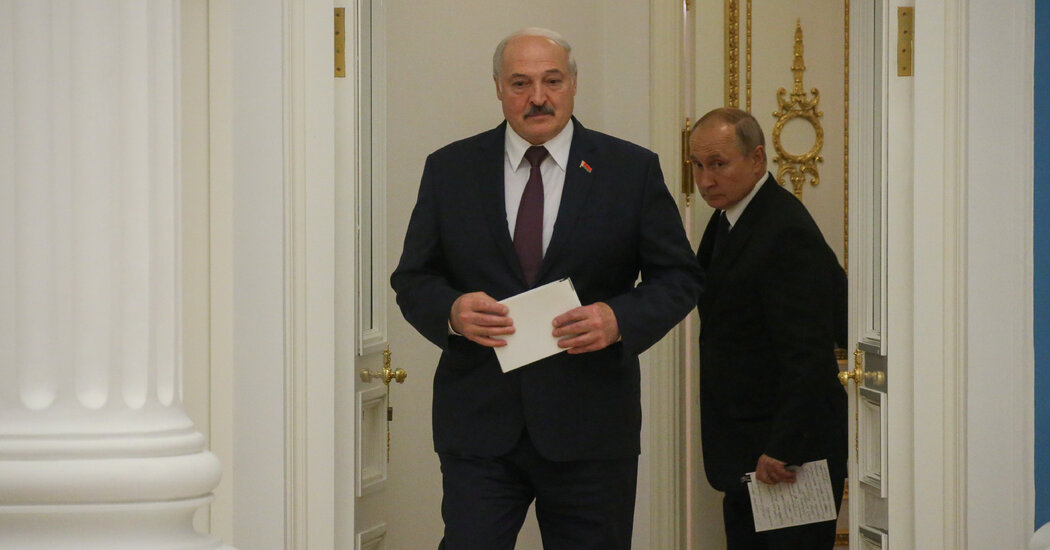 MOSCOW — As European governments threatened Belarus with deeper sanctions this week for fomenting the migration crisis on the Belarusian-Polish border, its bombastic leader countered with what sounded like a trump card: he could stop the flow of gas to the West.

There was just one problem: It wasn’t his gas to stop.

So on Friday, Russia — which sends much of its gas to Europe via Belarus — had to set the record straight for the Belarusian president, Aleksandr G. Lukashenko.

“Russia was, is and will remain a country that fulfills all of its obligations in supplying European customers with gas,” the spokesman for President Vladimir V. Putin told reporters.

With thousands of migrants still stranded in the frigid cold on the edge of the European Union — encouraged by Belarus to go there but barred by Poland, an E.U. member, from crossing its border — the complex relationship between two allied autocrats looms large over the crisis. The mixed messaging over Russia’s natural gas exports was the latest sign that even as Mr. Putin continues to back Mr. Lukashenko, it is the Belarusian leader — a strongman who once ran a Soviet collective farm — who keeps raising the stakes.

the forced landing of a European passenger jet with a Belarusian dissident on board, Mr. Lukashenko seemed to have no choice but to bow to his Kremlin benefactors and to assent to deeper integration with them.

suggested they were ready to “start a conflict.”

several airlines on Friday said they were limiting flights to Belarus from the Middle East, where most of the migrants have traveled from. They include Turkish Airlines, one of the largest carriers to offer flights to Minsk, the Belarusian capital.

At the same time, aid groups described dire conditions for migrants huddled at the border, struggling against the cold and threats of violence. One Iraqi couple and a Syrian man were beaten and robbed, according to the activist coalition Grupa Granica.

The migration crisis comes amid the backdrop of rising tensions between Russia and Belarus’s southern neighbor, Ukraine — a onetime Russian ally that broke away in its pro-Western revolution in 2014. Ukraine’s turn looms large for Moscow, a cautionary tale that the Kremlin is determined not to repeat.

A migrant crisis. Gatherings of migrants along the European Union’s eastern border have led to an escalating standoff between Belarus and the E.U. Here’s what to know:

European accusations against Belarus. E.U. leaders claim that Aleksandr G. Lukashenko, the autocratic leader of Belarus, has engineered the crisis to punish European countries for harboring his opponents and imposing sanctions.

Fears of a humanitarian crisis. The migrants are stranded in the thick forests that straddle the border, facing bitter cold and an approaching winter. They are unable to enter the European Union or go back into Belarus. Several have already died from hypothermia.

“Putin took Crimea, which is very good, but Putin lost Ukraine,” Mr. Markov, the pro-Kremlin analyst, said. “If he also loses Belarus, he will never be forgiven for it.”

Mr. Lukashenko has ruled Belarus since 1994, and for years profited from the competition between Russia and the West for influence in his country, provoking deep frustration in Moscow. That game ended last year, when he declared a landslide re-election victory in a vote widely seen as fraudulent, leading the E.U. to impose sanctions that continue to rankle him.

With Mr. Lukashenko’s opponents seen as too pro-Western, the Kremlin backed him despite its reservations — saving Mr. Lukashenko’s regime but saddling Mr. Putin with an ever-more-erratic ally.

In Moscow, many expected the Kremlin’s backing to translate into tighter integration into a “union state” between Russia and Belarus that would have magnified Mr. Putin’s geopolitical sway. But those talks ended earlier this fall without an agreement on a common currency or legislature — signaling that Mr. Lukashenko was able to retain his independence.

Mr. Putin and Mr. Lukashenko, both in their late 60s, share a worldview focused on a two-faced, decadent West. Both have overseen harsh crackdowns on dissent in the last year. The 2020 uprising against Mr. Lukashenko in a neighboring, Russian-speaking country spooked the Kremlin, Russian analysts say, and helped prompt Mr. Putin’s decision to dismantle the movement of the opposition leader Aleksei A. Navalny.

Mr. Lukashenko’s approach toward migration shows how he has sought to maneuver between Russia and the West. In 2018, he boasted that his country’s border guards were significantly reducing the trafficking of migrants and drugs into the European Union. In recent months, he has swerved the other way, with Western officials saying he has orchestrated a wave of migration through the Minsk airport toward his country’s borders, hoping to embarrass the E.U. into legitimizing him.

On the ground in Minsk, the human toll of that strategy is evident.

When large numbers of asylum seekers began arriving over the summer, a rights activist in Minsk said, they came as part of organized tour groups with reservations at the Yubileyny — a hotel complex operated by the presidential administration of the Republic of Belarus.

Now, they are starting to run out of money, Alena Chekhovich, the activist in Minsk, said in a telephone interview, with some forced to sleep on the street. Others relocated to hostels in the city center, even with expired visas — another sign, Ms. Chekhovich claimed, that the Belarusian government, which typically watches closely for migration violations, was exacerbating the crisis.

Ms. Chekhovich said many migrants who make it from Minsk to the border are basically marooned in makeshift camps there, monitored by Belarusian border guards who prevent them from returning.

“It’s sad that people are ending up in this situation simply because of the actions of the state,” she said.

AUSTIN, Texas--(BUSINESS WIRE)--As the first multifamily management company to be recognized in the Public Relations and Marketing Excellence Awards, … END_OF_DOCUMENT_TOKEN_TO_BE_REPLACED

There have been whispers of cooling housing and rental prices in the San Francisco Bay Area, but that hasn't yet translated into practical, noticeable … END_OF_DOCUMENT_TOKEN_TO_BE_REPLACED

Cars pass in Independence Square at twilight in Kyiv, Ukraine, Monday, Oct. 31, 2022. Rolling ... [+] blackouts are increasing across Ukraine as the … END_OF_DOCUMENT_TOKEN_TO_BE_REPLACED