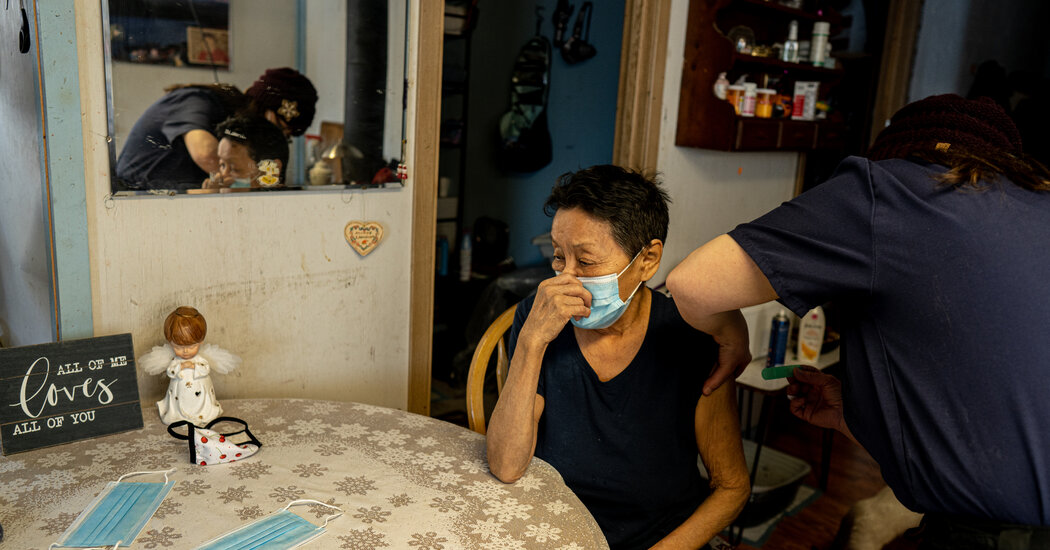 As vaccine production and deliveries and inoculations ramp up, a growing number of U.S. states are allowing ever more people to get vaccinated, providing optimism for those who have been waiting for their moment.

Anyone age 16 and older who lives or works in Alaska became eligible on Tuesday evening after the state became the first in the country to allow the maximum possible number of residents access to a vaccine. Next week, Texans age 50 and older will be eligible, the state’s health department announced on Wednesday, the same day Gov. Brian Kemp of Georgia said that people in that state over 55 would be able to get a shot next week.

New Yorkers age 60 and older became eligible on Wednesday, with Gov. Andrew M. Cuomo citing increased supply from the federal government. The governors of Minnesota and Ohio also said this week that they would open eligibility to larger groups of residents.

Minnesota’s governor, Tim Walz, said his state “moved quickly to use more vaccine from the federal government” and was set to meet its goal this week of vaccinating 70 percent of people 65 and older in the state. That allowed him to expand eligibility to the state’s next two phases at the same time — and “weeks ahead of schedule.”

conditions that confer access in one state may not do so in another.

The pace of vaccinations has picked up to the point where the daily average of individual shots has reached about 2.17 million a day. On March 6, the Centers for Disease Control and Prevention reported that 2.9 million shots had been delivered.

Should the pace hold or even increase, the adult American population of about 260 million could be fully vaccinated within months, either by Johnson & Johnson’s single-dose vaccine or by the two-dose series made by Pfizer-BioNTech and Moderna. About 62.5 million Americans have received at least one dose and about 32.9 million of that number have been fully vaccinated, according to the C.D.C.

President Biden has steadily moved up the nation’s inoculation timeline as the vaccine makers have increased production — in Johnson & Johnson’s case, by entering a partnership with a longtime rival, Merck. After announcing last week that the U.S. would have enough vaccine available by the end of May for every American adult, on Wednesday, Mr. Biden said that he was directing the federal government to secure an additional 100 million doses of Johnson & Johnson’s vaccine.

The White House said that the additional doses could help the country begin to vaccinate children after the necessary clinical trials are completed. The doses could also, if necessary, be used as boosters or be reformulated to combat emerging variants of the virus.

some clinics in the Navajo Nation, which underwent harsh lockdowns this summer and suffered from a surge in cases, anyone 16 and older can get a vaccine. And in Gila County, Ariz., any resident over the age of 18 can walk into a clinic and get a shot.

But vaccine hesitancy remains a potential obstacle to the nation’s energized vaccination campaign. Health officials in Alaska have said that hesitancy, combined with confusion about eligibility, had left unfilled appointments, which may have factored into the governor’s decision to swing the doors to the vaccine wide open.

While Alaska has fully vaccinated 16 percent of its population, the highest rate in the country, according to a New York Times database, the state ranks 46th in vaccine administration, having used only 69 percent of its supply.

In the grand sweep of world history, the U.S. is a young country. Even so, there are plenty of homes built prior to the American Revolution that still … END_OF_DOCUMENT_TOKEN_TO_BE_REPLACED

DONETSK REGION, Ukraine — Between the cracks of mortar fire and the metallic bangs of Russian self-detonating mines, Yurii, a Ukrainian Army medic, … END_OF_DOCUMENT_TOKEN_TO_BE_REPLACED