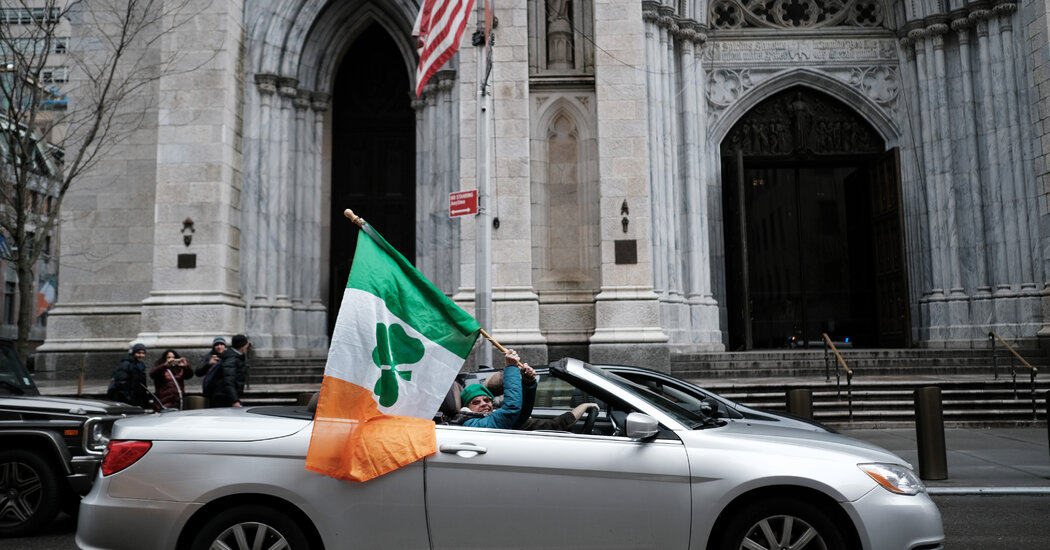 The pandemic in the United States, now more than a year old, is starting to hit some calendar milestones for a second time, including St. Patrick’s Day parades across the country. The sudden cancellation of the parades last year was one of the first big signs of how disruptive the pandemic would be to normal life in the U.S.

Though many states and cities have been tentatively loosening various Covid restrictions lately, most places have not cleared the way for a resumption of parades, which can be among the most ruthlessly effective kinds of super-spreading events.

Some places are putting a spin on the commemorations. The 37th annual parade in St. James, on Long Island, is now going to be held by car; the one in Hilton Head, S.C., is moving to the water; and the one in Pittsburgh is moving to the fall (maybe). A drive-in Celtic rock concert is planned in Dublin, Calif.; a virtual 5K run in Naperville, Ill.; and a day of green beer in plastic cups being delivered by masked servers between plexiglass screens at McGillin’s Olde Ale House in Philadelphia.

New Orleans were packed on the weekend before St. Patrick’s Day despite the cancellation of local parades, prompting stern admonitions from mayors and governors. This year, officials are pleading with people to stay at home, or at least to be vigilant when they are out.

“We are not at a point where we can start having major St. Patrick’s Day celebrations,” Dr. Allison Arwady, the commissioner of the Chicago Department of Public Health, said to reporters in a recent briefing.

Still, not everyone is resigned to laying low for another year.

In the town of Erin, Wis., population around 3,800, the short-notice cancellation of last year’s parade, the 40th, was a heartbreaker: Floats had already been prepared, and past parade kings and queens were scheduled to appear. This year, local officials and volunteers are determined to do everything they can to make a parade happen.

“It was by the end of January that we decided,” said Dennis Kenealy, a retired lawyer who is chairman of the town board. “If we can’t pull together all the health precautions, we would still cancel it. But let’s go ahead and try.”

Mr. Kenealy listed reasons the organizers felt comfortable going forward: The parade is outdoors, along a stretch of highway; spectators can line up to watch from their cars; a Wednesday morning parade will probably draw fewer people than past years; and Wisconsin is currently doing better than most of the country, both in the percentage of people fully vaccinated and the rate of newly reported cases. A statewide mask mandate remains in effect.

Still, Mr. Kenealy said he hoped that holding one of the very few St. Patrick’s Day parades anywhere this year would not make Erin a magnet for big crowds from out of town.

“I would hope not too many show up for that reason,” Mr. Kenealy said. “I mean, we’re out here pretty far. And we’re not offering an awful lot, nothing that you couldn’t see somewhere else.”

DONETSK REGION, Ukraine — Between the cracks of mortar fire and the metallic bangs of Russian self-detonating mines, Yurii, a Ukrainian Army medic, … END_OF_DOCUMENT_TOKEN_TO_BE_REPLACED

SAN FRANCISCO — Cleve Jones has lived in the Castro neighborhood for nearly 50 years, almost from the day he graduated from high school in Phoenix and … END_OF_DOCUMENT_TOKEN_TO_BE_REPLACED