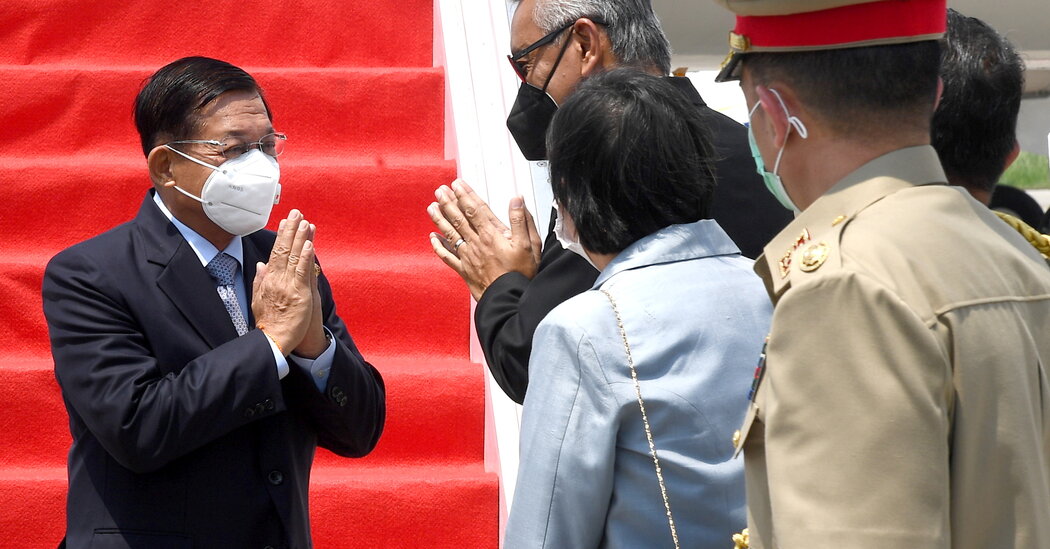 The army general who has ruled Myanmar since leading the overthrow of its civilian government arrived on Saturday in Indonesia for a meeting with leaders of other Southeast Asian nations, after some of them expressed concern about the army’s killing of hundreds of pro-democracy protesters.

It was the first time since the Feb. 1 coup that the army’s commander in chief, Senior Gen. Min Aung Hlaing, had ventured outside Myanmar. Critics feared that his presence with heads of state at the Association of Southeast Asian Nations meeting would give him the appearance of legitimacy.

Myanmar politicians who have formed what they call a National Unity Government called on Interpol and the Indonesian police this week to arrest the general upon arrival in Jakarta, the Indonesian capital, for crimes against humanity, including the ethnic cleansing campaign that drove more than 730,000 Rohingya Muslims out of the country in 2017.

The National Unity Government, which asserts that it is the legitimate government of Myanmar, also urged the 10-nation regional association, known as Asean, to give it a seat at the summit meeting and refuse to meet with General Min Aung Hlaing until he halts the killing of civilians.

targeted sanctions on regime leaders and military-owned businesses, but diplomatic efforts to stop the killing have been unsuccessful. The United Nations Security Council, where China and Russia can be counted on to support the Myanmar regime, has taken no action.

Asean, which has a policy of noninterference in the affairs of member nations, issued a statement in March calling on “all parties to refrain from instigating further violence,” seemingly ignoring the one-sided nature of the killings.

Among those expected to attend Saturday’s summit were the leaders of Indonesia, Singapore, Malaysia, Vietnam, Cambodia and Brunei. The Philippines, Thailand and Laos were expected to send representatives.

The governments of Indonesia and Malaysia have separately expressed concern about the coup, and Indonesia played a leading role in convening the meeting.

Some members of Asean, including Singapore and Thailand, have close business ties with Myanmar and its military, known as the Tatmadaw, which owns two of the country’s largest conglomerates.

Three Asean members, Thailand, Vietnam and Laos, sent representatives to the Tatmadaw’s Armed Forces Day celebration on March 27. On that day, soldiers and the police killed at least 160 protesters in its largest single-day killing spree since the coup.

slaughter of thousands in its war on drugs and Vietnam’s practice of giving long prison sentences to dissidents.

Asean stood by in 2017 as the Tatmadaw waged a ruthless campaign of murder, rape and ethnic cleansing against Rohingya Muslims, who fled in large numbers across the border into Bangladesh, which is not an Asean member. Nearly all the Rohingya refugees are still there, living in squalid, overcrowded camps.

As the Tatmadaw’s commander in chief, General Min Aung Hlaing oversaw the military operations against the Rohingya.

International human rights groups urged Asean not to meet with the general. Rather, they said, the group should impose sanctions on the junta’s leaders, press for the release of detainees and seek an end to the killings.

“Min Aung Hlaing, who faces international sanctions for his role in military atrocities and the brutal crackdown on pro-democracy protesters, should not be welcomed at an intergovernmental gathering to address a crisis he created,” said Brad Adams, the Asia director at Human Rights Watch.

There were no arrests in three quarters of last year’s fatal shootings, according to statistics provided by Mr. Krasner’s office, even as arrests for … END_OF_DOCUMENT_TOKEN_TO_BE_REPLACED